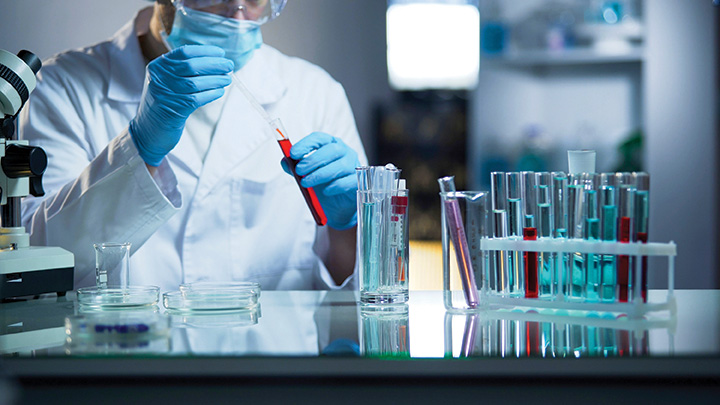 As endocrine science continues to be at the forefront of medical research, a wide array of treatment options, therapies, and products has been discovered. For the second year in a row, Endocrine News has compiled 2017’s newest items to treat a variety of endocrine disorders.

As the Endocrine Society wrapped up its first century in 2016, the first year of the Society’s next century was not without its share of medical breakthroughs in both research and science (see Eureka!) but also in new products, breakthroughs, and teamups that made waves in 2017.

“We are employing the same statistical methods that are being used in other fields such as social media and self-driving cars, but applying them to thyroid cancer diagnosis,” says Endocrine Society member Giulia C. Kennedy, PhD, Veracyte’s chief scientific officer. “Our approach uses RNA sequencing to interrogate the entire genome, and takes advantage of newer methods in machine learning to combine valuable features that provide a higher-resolution genomic picture of thyroid nodules. This enables the Afirma GSC to recognize nuances that distinguish benign from malignant nodules and which were previously not detectable.”

Increasing the number of benign nodules identified is “important because increasing the number of benign nodules directly translates to patients avoiding unnecessary surgeries,” Kennedy says. “The more you call benign, the more potential unnecessary surgeries you save. Before Afirma, [unnecessary surgeries were] a huge problem. The Afirma Gene Expression Classifier, or GEC, was the very first genomic test that actually helped solve much of that problem, and now our data suggest that the Afirma GSC — the nextgeneration version — is going to save even more surgeries. Before Afirma, people with indeterminate nodules from fine-needle aspiration cytopathology had about a 25% risk of having cancer. Therefore, doctors didn’t feel comfortable leaving those nodules in the patient. Even though it’s only a 25% risk, they would go on and have surgery, and of course, 75% of those patients would have benign nodules. So, when Afirma came on the market, our test allowed 52% of those patients to be spared an unnecessary surgery. And now this [enhanced] test has improved upon that by using some very sophisticated technology, both on the assay side and the algorithm side to raise that to 68%, which means that even more patients can safely avoid a surgery. The important word is ‘safely.’ You need a very high sensitivity and a high negative predictive value, or NPV, in order to make sure that those patients you’re calling benign are actually benign. The Afirma GSC has a fantastic NPV and high sensitivity like the first test.”

Radius Health this year announced positive results from the ACTIVExtend Trial, during which patients who had completed 18 months of abaloparatide or placebo in the ACTIVE Phase 3 trial were transitioned to receive 24 additional months of openlabel alendronate. Patients who received this sequential therapy demonstrated statistically significant fracture risk reductions through 3.5 years.

“We showed over this entire 43-month trial, in the group that received abaloparatide followed by alendronate an 84% reduction in new vertebral fractures, a 39% reduction in non-vertebral fractures, and major osteoporotic fractures were reduced by 50% compared to the group that got placebo followed by alendronate,” says Endocrine Society member Felicia Cosman, MD, osteoporosis specialist and medical director of the Clinical Research Center at the Helen Hayes Hospital, senior clinical director of the National Osteoporosis Foundation, professor of medicine at Columbia University, who is a consultant to Radius, and lead investigator of the trial. “What’s really exciting about these findings is that they show just how dramatic a benefit you can get with a short course — one and a half years — of a potent, bone-building therapy. If we could identify patients who are at high risk of fractures, based on their fracture history or their bone density, we could make a very big difference in their long-term fracture risk by starting with abaloparatide and then antiresorptive therapy.”

Two journal articles published this past year showed that the OneTouch Verio Flex blood glucose monitoring system, especially when used with OneTouch’s Reveal® mobile app, was associated with significant improvements in glycemic control. In a study published in the Journal of Diabetes Science and Technology, leading experts in self-monitoring of blood glucose tested the OneTouch Verio Flex blood glucose monitoring system and found that the “new system showed a high level of measurement accuracy.” All three lots tested met and exceeded the minimum requirements of the International Organization for Standardization 15197:2013 standard for system accuracy. This study follows the publication of another study in the April issue of this same journal that detailed the OneTouch Verio platform’s seven years of proven accuracy across more than 70,000 clinical data points.

Results suggested improved glycemic control at 12 and 24 weeks in both the meter-only and meter-plus-mobile-app groups compared to baseline, further finding that:

“Based on compelling early evidence on the use of MRIdian to treat locally advanced pancreatic cancer, we are eager to further explore the system’s capabilities and associated toxicity, local control and patient outcomes,” says Parag Parikh, MD, associate professor of Radiation Oncology at Washington University and lead investigator of the trial. “We believe MRIdian’s excellent real-time visualization of organs at risk within the abdomen and its daily treatment adaptation will allow us to deliver higher, more effective doses to the target while minimizing impact on the normal surrounding tissue. The findings of this study could truly change the standard of care for many pancreatic cancer patients.”

IBM and JDRF announced a new collaboration to develop and apply machine learning methods to analyze years of global type 1 diabetes research data and identify factors leading to the onset of type 1 diabetes in children. IBM scientists will look across at least three different data sets and apply machine learning algorithms to help find patterns and factors at play, with the goal of identifying ways that could delay or prevent type 1 diabetes in children. In order to match variables and data formats and compare the differing data sets, the scientists plan to leverage previously collected data from global research projects. Data analysis will explore the inclusion of genetic, familial, autoantibody, and other variables to create a foundational set of features that is common to all data sets. The models that will be produced will quantify the risk for type 1 diabetes from the combined data set using this foundational set of features. As a result, JDRF will be in a better position to identify top predictive risk factors for type 1 diabetes, cluster patients based on top risk factors, and explore a number of data-driven models for predicting onset.

“At JDRF, we are absolutely committed to seeing a world without type 1 diabetes, and with this partnership, we’re adding some of the most advanced computing power in the world to our mission,” says Derek Rapp, JDRF president and CEO. “JDRF supports researchers all over the world, but never before have we been able to analyze their data comprehensively, in a way that can tell us why some children who are at risk get type 1 diabetes and others do not. IBM’s analysis of the existing data could open the door to understanding the risk factors of type 1 diabetes in a whole new way, and to one day finding a way to prevent type 1 diabetes altogether.”

The ReceptivaDx test seeks to help in vitro fertilization (IVF) centers and other healthcare providers identify barriers to implantation, including one of the key underlying causes of unexplained infertility — endometriosis. Current diagnostic techniques for endometriosis require the use of laparoscopy, an invasive and expensive surgical procedure. With the introduction of the ReceptivaDx assay, endometriosis can be identified quickly and cost effectively using an endometrial biopsy sample collected during a routine office visit. Early detection of endometriosis can help guide treatment for IVF centers, ensuring higher success rates and alleviating the financial and emotional burden of a family attempting to conceive.

“ReceptivaDx is a breakthrough test and provides a unique, enhanced screening opportunity in women with unexplained infertility and unidentified causes of implantation failure,” says Endocrine Society member Bruce Lessey, MD, PhD, MS, a pioneer in reproductive medicine and related research, and a scientific advisor for CiceroDx.

The Phase 1/2 study assessed the safety and preliminary efficacy of SF0166 in 40 patients with DME who were randomized to one of two dose strengths (2.5% and 5.0% solutions) self-administered by patients as an eye drop twice-a-day for 28 days, with a 28-day follow-up period. Results from a trial of SF0166 in patients with age-related macular degeneration (AMD) remain pending.

SF0166 demonstrated biological activity in both patient groups (2.5% and 5.0% solutions), with 53% of the evaluable patients demonstrating a reduction in retinal thickness (RT), and improvements in visual acuity were also recorded. Durability of RT response to the 28-day course of therapy was observed during the month after discontinuing treatment.

There were no significant decreases in visual acuity in study eyes during treatment or follow-up and no patient required rescue treatment with an anti-VEGF injection during the treatment phase. Regular anti-VEGF injections to the eye represent current standard of care for DME (and AMD). Based on these outcomes, SciFluor has decided to proceed to Phase 2 trials for SF0166.

And new advancements continue to be made, even as this article goes to press, meaning ever-improving therapies so patients can lead healthier lives. Wonder what’s in store for 2018.