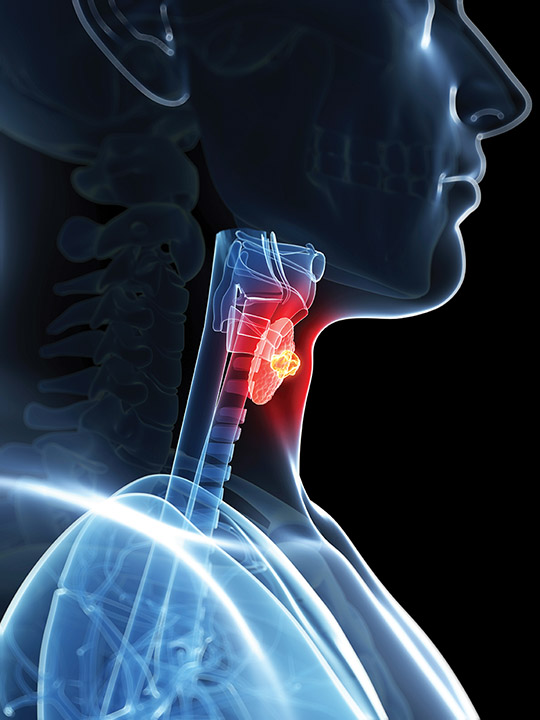 Literal headlines were made a few months ago when an encapsulated follicular variant of papillary thyroid carcinoma was classified as a non-cancerous thyroid tumor by an international panel of experts. As the debate rages on, all agree on one thing: more studies are needed.

In April, the Journal of the American Medical Association Oncology (JAMA Oncology) published a paper titled “Nomenclature Revision for Encapsulated Follicular Variant of Papillary Thyroid Carcinoma: A Paradigm Shift to Reduce Overtreatment of Indolent Tumors,” which concluded that a certain type of thyroid tumor once classified as cancer – and treated as such – should be downgraded to non-cancerous. The panel that reached this conclusion comprised experts from seven countries – 24 pathologists, two endocrinologists, a thyroid surgeon, and a psychiatrist, writing that with this change, removing the word “cancer,” patients with this tumor would be spared any unnecessary financial and psychological burden.

The tumor — encapsulated follicular variant of papillary thyroid carcinoma (EFVPTC) – used to be called a cancer, and patients with EFVPTC were frequently treated as having conventional thyroid cancer (thyroidectomy and radiation). This tumor’s nucleus does resemble cancer, but since its cells are contained within the capsule, a lobectomy is usually sufficient treatment. The panel confirmed this after conducting an international, multidisciplinary, retrospective study, and settled on renaming the tumor “noninvasive follicular thyroid neoplasm with papillary-like nuclear features” or NIFTP.

“We didn’t want to [reclassify this tumor] based on the professional opinion of experts. We wanted to do it based on data. We wanted to have data-driven reclassification, and therefore, we collected real cases from multiple countries around the world.” — Yuri E. Nikiforov, MD, PhD, vice-chair for Molecular Pathology and director, Division of Molecular and Genomic Pathology University of Pittsburgh

This new study has certainly made waves: To date, the paper has been viewed more than 120,000 times, and the New York Times published a piece covering it titled “It’s Not Cancer: Doctors Reclassify a Thyroid Tumor.” This makes sense; thyroid cancer rates continue to climb – the American Cancer Society estimates that there will be more than 65,000 new cases of thyroid cancer diagnosed in the U.S. this year, and the panel estimates that about 10,000 to 15,000 of these cases could be reclassified as NIFTP, potentially saving these patients from having the word “cancer” added to their medical files and the stigma of that word hanging over their heads.

Of course, with any study like this, which creates this much discussion, there’s bound to be some criticism. This paper was, after all, not only a scientific study, but also a position paper, and it can be difficult to unpack these two parts and separate them out.

What’s in a Name?

The reclassification itself isn’t exactly groundbreaking. These EFVPTC tumors have, for almost a decade, already been thought of as relatively less harmful than their more aggressive counterparts. In its guidelines published in January, the American Thyroid Association classified EFVPTC as “low risk” and recommended lobectomy as treatment, and that radioactive iodine (RAI) need not be administered.

“We didn’t want to [reclassify this tumor] based on the professional opinion of experts,” says Yuri E. Nikiforov, MD, PhD, vice-chair for Molecular Pathology and director, Division of Molecular and Genomic Pathology, University of Pittsburgh, and a pathology expert and lead author of this study. “We wanted to do it based on data. We wanted to have data-driven reclassification, and therefore, we collected real cases from multiple countries around the world.”

The international panel of researchers concluded that since noninvasive EFVPTC has a very low risk of adverse outcomes, they should be reclassified from cancer to the term NIFTP. “This reclassification will affect a large population of patients worldwide and result in a significant reduction in psychological and clinical consequences associated with the diagnosis of cancer,” they write.

“This paper is not going to change the management according to the new guidelines,” says Leonard Wartofsky, MD, MACP, of Georgetown University School of Medicine, editor-in-chief of Endocrine Reviews, and a member of the panel that set the American Thyroid Association’s new guidelines. “Renaming or reclassifying the tumors doesn’t change the recommendation nor does it go against what are already current trends of management, which are for less surgery and less radioactive iodine.”

But, the authors say, it’s this new name that’s reassuring to patients and clinicians, and NIFTP should imply that additional treatments and intense follow up are not necessary. Michael Tuttle, MD, of Memorial Sloan Kettering Cancer Center in New York, who was a member of both the international panel that called for reclassification of NIFTP and the ATA’s guidelines panel, agrees that what’s “new” here is the name, not the approach to treatment of this tumor. “Many of us for more than 10 years have treated this entity as a very low risk thyroid cancer that didn’t need complete thyroidectomy or RAI ablation,” he says. “But we are in the minority. Many clinicians were still giving aggressive surgery and RAI to all these lesions. So this renaming issue is largely an attempt to make it more apparent that this tumor is different from the classical papillary and follicular thyroid cancers, and it should be treated less aggressively.”

Nikiforov, who was also a member of the ATA guidelines panel, sees implications beyond the clinical management of NIFTP. Patients will no longer carry the diagnosis of “cancer” for the rest of their lives, along with its all of its physiological stress; they’ll be able to get life insurance more easily (or not lose their life insurance policies); and they’ll be able to donate blood. (Nikiforov says these are all experiences patients have shared with him.) “When patients come to see a physician to fill out their medical history,” he says, “they mark ‘cancer’; there is no box for ‘low grade cancer’ or ‘good cancer’ – many do not realize it unless directly affected.

“There are also pure medical consequences,” he continues, “Not everybody reads guidelines and follows them, and the guidelines allow for de-intensified post-surgical treatment and less frequent follow-up, but do not prescribe it. So, unless the word ‘cancer’ is eliminated from the diagnosis, a significant group of patients will remain to be overtreated.”

Wartofsky contends that thyroid experts in academic institutions (including members of the Endocrine Society) should already be following the management guidelines and not overtreating patients with NIFTP, but he does agree that removing the word “cancer” from these diagnoses does have other benefits for patients. He relates a story of a woman being held off of a heart transplant list because of her history with cancer. “So patients who are up for a kidney transplant,” he says, “if they have a diagnosis of cancer, they often fall to the bottom of the list. So this could help those people out, but we’re talking about rare kinds of things.”

“It won’t change anything I do in my practice,” says Bryan R. Haugen, MD, head of the Division of Endocrinology at the University of Colorado and chair of the ATA’s guidelines panel but not a member of the reclassification panel, “but [this reclassification] is a good thing for the field.”

Haugen says he sees this as a slow process, completely reclassifying these tumors as non-cancerous. For instance, he says, the pathologists who sat on this international panel are some of the world’s leading experts, and it may take some time before the majority are able to differentiate between invasive and noninvasive types of encapsulated tumors. And while he calls this a “tremendous undertaking,” Haugen says there will be a need for larger, confirmatory studies.

Nikiforov and Tuttle recognize that their study was relatively small, especially with the growing numbers of thyroid cancer cases, and while they agree that further and larger studies need to be done, they offer explanations as to why they only reported on 210 cases. Nikiforov points out that before this study was published, there were already 352 well-documented cases fitting the diagnosis of NIFTP reported in the literature. “[These were] summarized in the discussion of the JAMA Oncology paper, so with the additional 109 cases reported, we are talking now about more than 460 patients with the risk of recurrence <0.5%,” he says. “The working group, and specifically 24 pathology experts, had to review 268 thyroid cancer cases to identify this group of 109 cases [of noninvasive EFVPTC].”

“This renaming issue is largely an attempt to make it more apparent that this tumor is different from the run of the mill papillary and follicular thyroid cancers, and it should be treated less aggressively.” – Michael Tuttle, MD, Sloan Kettering Medical Center, New York, N.Y.

“The primary reason for the small sample size is that we have to get more than 20 pathologists to review hundreds of cases and agree that all of the tumors in the study were in fact encapsulated and had no invasion,” Tuttle says, “and more importantly, that we had at least 10 years of follow-up. While many more of these tumors existed years ago, without being able to very carefully re-examine the entire capsule under a microscope prevent us from including them into the study.”

All agree further investigation is needed. Tuttle invites feedback on the paper from the Endocrine Society, as well as other medical societies, both pro and con, in order to encourage discussion on these findings and reach a broader consensus. In the meantime, Haugen envisions some sort of hybrid name for the tumor, since he says it resembles a follicular adenoma, a precancerous tumor, which left unchecked, could develop into follicular carcinoma.

For now, Nikiforov says that the hope for the group is that this study can be used as a blueprint or prototype for other studies looking to reclassify other indolent cancers. He’s also excited at the prospect of being able to tell patients with NIFTP that they don’t have cancer after all, although he says that’s a complex situation, since some of these tumors cannot be re-examined, patients move away, or there may be a debate among the patient, his or her physician, and the pathologist.

Still, he knows there’s work to be done. “This is just a beginning of the process of adopting this new nomenclature, understanding better it’s biology and clinical implications, and getting comfortable with de-intensifying management of these patients,” Nikiforov says.

– Bagley is the associate editor of Endocrine News. He wrote about the truth behind products claiming to be BPA-free in the August issue.

At a Glance
• An international panel of more than two dozen experts has reclassified encapsulated follicular variant of papillary thyroid carcinoma as a non-cancerous thyroid tumor.
• Thyroid experts already regarded the noninvasive type of this encapsulated tumor as low risk, but the panel hopes the name change will save patients even further psychological and financial burden.
• Larger, confirmatory studies are needed, but the panel sees the study that led to the name change as a blueprint for possibly reclassifying cancerous tumors in other parts of the body.