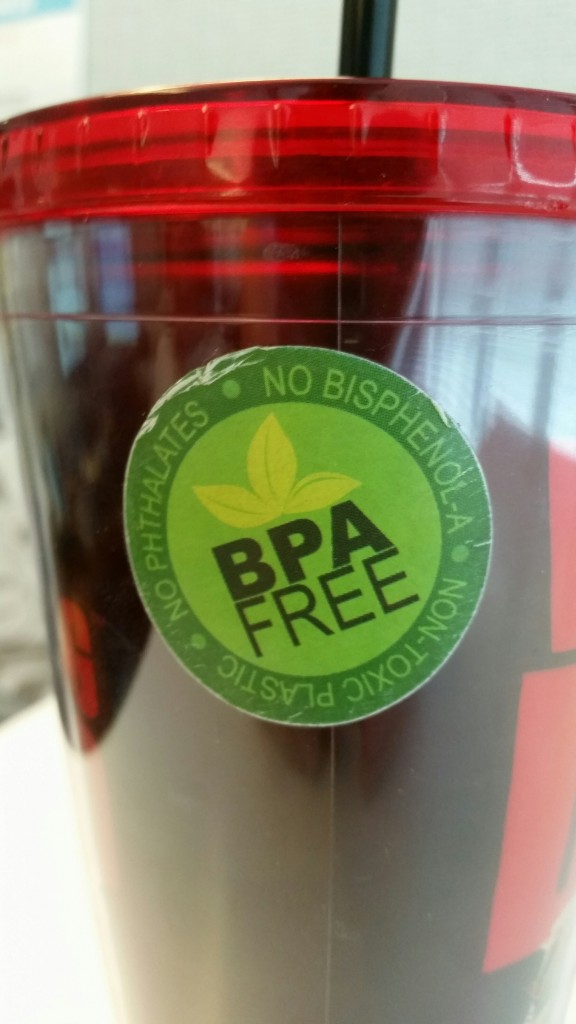 While stickers are showing up declaring certain products “BPA Free,” that doesn’t mean they’re necessarily safe. Could bisphenol S be even worse than the compound it is supposed to be replacing?

Last month in California, customers in the checkout lines in grocery stores started seeing warning signs that read, in part: “Many food and beverage cans have linings containing bisphenol A (BPA), a chemical known to the State of California to cause harm to the female reproductive system.” The label included the URL to the state’s website for Proposition 65, which requires businesses to warn Californians about exposure to any chemicals which cause cancer, birth defects, or reproductive harm.

Human exposure to BPA is as ubiquitous as the stickers showing up now that proclaim products BPA free. The chemical used to make plastic has been linked to all kinds of reproductive issues, and even thought to play a role in the development of obesity and cardiovascular events, so industry is taking some steps to correct the problem (after much wailing and gnashing of teeth on their part). These stickers read “BPA FREE” and “NON-TOXIC PLASTIC” in bold letters and usually feature leaves and a green motif, the implication being that these products are safe and healthy.

“There is a growing realization that we are poisoning ourselves with products that were designed to make our lives more convenient. And convenience is big business.” – Nancy L. Wayne, PhD, professor of physiology, David Geffen School of Medicine at UCLA, Los Angeles

But “BPA free” does not mean “EDC free” and many products now contain bisphenol S as a substitute for BPA. BPS is a similar chemical and has been found in everything from canned soft drinks to receipt paper to baby bottles. (The FDA banned BPA in baby bottles.) It’s been found in indoor dust samples and is beginning to show up in human urine, and it has been reported to be less biodegradable than BPA. Animal studies have implicated BPS in impaired offspring development. And the production of BPS is increasing annually.

“Recent studies testing BPS and comparing it to BPA show that BPS is as bad, if not worse, than BPA as an EDC,” says Andrea Gore, PhD, professor and Vacek Chair of Pharmacology at the University of Texas in Austin, and editor-in-chief of Endocrinology. “’BPA free’ can give consumers a false sense of security about the product.”

BPS studies are relatively new, and they’re following a similar trajectory to BPA and other EDC studies – aquatic species first, since these chemicals are released into the water supply, then mammalian models, and then on to human models.

According to Kimberly H. Cox, a postdoctoral fellow studying reproductive endocrinology at Massachusetts General Hospital in Boston, the effects of BPA and BPS are subtler than say, PCBs or pesticides, where exposures came at high levels, with devastating effects. The effects of BPA and BPS depend on the timing, length, and dose of exposure, and numerous studies have shown that there are effects on the reproductive system, for example, at doses of BPA much lower than what has been determined as a “safe” exposure by the EPA. And now there also seem to be effects of BPS on the development of the reproductive system, as well as the brain regions that control reproduction. “As studies continue to investigate the impacts of BPS, all of these factors (timing, dosage, etc.) will have to be taken into account,” says Cox. “Fortunately, with years of studies on BPA, I think that the new research can learn from past mistakes, standardize methods, and also make direct comparisons to better understand how these two chemicals are similar and where they differ.”

A study on BPS using aquatic species was published in Endocrinology in February, showing that BPA and BPS alter many aspects of the reproductive neuroendocrine system in zebrafish. The work was led by Nancy L. Wayne, PhD, a professor of physiology at David Geffen School of Medicine at UCLA, and Wenhui Qiu, a senior graduate student at Shanghai University, who received a Chinese fellowship to work in Wayne’s lab for a year. Wayne and her postdoctoral fellow Siddharth Ramakrishnan had shown in 2008 that BPA profoundly affected embryonic development of medaka fish, even just 24 hours after exposure.

“[Qiu] was very interested in our 2008 study, and wanted to follow-up on the impact of BPA on development of the reproductive system using our zebrafish model system,” Wayne says. “We worked out an experimental design – and she wanted to include BPS, as there were a few studies at that time suggesting that it was an EDC.”

Wayne, Qui, and their team exposed zebrafish to low levels of BPA and BPS, using the zebrafish model because the embryo is transparent, which makes it a popular model for investigating molecular genetics. “We took advantage of these characteristics by generating a transgenic zebrafish in which the GnRH3 promoter and signal sequence drives expression of a bright variant of green fluorescent protein,” Wayne says. “We are able to visualize development of GnRH3 neurons in the live embryo in real time.”

The researchers found that BPA and BPS accelerate embryonic development, increase GnRH neuron number in the forebrains of zebrafish embryos, and increase expression of reproductive neuroendocrine-related genes. Both chemicals also mimic thyroid hormones. “When endocrinologists talk about BPA, they frequently describe it as estrogenic – and do not point out the other endocrine systems that are being altered, such as thyroid hormone,” Wayne says. “Our paper emphasizes that BPA and BPS are activating both estrogenic and thyroid hormone pathways. This suggests that EDCs are having much broader effects on health and disease than just mimicking estrogens (which is bad enough).”

“’BPA free’ does not necessarily mean safer,” she continues. “It’s been marketed in that way. But when you look at the structure of BPA and BPS, there is very little difference. What were manufacturers thinking? It was merely an EDC swap.”

Cox wrote an editorial in the same issue of Endocrinology, pointing out that “Qiu et al are the first to report on direct effects of low dose developmental exposure across multiple signaling pathways” and that their work could lay the groundwork for future studies of BPS. She writes that the mounting evidence obligates the scientific community “to extend beyond traditional endpoints and pathways to more whole-system, unbiased approaches.”

Cox says that since a lot of EDC researchers got their starts conducting research in either pharmacology or endocrinology, many studies can have focused endpoints that were specific to the field of the primary investigator. “For example,” she says, “a behavioral endocrinologist might focus on the effects of EDC exposure on reproductive or social behaviors. Other systems would not be evaluated at the same time.”

Researchers may also become too focused on narrower questions, and that focus can introduce biased approaches to their studies, which, according to Cox, are things like selecting candidate genes to examine the effects of EDCs on their expression.

“While there is nothing wrong with either of these approaches, they require pieces to be put together on the back end, and for another study to be conducted to answer the next question,” Cox says. “What other behaviors are altered with the same exposures? What other genes are changing?”

So far, there are many more studies on BPA than BPS. Studies on BPA have been going on for decades, and many have reached the same conclusion – that BPA leads to negative health outcomes, which is why industry has felt the need to assuage the public’s fears with cutesy and reassuring stickers. But, and this shouldn’t come as a surprise, the plastic and chemical industries aren’t exactly thrilled with the work on BPS.

When Wayne and Qui published their paper in February, UCLA sent out a press release highlighting the results, and the media ran with it. “It made quite a splash on the Internet,” Wayne says. And then, on February 12th, Plastics Today published an article titled, “UCLA BPA/BPS Study Tainted by Plastophobia.” “The author was highly disparaging of our study, EDC studies in general, and accused me of “prideful plastophobia,’” Wayne says. “It felt like a personal attack.”

Last October, the Endocrine Society hosted a Twitter chat on EDCs. Chemical and plastic industry Twitter accounts joined in, and it got, to say the least, interesting. And it makes sense; these industries will be affected by any policy that regulates their products. But none of the researchers studying these chemicals is out to destroy these industries or the products they create; they just want to make sure these industries are producing the things that people use every day as intelligently as possible. And these researchers have some ideas on how that can happen.

Testing chemicals before they are put into consumer products seems like an elegant and simple solution. “While we may never be able to test for every possible outcome, this would be a really important way for chemical companies to at least make sure that known pathways affected by other EDCs are not likely to be impacted by their products,” Cox says.

But just because it seems like a simple answer, that doesn’t mean it will be an easy answer. Gore agrees that only by testing before a chemical is introduced into products that come into contact with food and beverages and lotions and personal care products and intravenous tubing and on and on, only then can we be confident that a consumer product is free of EDCs. “However, that is not how we do testing in this country,” she says, “so that system will need to change.”

Wayne says she would like to see future EDC work that focuses on practical problems that the public is asking about, like whether the plastic containers that people use and reuse are leaching EDCs. But she points out that this will be hard work; the FDA still claims BPA is safe, even though it banned its use in baby bottles and sippy cups. The official statement is: “The Food and Drug Administration’s assessment is that the scientific evidence at this time does not suggest that the very low levels of human exposure to BPA through the diet are unsafe.”

“Recent studies testing BPS and comparing it to BPA show that BPS is as bad, if not worse, than BPA as an EDC. ‘BPA free’ can give consumers a false sense of security about the product.” – Andrea Gore, PhD, professor and Vacek Chair of Pharmacology, University of Texas, Austin; editor-in-chief, Endocrinology

“I don’t know what studies they are reading,” Wayne says, “but the ones in peer-reviewed papers point to an entirely different conclusion. Until the FDA is convinced by the mass of data showing that BPA below their NOAL (no observed adverse effect level) has an impact on biological functions, the powerful chemical and manufacturing industries will not be motivated to make changes.”

However, she says the public can help by insisting on safe products, and federal agencies can help by stepping up and funding unbiased research. “There is a growing realization that we are poisoning ourselves with products that were designed to make our lives more convenient,” Wayne says. “And convenience is big business.”

– Bagley is the associate editor of Endocrine News. He wrote about the possible link between growth hormone and the risk of stroke in the July issue.

At a Glance
• Products that announce they are “BPA free” do not necessarily mean that they are EDC free.
• Studies are being conducted on BPS, a very similar analog to BPA, and researchers are finding that BPS has very similar effects as its more infamous cousin.
• More studies need to be done on BPS, and researchers have ideas on keeping harmful chemicals from getting into consumer products, but it will be a battle.