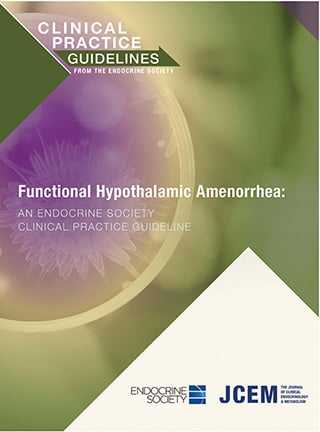 The Endocrine Society’s new clinical practice guideline on treating patients with functional hypothalamic amenorrhea highlights the need for a multidisciplinary approach to care. However, in some cases the patient must undertake certain lifestyle changes and that poses an entirely new set of challenges.

When a very thin and active young woman presents complaining that she has stopped menstruating, the temptation may be to reach for an easy answer — but the diagnosis and treatment may be somewhat complex, according to a new Endocrine Society guideline.

Exercising too much, eating too little, and being under too much stress can lead to metabolic and hormonal problems — including the hypothalamus releasing too little GnRH in the condition known as functional hypothalamic amenorrhea (FHA).

But FHA is a “diagnosis of exclusion” that requires clinicians to rule out other conditions that could be interrupting the menstrual cycle — and requires treatment by a multidisciplinary team — says Catherine Gordon, MD, MSc, who chaired the committee that wrote the evidence-based report, “Functional Hypothalamic Amenorrhea: An Endocrine Society Clinical Practice Guideline.”

“It may be that this young person is not consuming enough calories, she may be overexercising, or she might be stressed, but we first have to make sure there is not an anatomic or organic abnormality that is causing the amenorrhea,” Gordon says. Clinicians need to rule out pregnancy and conditions that can halt menstruation, including benign tumors in the pituitary gland and adrenal gland disorders.

If the diagnosis is FHA, the key to overcoming it is alleviating the underlying causes. “It is easier said than done to get a young woman to change her ways,” Gordon says, and requires a multidisciplinary approach including medical, dietary, and mental health support.

“There are a lot of myths around the menstrual cycle and FHA, and we are hoping this guideline will dispel some of them,” Gordon says. The first myth is that menstrual irregularity is common in adolescent girls. “There may be some irregularity during the first post-menarchal year, but thereafter, an adolescent should get into a regular cycle. If an adolescent’s or young woman’s periods have stopped or are only occurring every two or three months, that should be a red flag that something could be going on,” says Gordon, who is a professor of pediatrics at the University of Cincinnati College of Medicine.

“There is another misconception that FHA is seen only in extremely underweight, over-exercising young women. But FHA could also occur in a normal weight young woman who is stressed. She may have just gone off to college and be anxious about a new environment and her academic work,” Gordon says. Some patients are of a normal weight and eating what they think is enough, but exercising so much that they have energy imbalance. “She may look completely healthy and not have an eating disorder, but she can still have FHA,” Gordon says.

Too Much of a Good Thing

“There is a spectrum of FHA,” Gordon says. At one end of the spectrum, some patients may have full-blown eating disorders that are hard to overcome, but at the other end are women whose attempts to follow a healthy lifestyle have gone awry. “Some patients set out to ‘eat healthy.’ ‘I’m going to eat a low-fat diet. I’m not going to overeat. I’m going to get more exercise.’ It is a good intent, but it can turn into too much of a good thing. It is a slippery slope. It starts out as a healthy intention, but a patient can become obsessed. An example is an elite young ballet dancer, gymnast, or figure skater who needs to perform at a certain level and feels that she performs her best at a low weight. It confers an advantage to have a very lean build,” Gordon says.

“There are a lot of myths around the menstrual cycle and FHA, and we are hoping this guideline will dispel some of them. There may be some irregularity during the first post-menarchal year, but thereafter, an adolescent should get into a regular cycle. If an adolescent’s or young woman’s periods have stopped or are only occurring every two or three months, that should be a red flag that something could be going on.” – Catherine Gordon, MD, professor of pediatrics, University of Cincinnati College of Medicine, and chair of the guideline committee

“I think clinicians don’t know how to care for these patients; there is a lot of confusion as to what they should be doing,” Gordon says. “Some are prescribing oral contraceptive pills, even though that is not the appropriate maneuver. The therapy for these patients is to eliminate that energy deficit. But it can be really hard to break habits and to convince patients that they need to eat a thousand more calories each day. If they are very used to eating in a ‘healthy’ fashion and exercising every day, they don’t want to change. They can become kind of addicted to that lifestyle, so they are often very resistant to change. They often are in denial of the problem and say to their health providers, ‘I feel fine.’”

Because of this resistance to change, the guideline suggests a multidisciplinary approach to treatment, emphasizing the need for enlisting dietary and psychological support for the patient. Referring the patient to a nutritionist for dietary instructions can be an important part of their care. The guideline also recommends enlisting the help of a therapist. “We present some data showing that cognitive behavioral therapy can be helpful,” Gordon says.

“Eating disorders are a disease of denial. These patients don’t want to believe that anything is wrong with them,” Gordon says. Athletes and dancers can be on the milder end of the FHA spectrum, but overcoming denial can still be an important part of treatment. These patients are sometimes persuaded by the message that their amenorrhea is a sign that they should be concerned about, reflecting hormonal abnormalities that could affect them long-term, including adverse effects on bone density. Gordon warns athletes about bone health and the danger of stress fractures: “Sometimes that is a hook or a wake-up call for dancers and runners. They are really committed to their sport, and they don’t want to get injured.”

The Conundrum of Treating Bone

This bone density problem is important enough that it was the focus of a meta-analysis done in conjunction with the committee’s literature review. “We looked at skeletal agents that a clinician might prescribe to try to protect bone. There is a myth that giving young woman oral contraceptive pills is beneficial for their bones,” which the literature review disproved, Gordon says.

“There is another misconception that FHA is seen only in extremely underweight, over-exercising young women. But FHA could also occur in a normal weight young woman who is stressed. She may have just gone off to college and be anxious about a new environment and her academic work. She may look completely healthy and not have an eating disorder, but she can still have FHA.” – Catherine Gordon, MD, professor of pediatrics, University of Cincinnati College of Medicine, and chair of the guideline committee

“If you are unable to get patients to change their eating, stop over-exercising, or alleviate their stress, despite your multidisciplinary team, short-term transdermal estrogen therapy could be beneficial for the patient with longstanding amenorrhea,” Gordon explains. “Transdermal estrogen is metabolized differently than an oral contraceptive pill and other forms of oral estrogen. It is safer, less likely to be associated with an increase in clotting risk, and more bioavailable to bone. But I want to underscore that its use should be short-term.”

“The other agents we looked at are bisphosphonates, which are prescribed commonly for postmenopausal osteoporosis. For adolescents and young women, there is not enough evidence to support their use, and in fact, they may have some detrimental side effects,” Gordon says. “Bisphosphonates have a very long half-life and become intercalated into the skeleton. If the patient later becomes pregnant, pregnancy is a known high bone turnover state. The bisphosphonate could be released, and theoretically affect the fetal skeleton. So that is the major concern in women of reproductive age.”

The guideline “will be helpful” in raising awareness of FHA, says Robert W. Rebar, MD, chair of the department of obstetrics and gynecology at the Western Michigan University Homer Stryker M.D. School of Medicine: “The general obstetrician-gynecologist and the general internists don’t always think of FHA, so the guideline will be important in alerting clinicians to be cognizant of the condition.”

Rebar, who reviewed the guideline before it was released but was not on the committee that created it, said the most valuable part could be the literature review. “They did a great job of surveying the literature, and a detailed job of summarizing it,” Rebar says. “This is a long and complex guideline that goes into lots of detail.”

Cosponsored by the American Society for Reproductive Medicine, European Society of Endocrinology, and Pediatric Endocrine Society, the guideline was published in the May issue of The Journal of Clinical Endocrinology & Metabolism and is available online .

– Seaborg is a freelance writer based in Charlottesville, Va. He wrote about the increase in hip fractures in the May issue.