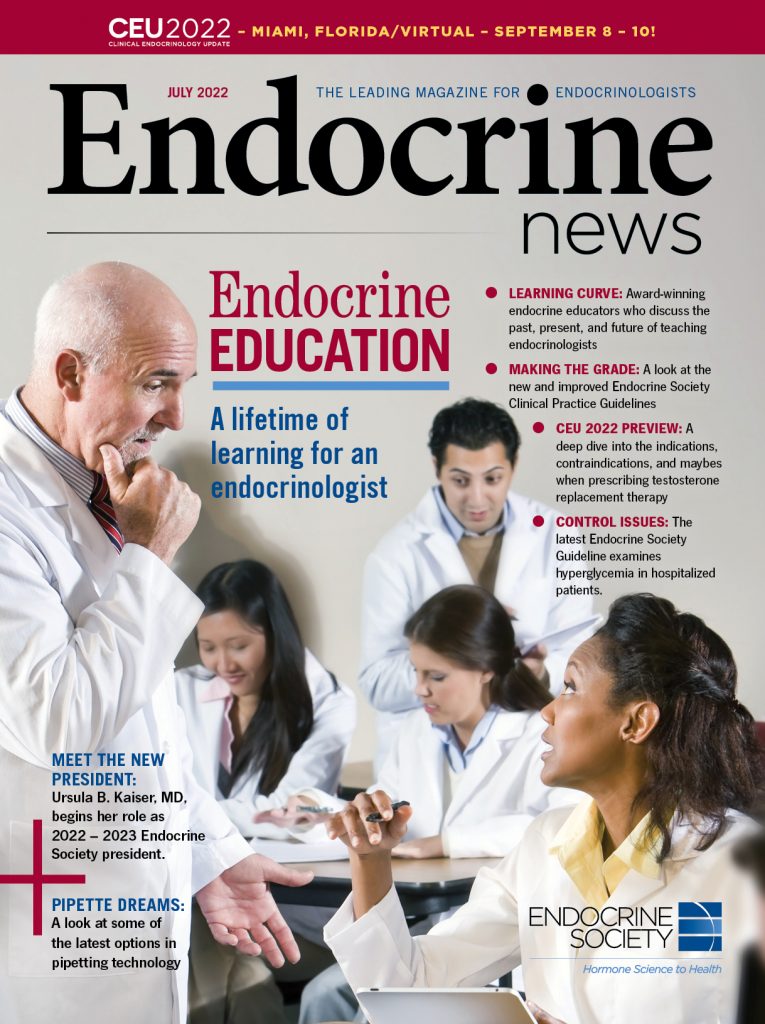 The Endocrine Society’s Clinical Practice Guidelines are among the most trusted recommendations in the field of endocrinology and are relied upon by thousands of clinicians each year. However, new standards utilizing the GRADE methodology prioritize evidence over expert opinions, minimize conflicts of interest, and, for the first time ever, engage a wider number of stakeholders, including patients.

As one of its many trusted and important endeavors, the Endocrine Society publishes clinical practice guidelines (CPGs) — much appreciated and heavily relied on by clinicians and their patients — that synthesize the available evidence on a given clinical problem and help guide the approach to most optimally treating it in various situations and accounting for various patient-important factors. Especially when a clinical question does not have a clear answer, busy clinicians do not have time to navigate the copious information out there to identify the best way forward with an individual patient.

Instead, they can turn to the findings from a panel of experts who have come together to review related studies carefully and thoroughly and then provide direction for the most important unanswered clinical questions related to a given disorder. CPGs improve patient care.

As with anything, however, for CPGs to work as intended, they need a system of quality control. Historically, guideline development in general was not necessarily very transparent. In the early 2000s, an international group of methodologists and epidemiologists recognized this lack of transparency and resulting lack of standardization and collaborated on finding a solution. That solution was the GRADE methodology: Grading of Recommendations, Assessment, Development, and Evaluation.

Says corresponding author Christopher R. McCartney, MD, professor of endocrinology, endocrinology, and metabolism, at the University of Virginia School of Medicine in Charlottesville, “we timed the article to coincide with the publication of the new guideline largely because readers are going to see some differences. We thought it would be important to communicate those changes and to explain their rationale.”

• With publication of “Endocrine Society Guideline Trustworthiness,” in JCEM this month, Endocrine Society CPGs will more faithfully adhere to guideline creation standards set forth by the National Academy of Medicine and to the GRADE methodology.

• New CPGs will prioritize evidence over expert opinion, explicitly justify recommendations on that basis of numerous factors, minimize conflicts of interest, and better engage all stakeholders, including patients.

• The first Endocrine Society CPG to have undergone the new process is “Management of Hyperglycemia in Hospitalized Patients in Non-Critical Care Setting,” published this month in JCEM.

The new and future CPGs will reflect important differences in four key areas: systematic evidence review, conflict of interest avoidance, decision making transparency, and patient engagement. Coauthor M. Hassan Murad, MD, methodologist at the Mayo Evidence-based Practice Center in Rochester, Minn., and member of the GRADE Working Group, explains: “One major change in this new process is that every question is underpinned by a systematic review. An independent team has created this transparent and reproducible process to select the studies, so the studies are not cherrypicked. Another is that the conflict-of-interest policy is now very explicit and transparent, and most people on the guideline panels do not have ties with industry or with certain products. A third is that the process of reaching a decision is much more transparent and follows the GRADE framework insofar as quantifying all factors, including benefits and harms. Finally, the engagement of patients and caregivers in the decision-making process is critical.”

These enhancements are hallmarks of a high-quality, trustworthy guideline, but they do come with potential tradeoffs, says McCartney, who became a member of the Clinical Guidelines Committee in 2016 and chaired it from 2018 to 2021. For example, rigorous methodology versus comprehensiveness: many of the Society’s previous CPGs included high numbers of recommendations for many facets of a particular problem, presenting a comprehensive view of the issue. But performing transparent, rigorous systematic reviews on such high numbers of clinical questions is not feasible, so the number of clinical questions addressed is now necessarily restricted. “What that means is that our guidelines will generally have fewer recommendations than the readership may be used to. What we charge our panels to do is to prioritize and address the most important areas where people need guidance,” he says.

The avoidance of conflicts of interest also presents a trade-off insofar as many well-known experts have relationships with industry (e.g., acting as consultants, conducting industry-funded research, serving on advisory boards, etc.), but such relationships increase the risk for bias or, at the very least, may present an appearance of bias. “There may be a number of very well-known experts who weren’t selected for a guideline panel in part because of our trying to minimize conflicts of interest. Broadly speaking our approach has been to achieve credibility and trustworthiness not so much on having the most well-recognized experts but instead on the basis of our methodological rigor,” McCartney says.

“One major change in this new process is that every question is underpinned by a systematic review. An independent team has created this transparent and reproducible process to select the studies, so the studies are not cherrypicked.”

Another difference readers will notice relates to how evidence is presented. New and future CPGs will prioritize presenting the composite evidence rather than individual studies. “Prior guidelines would read almost like a review,” explains McCartney. “But we’ve really stressed that panels should present high-level descriptions of the evidence and focus on the best estimates for the effects of a given intervention, in addition to how confident the panel is about those estimates.” (It should be noted that information from the individual studies will be available in the systematic reviews, so this is less of a trade-off than a best-of-both-worlds approach.)

Putting It to the Test

Making the move toward depending on evidence over expert opinion by implementing GRADE assures that CPGs are consistent with standards set by the Institute of Medicine (now the National Academy of Medicine), explains Murad, who has worked on Endocrine Society CPGs for 15 years, including the aforementioned “Management of Hyperglycemia in Hospitalized Patients in Non-Critical Care Setting.” “This endeavor by the Endocrine Society is futuristic; they are leading the charge,” he says.

Executing such a sea change in faithful implementation of GRADE required keeping track of a lot of moving parts, according to McCartney: “This was a broad Societal effort, involving the governance of the Society, the Clinical Guideline Committee members, and all the panel members on the hyperglycemia and other soon-to-be-published guidelines.” Coauthor Marie E. McDonnell, MD, of Brigham and Women’s Hospital, in Boston, Mass., and current chair of the Clinical Guidelines Committee, was involved from the beginning. “I was part of the committee at that time discussing using different approaches, and GRADE certainly stood out as the premier approach to guideline development. It takes into account formal evidence synthesis and how clinicians make decisions about choosing a therapy and puts them together in an organized framework for the members of a guideline development panel,” she says.

McDonnell explains that prior guidelines not having had as intensive meta-analysis as will happen going forward is not ideal but is not what prompted the CPG overhaul. “The main driver was really the National Institute of Health, the Agency for Healthcare Research and Quality, and other organizations saying every guideline should be faithfully adhering to GRADE to ensure that it is trustworthy.” The committee also had an inside track to understanding GRADE in the Mayo Clinic methodology group led by Murad. “He has been a proponent of GRADE and understood it on such a deep level that transitioning to full-GRADE compliance was not as difficult for us as it might have been otherwise,” McDonnell says.

McDonnell, as current Clinical Guidelines Committee chair, has the distinction of not only holding that position during the release of the first GRADE-vetted guidelines put out by the Endocrine Society but also as one of the subject matter experts on the guideline itself. “It’s hard to learn a new methodology, especially when you’re learning and teaching at the same time. That tension was minimized by the expertise of [Murad] and also [McCartney], who had formal GRADE training at that point,” she says. “There was still a tendency for the experts to want to elucidate all of the reasons why we might choose one approach or another, but, in the end, evidence had to drive every single sentence in that guideline, and if it didn’t, we couldn’t write it.”

McDonnell says they also had to learn a new vocabulary as part of applying the GRADE methodology, such as the “evidence to decision [ETD]” framework. They have not only gotten the hang of the new approach, lingo and all, but they also figured out some ways to make future implementations more streamlined. “Mary Korytkowski and Ranganath Muniyappa, chair and co-chair, respectively, of the inpatient hyperglycemia guideline, were really instrumental in giving us feedback relating to communication, assigning roles, making sure people don’t overlap tasks, and what to expect from the different players—the GRADE methodologists and the Endocrine Society staff.” McDonnell credits McCartney with ensuring that methodologist were also endocrinologists to bring efficiency to the process.

It’s straight As for this team and for “Endocrine Society Guideline Trustworthiness” in successfully providing guidance for guideline panels to more faithfully implement all the new policy changes and the components of GRADE. “We’re able to show our work in a way now that we weren’t able to before, and that speaks to the transparency of the process, which we think is really important,” McCartney says. “GRADE is probably the most widely accepted standard for guideline development, and the GRADE Working Group continues to refine that methodology.”

“We’re able to show our work in a way now that we weren’t able to before, and that speaks to the transparency of the process, which we think is really important. GRADE is probably the most widely accepted standard for guideline development, and the GRADE Working Group continues to refine that methodology.”

The team has much to celebrate and be proud of. They have created a system that will help clinicians help patients. They worked very hard to do so. “I’m excited for it to get out there,” McCartney says. “Pulling this paper together caused me to reflect on how much work has gone into this on the part of a lot of people. I think we can all be proud of the progress we’ve made.”

Horvath is a freelance writer based in Baltimore, Md., and a frequent contributor to Endocrine News. In the June issue, she wrote about six separate obesity studies from Endocrine Society journals in two separate features, “Tipping the Scales: Noninvasive Obesity Breakthroughs” and “Middle Management: Evaluating New Insights to Obesity and Weight Control Options.”