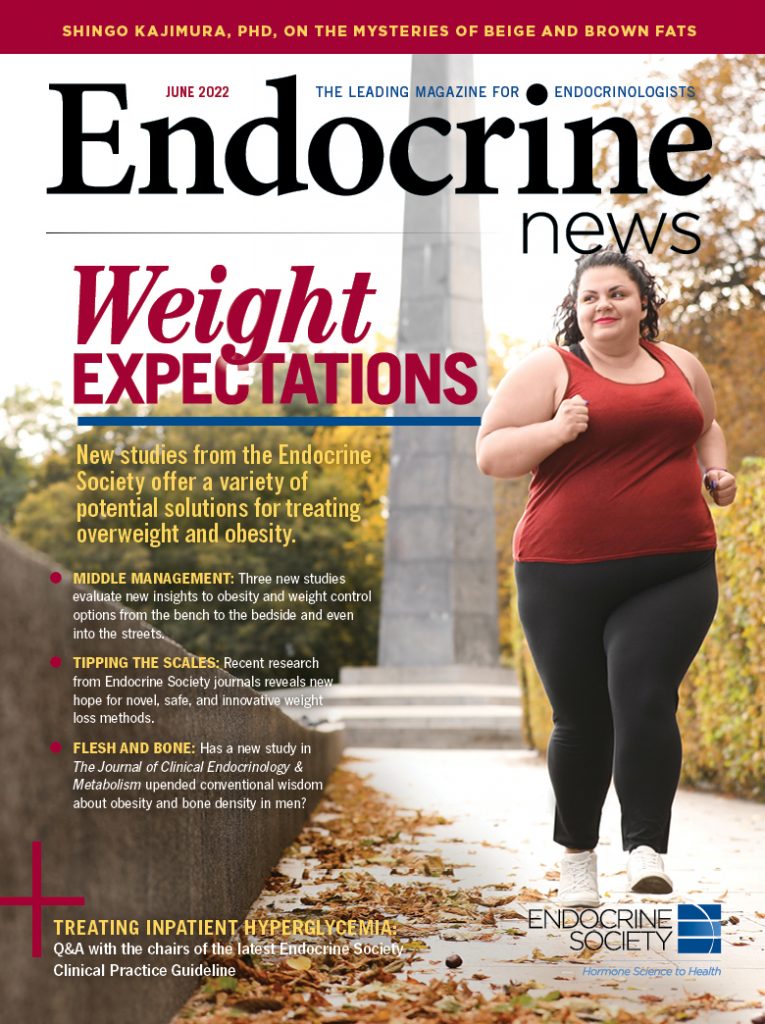 As obesity continues to reach epidemic proportions, endocrine researchers are at the forefront of discovering new methods to help clinicians and patients alike to manage and even conquer obesity and its plethora of comorbidities. Here, we look at three recent studies that take these solutions from the bench to the bedside and even to the sidewalks.

Obesity and its sequelae continue to jeopardize patients’ health and keep our healthcare system in a tailspin. But researchers are doing their utmost to bring new insights into this complex disease to help clinicians and patients better manage obesity and its comorbidities and maybe even prevent them.

In addition, as dedicated as researchers and clinicians have been in battling this public health epidemic, some help from policymakers and stakeholders outside the medical sphere would bring us much closer to winning this war.

• A U.S. study from Johns Hopkins Bloomberg School of Public Health showed that patients with type 1 diabetes now have rates of obesity similar to that of the general population, magnifying their risk for renal disease and highlighting the need for screening and prevention in these patients.

• In a study from Nanjing University in China, genetic evidence showed that higher BMI levels were causally associated with increased risk of diabetic nephropathy (DN) and decreased eGFR levels, and this increase in BMI had a greater impact on DN risk in women.

• A study from the University of Toronto in Canada explored the research on the relationship between the built environment and metabolic health, concluding that living in an environment that facilitates physical activity reduces risk of obesity and diabetes and building more such environments could greatly improve population health.

In “Obesity and Chronic Kidney Disease in U.S. Adults With Type 1 and Type 2 Diabetes Mellitus,” published in the May issue of The Journal of Clinical Endocrinology & Metabolism (JCEM), Elizabeth Selvin, PhD, MPH, of the Johns Hopkins Bloomberg School of Public Health in Baltimore, Md., and team take a look at how renal function is affected in patients with obesity and type 1diabetes.

The link between obesity, diabetes mellitus type 2, and chronic kidney disease (CKD) is well characterized, but that association in the setting of type 1 diabetes has not been fully investigated, leading the team to try to fill that gap. In addition, despite improvements in treatment, people with type 1 diabetes have a life expectancy 12 years lower than the general population, which studies suggest is due to chronic diseases, including CKD. Even so, the kidney function of patients with diabetes of either type is undertested, despite guidelines recommending testing annually.

For their study, Selvin and team compared how the association of obesity, type 1 diabetes, and CKD in a cohort of 4,060 patients measured up against a cohort of 135,458 patients with obesity, type 2 diabetes, and CKD, using data from patients for both cohorts ages 18 years old and older receiving primary care from the Geisinger Health System serving central and northeastern Pennsylvania between January 1, 2004, and December 31, 2018. Data from 47,611 patients without diabetes taken from the 1999–2018 National Health and Nutrition Examination Survey (NHANES) served as a control. Outcome measurements were obtained from routine clinical care and included body mass index (BMI) and estimated glomerular filtration rate (eGFR). Obesity = mean BMI ≥30 kg/m2, and low eGFR = mean eGFR <60 mL/min/1.73 m2.

“Previous epidemiological studies have suggested that obesity is associated with an increased risk of [diabetic nephropathy], but some studies have also suggested that higher BMI is a protective factor for renal function deterioration in patients with type 2 diabetes. Identification of potentially modifiable pathogenic factors is essential for the prevention and treatment of [diabetic nephropathy.”

“Obesity in type 1 diabetes is turning out to be just as big of a problem as in the general population,” Selvin says, despite the historical presumption that these patients have lower rates of obesity. In fact, rates are trending upward, rising from a 32.6% prevalence in 2004 to 36.8% in 2018. (Rates of obesity in type 2 diabetes remained troublingly high throughout the study period: 58.1% prevalence in 2004 to 61.6% in 2018.)

“Our results highlight the need for interventions to prevent weight gain and end-stage kidney disease in people with type 1 diabetes,” Selvin concludes. Such interventions include regular screening and renal testing.

In a related study, a team led by Zhi-Hong Liu, MD, of Jinling Hospital and Nanjing University School of Medicine in Nanjing, China, zeroed in on the link between obesity and diabetic nephropathy (DN) in type 2 diabetes to clarify mechanisms and causality. “Previous epidemiological studies have suggested that obesity is associated with an increased risk of DN, but some studies have also suggested that higher BMI is a protective factor for renal function deterioration in patients with type 2 diabetes,” Liu says. “Identification of potentially modifiable pathogenic factors is essential for the prevention and treatment of DN.”

“Body Mass Index and Risk of Diabetic Nephropathy: A Mendelian Randomization Study,” published in the February issue of JCEM, reports how Mendelian randomization (MR) can facilitate this identification and evaluates the causal effect of BMI on DN and kidney traits. The 56 BMI-associated genetic variants used in the study came from the BioBank Japan discovery genome-wide association studies analyses; their effects on DN risk, eGFR, and proteinuria were estimated in 3,972 patients with type 2 diabetes, and then sex-stratified MR analysis was performed between BMI and DN.

To back up a bit to what prompted the researchers to explore these particular associations, Liu says, “[studies show] obesity was related to chronic inflammation and may activate the inflammatory cascade response, which, in turn, leads to insulin resistance. This may be a pathway that higher BMI increases risk of DN.” Moreover, he continues, “gender differences in sex hormone levels and fat distribution result in higher estrogen levels and fat deposit in the kidney for women with the same BMI, which affect renal hemodynamics and intrarenal regulation, thus possibly leading to a higher risk of DN in women.”

“Kidney disease is often considered a bigger problem in type 2 diabetes. But our study shows that adults with type 1 diabetes actually have a higher risk of kidney disease.”

Their results showed that one standard deviation increase in BMI was causally associated with higher DN risk and lower eGFR level (but not with proteinuria), an effect stronger in women than in men. The team plans to study this causal association between BMI and DN more deeply in the future as well as the dynamic causal association between BMI and DN.

In “The Weight of Place: Built Environment Correlates of Obesity and Diabetes,” published in the February issue of Endocrine Reviews, Gillian L. Booth, MD, MSc, of the University of Toronto, St. Michael’s Hospital of Unity Health Toronto and ICES in Ontario, Canada, and team show that people who live in walkable neighborhoods with access to parks and other outdoor activities are more active and less likely to have diabetes or obesity.

“We got interested in this area because of the large increase in obesity and diabetes over the last few decades, and so researchers and policymakers have been struggling to find out what we can do about it at a population level,” Booth says. While genetics and biologic factors play enormous roles in increasing rates of obesity, so too might manmade environmental factors that make driving from place to place more desirable than walking, such as improvements in road infrastructure and zoning policies that increase distance between locations.

“So, we’ve been looking at how neighborhoods can be designed to help promote activity on a broader level,” Booth says.

They scoured the available literature and synthesized their findings to make some conclusions about the benefits of living in a walkable neighborhood. It will surprise no one that the benefits are vast, including reducing rates of obesity, diabetes, and hypertension and other cardiovascular diseases, but the real impact of their research is how they have enumerated the ways we can act on it to improve population health.

“One way is transit expansion,” Booth says, “because you can actually increase what we call ‘active transportation’ by being able to walk or cycle to a transit hub and not be dependent on cars, which is a win-win because this will also decrease emissions and align with other policies.” Another potential way is to build mixed-income neighborhoods, so that poor neighborhoods are not subject to food deserts, while affluent neighborhoods have access to a variety of healthy food options. A third is creating “complete streets,” a transportation policy and design approach that allows for multiple modes of transportation — cycling, walking, and so on — to exist alongside driving and public transit to facilitate the active transportation Booth describes. “Cities like Barcelona and Copenhagen are looking at innovative ways to create corridors for pedestrian activities or cycling,” she explains. So-called “greening interventions” are yet another way to both encourage moderate to vigorous activity and reduce pollution by expanding parks and other green spaces.

“We might say, ‘walk 30 minutes five times a week,’ but we don’t always think about the context in which people live, which is crucial to actually getting them to make behavior changes and to maintain them. Understanding the barriers that people face and the sort of changes that they can make in terms of, for example, their transportation mode would be more effective.”

Even this look at how policy can help improve population health has implications inside the clinic. Although clinicians are certainly aware of the importance of being physically active as a cornerstone of weight-loss strategies and diabetes prevention, just giving that advice is not always adequate. “We might say, ‘walk 30 minutes five times a week,’ but we don’t always think about the context in which people live, which is crucial to actually getting them to make behavior changes and to maintain them,” Booth says. “Understanding the barriers that people face and the sort of changes that they can make in terms of, for example, their transportation mode would be more effective.”

Booth says clinicians can suggest that their patients park their cars farther away from their destination point or getting there by transit. “Think about how you can incorporate those little adjustments and find those opportunities for physical activity in daily life. Understanding that is key,” she adds.

And, if you build it, they will come.

Horvath is a freelance writer based in Baltimore, Md. In the February issue, she wrote about the diabetes risk of gender-affirming hormone therapy in transgender women.