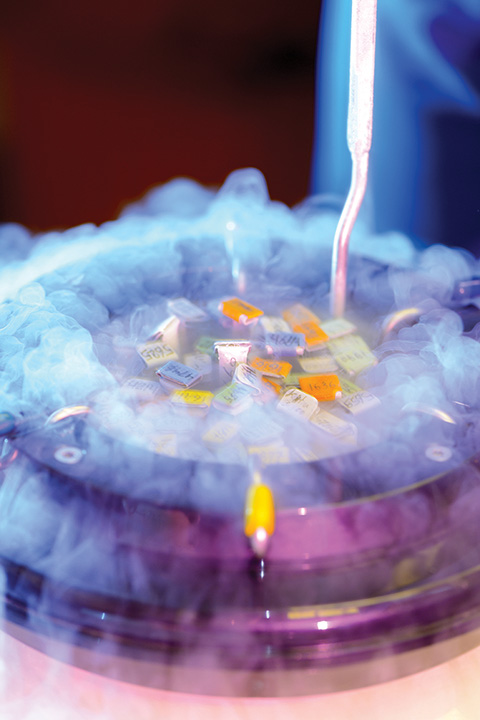 Although it sounds like a plot from a sudsy melodrama, more and more people who were conceived via sperm donation are discovering their half siblings … sometimes dozens of them! The Food & Drug Administration only regulates screening and testing donors for diseases, but many feel there needs to be more rules governing the use of these donations.

Her son was in preschool when he first asked about his father. He had more questions when he was six. When Wendy Kramer made the trip to the sperm bank in 1990 with her then-husband, she didn’t realize answering her son’s future questions would be so difficult.

“He was saying to me, ‘I want to know who my biological father is,’ and I’m thinking, well, of course you do,” Kramer recalls.

Kramer later learned from the sperm bank that her son had half siblings from “donor 1050” and her son was anxious to meet them. So in 2000 Kramer started her search in a Yahoo group that soon grew into The Donor Sibling Registry after her story received national media attention, including an appearance on Oprah in 2002. Kramer was contacted right after the show aired by a mother who birthed two daughters with sperm from her same donor. And just like that her son suddenly had two half-sisters.

The Donor Sibling Registry now boasts nearly 53,500 members, including donors, parents, and donor-conceived people. But Kramer intends to do more than make matches between donors and offspring. She wants the Food and Drug Administration, the governing body in these matters, to institute more regulation in the sperm bank industry.

No one knows for sure how many individuals and couples seek sperm donation in the U.S. each year. The CDC’s National Health Statistics reports that artificial insemination was used by about 714,000 women (1.7% of women aged 25–44) between 2006 and 2010. What is certain, is that an increasing demographic for sperm bank customers are single women and lesbian couples who pay anywhere from $450 to $1,000 for each vial of sperm used for artificial insemination. The industry is booming and debates on how it should be regulated have increased.

Sperm banks are only required to adhere to FDA regulations for the screening and testing of reproductive tissue donors: donors’ medical records should be screened for evidence of communicable diseases and donors should be tested for infectious diseases, such as HIV, hepatitis B and C, and other STDs.

In their 2012 Committee Opinion “Recommendations for gamete and embryo donation,” the American Society for Reproductive Medicine (ASRM) goes further and recommends a detailed medical history, complete physical examination, testing for STDs and some genetic diseases, and psychological counseling of the sperm recipients.

“Our member physicians follow our guidelines and if they are working with patients to acquire sperm from a bank, they want to see evidence in the facilities’ records that they also adhere to our guidelines,” says Eleanor Nicoll, public affairs manager at ASRM.

“Proponents of the status quo in the U.S. have argued that eliminating anonymity would decrease the amount of donation,” Klitzman adds. “However, following the establishment of non-anonymity in the UK did not, in the end, decrease the number of donors.” – Robert Klitzman, MD, fertility doctor and bioethicist, Columbia University, New York, N.Y.

Most patients considering sperm donation ask reproductive endocrinologist Marguerite K. Shepard, MD, about picking a known donor, either a friend or a relative, and it’s something Shepard discourages. She counsels them to use a bank instead.

“State law requires that even volunteer known donors are required to go through the same STD testing, freezing, six-month quarantine, and repeat STD testing as bank donors,” says Shepard, professor Emerita in the Department of Obstetrics and Gynecology at Indiana University School of Medicine.

“The cost can get astronomical compared to the banked specimens because there is an economy of scale with the banks,” she explains. “Banked specimens are carefully vetted with appropriate safeguards for disclosure.”

A few attention-grabbing lawsuits and news stories have revealed the problems with limited regulations in the sperm donation industry.

Georgia-based Xytex Sperm Bank was sued in 2015 when a couple learned the donor of their daughter did not have multiple college degrees and an IQ of 160 as advertised by the bank. In fact, he was a college dropout with a diagnosis of schizophrenia, which the couple said gave their child a 10% chance of inheriting the disorder. The donor had reportedly at least 36 conceived offspring. Xytex argued that the couple knew the health information “was reported by the donor and were not verified by Xytex.” The case was later dismissed but Xytex faces similar lawsuits in Canada from other families who have children from the same donor. Should the bank be held accountable?

And there was the 2011 New York Times article where a mother revealed that her son’s donor had fathered 150 children. Both recipients and donors started asking why there was no cap on the number of children who can be fathered by one donor?

Although countries such as Britain, Sweden, and France have legal limits on how many children one donor can father, there is no such law in the U.S. The ASRM recommends restricting the number to 25. According to information on Fairfax Cryobank website, it does cease a donor’s sales when 25 families have been reported in the U.S. The bank, however, depends on its customers to keep its records accurate and asks customers to “be diligent in reporting births” on its pregnancy reporting page.

“My donor donated three times a week for five years,” Kramer says. “It makes it very hard for banks to keep track of medical issues or of how many half-siblings are out there. And also for donors wondering how many kids they have.”
“So it’s very problematic because in our research we found that about a quarter of donors donate to more than one sperm bank,” Kramer says. “And, one sperm donation can be broken out into anywhere between six and 24 sellable vials of sperm.”

Do Donors Have a Right to Anonymity?

Sperm donations in the U.S. can be anonymous or directed (non-anonymous or known), but most are anonymous. Many clinics make the identity of the sperm donor available to a donor-conceived child at age 18 as part of “open identification,” but customers have to choose to use them so they can be effective.

Many donors’ offspring are claiming their right to know their biological donor.
“I think that offspring who are produced as a result of sperm donation have a right to know who the donor is, if they wish, and that this knowledge can be in their best interests,” says Robert Klitzman, MD, a fertility doctor and bioethicist at Columbia University in New York City.

“Proponents of the status quo in the U.S. have argued that eliminating anonymity would decrease the amount of donation,” Klitzman adds. “However, following the establishment of non-anonymity in the UK did not, in the end, decrease the number of donors.”

Rules on anonymity for sperm donors in the UK were changed in 2005 to allow any child born after that time to find their biological father at age 18. Over the past years, a growing number of countries have followed suit.

For its part, the ASRM believes that “disclosure to the child of the fact of donor conception and characteristics of the donor may serve the best interests of the offspring.”

“Anonymity is all an illusion anyway,” says Kramer. “With DNA testing, people are finding out that they are donor-conceived on a regular basis. My own son, just met two half-sisters two weeks ago. They didn’t know they were donor-conceived. One of them swabbed her cheek and put it into 23andMe (a DNA genetic testing site), and came back having a half-brother, and she’s like, ‘how can we have a half-brother?’”

Ryan is now 26 years old and has matched with 10 half-siblings. He’s personally met six of them.

To date, Donor-Sibling Registry has helped connect more than 14,170 half-siblings and/or donors with each other.

—Glenda Fauntleroy is a Carmel, IN-based freelance writer and a regular contributor to Endocrine News. She wrote about gender disparities in the lab in last month’s Laboratory Notes column.