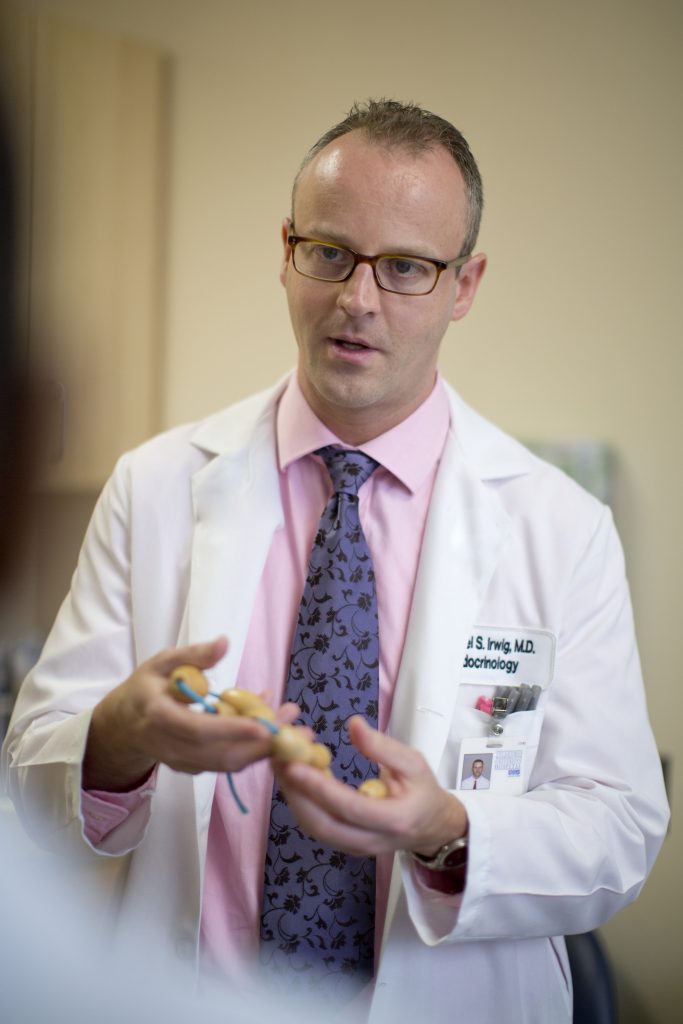 It is true… the names of my two cats are Andro and Gen. The effects of androgens on the brain as they relate to gender differences was one of the major reasons that led me to become fascinated with the field of endocrinology. Other reasons that led me to choose endocrinology as a career were the interesting patients I was exposed to as a resident at the University of Virginia, the vast variety of conditions and organs involved in the field, possibilities for research, the intellectual stimulation of making and managing complex diagnoses, and a preference for outpatient medicine.

I migrated from Charlottesville, Va., to Seattle to pursue my endocrine training at the University of Washington (UW). My initial “big decision” was to choose between basic and clinical research. Having already been involved in clinical research on nutrition in adolescents in Costa Rica as a medical student, I wanted to explore the world of basic science which was unknown to me as a Spanish major at Vanderbilt University. I spent a year in a physiology laboratory at UW working with postdocs and PhD students looking at the effects of kisspeptin in male rats. After experiencing both types of research, I realized that my true calling in medicine was what had led me to medicine in the first place — patient care. I also envisioned myself as clinician educator, wanting to give back to the field by contributing to the education of future generations of physicians and endocrinologists. As a fellow, I began to practice my teaching skills by volunteering to speak on male hypogonadism and other similar topics at local community hospitals.

I feel very lucky to have found such a good match with both the field of endocrinology and my colleagues …  doing something that you really like makes going to work more of a privilege rather than a chore.

My first “real job” took me back to the East Coast to Sinai Hospital of Baltimore, a large community hospital with an internal medicine residency program. In addition to the teaching opportunities, I choose Sinai Hospital because of the amazing colleagues I would have including David Cooper and Sally Pinkstaff. They provided invaluable mentorship and remain close friends despite my move to Washington, D.C., in 2007 (In fact, David and I just recently visited the 122nd floor of the Burj Khalifa skyscraper in Dubai during a break at the Emirati Diabetes & Endocrine Congress.)

My second job at George Washington University in Washington, D.C., has been a great mix of patient care but also teaching and clinical research. I consider myself a general endocrinologist with a particular interest in androgens. The controversies regarding when to prescribe testosterone for male hypogonadism has provided a fun and rewarding niche for clinical care, teaching, and research. I credit my time at UW for providing me with the skill set needed to critically analyze research studies. Teaching and directing the two-week endocrine module for the second-year medical students at GW has also been very fruitful.

Over the last few years I have adopted transgender medicine as a major focus. Making a meaningful difference in the lives of the one of the most marginalized populations has been a humbling experience. Witnessing first-hand the tremendous changes in society regarding this community been tremendous. I love giving talks on transgender care as the audience is often highly engaged and interested in the topic. Of note, I thank Dr. Vin Tangpricha of Emory University for opening many doors for me in this arena.

In addition to endocrinology as a career, the field has opened the door to several friendships and collaborations from one continent of the world to another. Some of the connections were formed through working with others on committees and task forces of the Endocrine Society and AACE. Other connections were simply made by simply searching the membership directories of the Endocrine Society and AACE. For example, during a recent a trip to Oman following the congress in Dubai, I met with Dr. Abdullah Al-Futaisi who introduced me to his colleagues at Sultan Qaboos University in Muscat, Oman. Similarly, a few years ago I had the pleasure of meeting Dr. Alvaro Fortich in Cartagena, Colombia and Dr. Luz Angela Casas Figueroa and her associates in Armenia, Colombia.

For the reasons above, I feel very lucky to have found such a good match with both the field of endocrinology and my colleagues. Despite some of the challenges of practicing medicine in the U.S. healthcare system, doing something that you really like makes going to work more of a privilege rather than a chore.