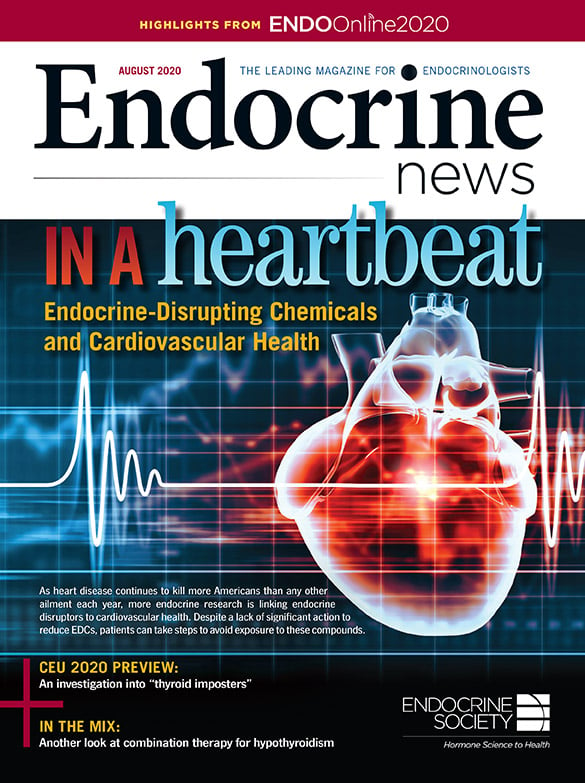 As heart disease continues to kill more people than any other ailment annually, more endocrine research is linking endocrine disruptors to cardiovascular health. Patients can reduce their own exposure to these compounds.

Cardiovascular disease (CVD) is the leading cause of mortality in the U.S., responsible for a quarter of all deaths, with someone succumbing to CVD every 37 seconds.

The causes are wildly varied and mostly well known; processed, high fat diets and a sedentary lifestyle are the most infamous culprits, but research is increasingly finding associations between cardiovascular disease and a relatively new player on the scene – endocrine-disrupting chemicals (EDCs), even at low doses and even “safe” chemicals meant to replace the ones proven to cause harm.

The best way to treat CVD remains preventing the disease from developing in the first place by eating a healthy diet and leading an active lifestyle, but EDCs are so ubiquitous and still so poorly understood, that that ounce of prevention can feel like it weighs a ton.

Or bisphenol S (BPS) and bisphenol F (BPF), two chemicals meant to substitute for bisphenol A (BPA), after the U.S. Food and Drug Administration banned the use of BPA in baby bottles and formula packaging in 2012. Products that use BPS or BPF are able to display cute stickers that proclaim that product is “BPA free” (and therefore safe). New research has linked these two chemicals to hypertension.

Here we’ll look at two new studies and what they mean for our understanding of these EDCs.

According to the new guidelines put out by the American Heart Association, almost half of the people in the U.S. have hypertension. And again, there are many reasons and causes for this staggering number, but Puliyur S. MohanKumar, BVSc, PhD, and his team at the University of Georgia say that the effects of emerging contaminants are overlooked and understudied. BPA is already associated with high blood pressure, but its analogs BPS and BPF haven’t been investigated as much, so it’s worth finding out whether a similar association exists.

“BPA has been banned and there are compounds that are alternatives for BPA and we started looking at whether anyone has investigated the effects of all the endocrine-disrupting effects of BPS and BPF, which are supposed to be alternatives to BPA,” MohanKumar says.

MohanKumar explains that no one had studied whether BPS or BPF affects cardiovascular function, even though BPA has been implicated in as much. And “BPA free” does not mean “EDC free.”

Meanwhile, in Shanghai, researchers have been looking at what effects the seemingly omnipresent phthalates have on cardiovascular health. Phthalates have been found to increase CVD risk factors such as obesity and diabetes. However, as Yingli Lu, MD, PhD, chief of the Department of Endocrinology and Metabolism at Shanghai Ninth People’s Hospital tells Endocrine News, few studies have investigated the association between phthalate exposure and CVD in type 2 diabetes. “Currently, phthalates are widespread in our daily life,” Lu says. “Phthalates have been found to deteriorate cardiometabolic risk factors such as obesity and diabetes. We aim to evaluate the associations of urinary concentrations of phthalate metabolites with CVD and vascular measurements in diabetic patients and explore whether CVD risk factors mediate or interact with these associations.”

“We Were Not Surprised at All”

Lu and her team recruited study participants from the outpatient clinics of seven communities in Huangpu District and Pudong District in Shanghai. Using a simple random sampling method, they invited half of the patients with type 2 diabetes from the registration platform in each community healthcare clinic. The participants were 18 or older and had lived in their current area for longer than six months. A total of 675 participants were involved in the final analyses.

The researchers measured 10 metabolites of phthalate exposure in participants’ urine and found an association between two of the metabolites – monoethyl phthalate (MEP) and monoisobutyl phthalate (MiBP) – and CVD. Interestingly, CVD risk parameters, including obesity indices, insulin resistance, blood pressure, LDL and HbA1c, did not mediate the relationship between exposure to phthalates and CVD. “Our results identified that the relationship between phthalates and CVD was mediated by none of the cardiometabolic risk factors tested, which included HbA1c, BMI, waist circumference, lipid profile and blood pressure,” Lu says. “We could say [exposure to] phthalates is probably or may be an independent risk factor. A definite conclusion should be further supported by future larger prospective studies.”

For MohanKumar and his team, their work involved exposing pregnant rats to low levels of saline, BPA, BPS, or BPF and then following the rats’ offspring, which were implanted with devices to measure their blood pressure. The readings are automatically recorded, so it reduces the variability of the animals’ constant changes in blood pressure.

The researchers measured blood pressure once a week for 11 weeks over a 24-hour period. They found that both the systolic and diastolic blood pressure were significantly increased in animals exposed to BPA, BPS, and BPF, compared with those exposed to saline.

“I have to be honest with you,” MohanKumar says. “We were not surprised at all.”

However, MohanKumar is careful here to remind that correlation does not equal causation, and that the next step would be a mechanistic study. “I would say that it is a caveat, so people can understand that it’s more of a correlative study than a causative study and we need to come up with a mechanism,” he says.

From 2014 to 2015, cardiovascular disease cost the U.S. $219 billion each year. For a patient with type 2 diabetes, developing CVD can be devastating, not only physically but financially as well. Lu says that studies have shown no benefit from intensive glucose-lowering therapy on the prevention of CVD. “Therefore, CVD has become a crucial socioeconomic burden for diabetic patients, and potential modifiable risk factors are critical for CVD prevention in these patients,” she says.

Phthalates are incredibly pervasive in 2020. Any type of decisive action on reducing human exposure to these harmful chemicals can take years. The industry stakeholders creating these chemicals or using them in their products cry foul any time a study like these two appear. (And they have deep pockets and friends in high places.)

At some point another chemical will eventually be banned but replaced with another, and then other studies like these will appear, and on and on — which is why Leonardo Trasande, MD, MPP, a professor in the Department of Pediatrics at New York University, said last year at a briefing on EDCs on Capitol Hill in Washington, D.C.: “Unfortunately, this chemical Whack-a-Mole problem isn’t going away.”

Until then, Lu recommends reducing phthalate exposure as much as possible, especially in patients with type 2 diabetes. She says that effective prevention strategies include handwashing, avoiding using plastic containers, not microwaving food with plastic containers, and eating organic produce, meat, and dairy.

And a label like “BPA free” can lull people into to a false sense of security but we’re learning that BPS and BPF are toxic, but again, it could be a very long time before either is banned, and even then, another bisphenol could appear.

In that case, MohanKumar recommends avoiding keeping food in plastic. Pregnant women should especially avoid foods that come in plastic-coated containers like cans. “And it’s not that difficult, to do to be honest with you,” he says. “I know there is a movement already, people are not using that much plastic, and they are moving on to stainless steel and things like that.”

The bottom line is that these researchers are asking the questions that should be asked, even if the answers are inconvenient for some. These EDCs are dangerous, period, and should be avoided when possible, even if that means in the development stage of a new plastic cup.

— Bagley is the senior editor of Endocrine News. He wrote the profile of incoming Endocrine Society president Gary D. Hammer, MD, PhD, in the April issue.