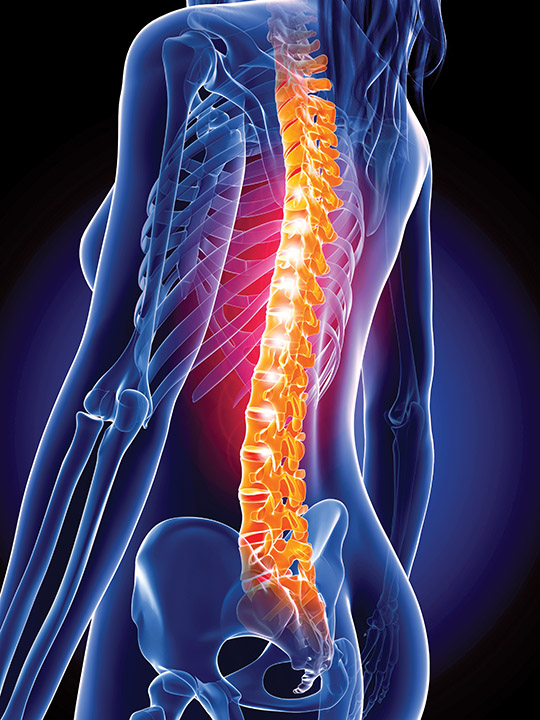 When it comes to bone health, unfortunately the odds are stacked against women, especially during post-menopause. As this public health menace shows no signs of abating, new studies reveal some potential good news.

Although it is known as the “silent disease,” osteoporosis is no less prevalent, harmful, or costly for its stealth. According to the Endocrine Society’s Facts and Figures Report on Bone and Mineral, in the U.S., more than 10 million people have osteoporosis, and more than 34 million have been diagnosed with osteopenia, or low bone mineral density (BMD). In postmenopausal women, this prevalence reaches staggering proportions — by age 60 years, 50% of U.S. women have low BMD and 20% will suffer an osteoporosis-related fracture.

Annually, about 2 million osteoporosis-related fractures occur, and that number could rise as incidence of osteoporosis increases by an estimated 50% by 2025 in U.S. adults age 65–74 years. Recurrent fractures are particularly worrisome as they contribute to progressive disability, loss of independence, and, ultimately, mortality. Some liken the public health menace of osteoporosis in women to that of cardiovascular disease in men. Three recent studies bring some potentially very good news to this problem, however.

Although osteopenia and osteoporosis largely manifest in post-menopause, research presented at ENDO 2016 indicates that risk factors for these conditions can occur much earlier in a woman’s life span. Laura Hernandez, PhD, assistant professor at the University of Wisconsin-Madison; coauthor Chad Vezina, PhD, associate professor at the University of Wisconsin-Madison; and graduate student Samantha Weaver found that using fluoxetine (Prozac), a selective serotonin-reuptake inhibitor (SSRI), during pregnancy and lactation caused decreased BMD past the point when women would presumably start to recover bone mass lost (6%–10%) during breastfeeding. Recent epidemiological studies have even suggested that the more a woman breastfeeds, the less bone mass she has post-menopause. “This is a revolutionary thought that effects of breastfeeding would occur longer term,” Hernandez says.

In one experiment, mice were injected with either saline or the SSRI for ~42 days, from mating through lactation. Three months post-treatment, they were sacrificed to measure BMD. Mice receiving SSRIs had reduced trabecular bone volume compared to control mice.

In another experiment, mice were assigned to either a standard diet or supplemented with 24 mg/kg folic acid, a dose comparable to what women at risk for babies with neural tube defects (NTDs) are prescribed, for a two-week loading period prior to breeding. On pregnancy Day 13, mice were injected with either a saline control or 18 mg/kg of fluoxetine through peak lactation. Using what they call the “weigh-suckle-weigh” method, they determined milk yield as a measure of pup growth and the mammary gland’s ability to make milk. Bone-health measurements demonstrated some reversal of SSRI effects on bone tissue, likely in response to the extra dietary folic acid.

The researchers had previously shown that serotonin was important to increasing mammary secretion of parathyroid hormone–related protein (PTHrP), which regulates bone resorption that is critical for normal lactation. PTHrP is released from the mammary gland via a methylation event in the sonic hedgehog promoter region that drives PTHrP synthesis during lactation. “So we started thinking, if women were taking SSRIs during pregnancy and lactation, they might be exacerbating an already normal response to lactation, which is to pull bone mass to support both the mother’s calcium and milk for the baby,” Hernandez says.

Their next step was to find a methyl donor to reverse serotonin’s effects and replace methyl groups. “Although there are many possible dietary methyl donors, we used folic acid because it is already a common supplement for pregnant and lactating women to prevent NTDs. We hoped to manipulate that to also protect against the SSRI’s bone effects,” Hernandez explains.

Although the SSRI seems to contribute to increased bone resorption and long-term BMD decrease, the mother’s mental health is paramount. Finding a way to treat current depression without forfeiting future bone health would be nothing short of a coup. In ongoing studies, Hernandez and colleagues plan to examine bones at other time points post-weaning, to fully delineate the mechanisms at work in this serotonin pathway, and possibly also consider other dietary methyl donors such as methionine and choline.

In another study presented at ENDO 2016, researchers led by Felicia Cosman, MD, professor of medicine at Columbia University and Osteoporosis Specialist at Helen Hayes Hospital, Haverstraw, N.Y., have found another drug that seems to tip the bone formation/bone resorption balance in favor of formation to result in a net gain of bone. Abaloparatide, a synthetic analogue of parathyroid hormone (PTH)-related peptide, acts through the PTH-1 receptor to stimulate osteoblast formation.

In the phase 3 Abaloparatide Comparator Trial in Vertebral Endpoints (ACTIVE) study, 2,453 postmenopausal women age 49–86 years with osteoporosis based either on BMD or fracture risk criteria were randomized to receive either abaloparatide, placebo, or the positive control teriparatide, currently the sole anabolic agent on the market. By comparing the three arms of the trial, researchers found that abaloparatide reduced vertebral fractures by 86% and nonvertebral fractures by 43% compared to placebo, and abaloparatide reduced major osteoporotic fractures (i.e., clinical spine, wrist, proximal humerus, and hip, similar to what is used in the Fracture Risk Assessment Tool [FRAX] calculation) by 55% compared to teriparatide. Abaloparatide also increased BMD throughout the skeleton at 18 months: spine, 9.2%; total hip, 3.4%; and femoral neck, 2.9% compared to placebo.

“The idea that patients diagnosed with osteopenia or osteoporosis in their fifties might live more than 40 years means that we need different agents that will work in different stages and contexts.” – Felicia Cosman, MD, professor of medicine at Columbia University, New York; osteoporosis specialist, Helen Hayes Hospital, Haverstraw, N.Y.

“We conclude from this analysis that the effect is going to be preserved in various levels of osteoporosis,” Cosman says. “We could potentially use this agent both for people with a recent fracture in whom the imminent fracture risk is very high as well as in people who start with very low BMD, even without a fracture history. Additional improvement in BMD will be seen if the latter patient starts with a drug like abaloparatide then moves to potent anti-resorptive therapy afterward.”

Although teriparatide has been used since 2002 and has been very effective in treating vertebral fractures, abaloparatide might decrease the risk of major osteoporotic fractures even more than teriparatide. Another distinguishing feature of abaloparatide that bears highlighting is its faster action.

“If you look at the Kaplan-Meyer curve for time to first nonvertebral fracture, with abaloparatide, you see an early separation from the placebo group, whereas for teriparatide, you do not actually see the separation from the placebo group until after the first year,” Cosman says. “So it may be that there is a more rapid effect and perhaps a slightly greater effect against nonvertebral fractures with abaloparatide.” Their side effect profiles are also slightly different, although both are generally very well tolerated.

Despite teriparatide’s proven track record, the market has room for another anabolic, as Cosman explains. “My hope is that we will be able to use both of these agents at different stages in a woman’s postmenopausal lifespan,” she says. “The idea that patients diagnosed with osteopenia or osteoporosis in their fifties might live more than 40 years means that we need different agents that will work in different stages and contexts. It fits in with an overall concept we are trying to develop, which is to use anabolic therapy earlier in the disease process and not to reserve this therapy only for the patient who has already sustained several fractures.”

Finally, in the July 2016 issue of The Journal of Clinical Endocrinology & Metabolism, “Quantifying the Balance Between Total Bone Formation and Total Bone Resorption: An Index of Net Bone Formation” showed that markers for bone turnover can be combined to provide a picture of net bone resorption and bone formation. Knowing when these simultaneously occurring processes are out of balance could identify a patient at risk for osteoporosis. “At present, we can measure markers of bone breakdown (resorption) and formation. However, we hypothesized that to better predict how fast bone will be lost in the future, these markers should be combined in an ‘index’ to reflect both processes, rather than being interpreted in isolation,” says study author Albert Shieh, MD, of the University of California, Los Angeles.

The bone balance index (BBI) grew out of data gathered from 685 premenopausal or early perimenopausal women ages 42–52 years in the 1996–2013 Study of Women’s Health across the Nation (SWAN). Shieh and colleagues measured urinary N-telopeptide, a resorption marker, and blood osteocalcin, as well as annual BMD as the women transitioned to menopause. The BBI — calculated from bone turnover markers collected before the final menstrual period — was able to predict which women were at risk for fast BMD loss (most notably in the lumbar spine). “We found that the ability of our new [BBI] predicted future bone loss across the menopause transition better than the bone resorption marker alone,” Shieh says.

“We do have to caution that this study was proof-of-concept,” Shieh says, “showing that combining bone resorption and formations markers in an index can improve our ability to predict how fast someone will lose bone across the menopause transition compared to a bone resorption marker alone.” Future studies will look at whether the BBI can identify at-risk women for fast bone loss after the menopause transition (during post-menopause) and whether the BBI can be used to predict fracture risk.
— Horvath is a freelance writer based in Baltimore, Md. She wrote about the likelihood of sedentary kids developing diabetes in adulthood in the July issue.