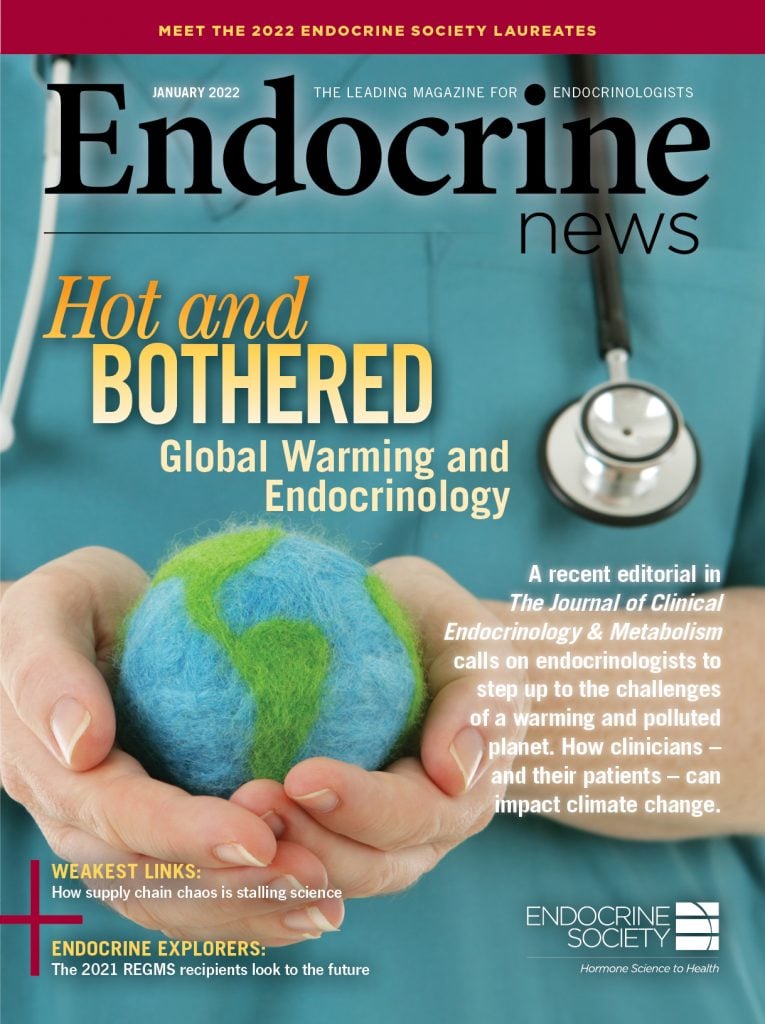 Endocrine leaders say it is time for endocrinologists to step up to the challenges of a warming and polluted planet, according to a recent editorial in The Journal of Clinical Endocrinology & Metabolism. But what are the challenges in changing the behaviors of patients as well as clinicians?

Endocrinologists need to broaden their work for better health to include not only their patients, but also the Earth, the editors of the Journal of Clinical Endocrinology & Metabolism recently urged their readers.

Editor-in-chief Paul M. Stewart, MD, and deputy editors Ursula B. Kaiser, MD, and Raghavendra G. Mirmira, MD, collaborated on a special editorial, “Environmental Pollution, Climate Change, and a Critical Role for the Endocrinologist,” that says: “The challenge is real, the evidence base is compelling, and we can all play our parts.”

Stewart, a professor at the University of Leeds in the U.K, says that the idea came to him from his work with the U.K. Academy of Medical Sciences: “It struck me that there was a major endocrine aspect to this that we really needed to be on the front foot about. The purpose of the editorial was to raise awareness across endocrinologists and hopefully stimulate much-needed change. The Endocrine Society certainly appears to be taking this seriously, and other societies across the globe are also interested.”

• Endocrinologists can and should be involved in action to combat climate change, the editors of the Journal of Clinical Endocrinology & Metabolism write.

• Climate change and pollution are inextricably linked to issues such as food choices, agricultural practices, obesity, and type 2 diabetes.

• The Endocrine Society has joined the Medical Society Consortium on Climate and Health to provide education and advocate for policies to combat global warming.

In September, health professionals worldwide highlighted the danger of climate change with an editorial published simultaneously by more than 200 medical journals as a “call for emergency action to limit global temperature increases.” Editors of the New England Journal of Medicine, The Lancet, and The BMJ joined a who’s who of international journals to call for “governments and other leaders to act, marking 2021 as the year that the world finally changes course. Higher temperatures have brought increased dehydration and renal function loss, dermatological malignancies, tropical infections, adverse mental health outcomes, pregnancy complications, allergies, and cardiovascular and pulmonary morbidity and mortality.”

This widely published editorial was a more generic call for action, whereas the JCEM article focused on the endocrine aspects of the crisis and the special role endocrinologists can play.

Endocrinologists have been active in alerting the public to the dangers of pollution for some time, but a concern with the tie between climate change and endocrine function is relatively new.

The most-studied effects come from the many endocrine-disrupting chemicals that have been shown to interfere with hormone action. And more evidence is accumulating that particulate matter air pollution not only exacerbates asthma, lung dysfunction, and respiratory disease, but is also implicated in contributing to type 2 diabetes and premature delivery.

The editorial points out that the endocrine system can be affected by both broad categories in which climate change can affect health: the direct impact of heat and extreme weather events as well as the indirect effects on ecosystems that lead to changes in food and water supplies.

The editorial makes an important connection between climate change and perhaps the greatest challenge endocrinologists face in their practices — the epidemics of obesity and type 2 diabetes. “Endocrinology must take center stage in the food consumption–energy expenditure debate” because of food consumption’s direct relationship to obesity and diabetes. The editors note that better dietary choices can contribute to better health both of the individual and the planet: “Avoiding overconsumption and striking a better balance between animal- and plant-based food can have benefits for both health and the climate.” Dietary changes could reduce greenhouse gas emissions and agricultural emissions enough to lead to a 19% reduction in mortality from particulate-matter air pollution.

And the flip side of the energy equation is that if individuals replace their motors with their muscles to transport themselves places, the result will be not only a reduction in their greenhouse gas emissions, but an increase in their personal caloric expenditures that will benefit their health.

Mirmira, who is director of the Translational Research Center at the University of Chicago, says that endocrinologists can respond to climate change in both their practices and personal lives. “There are many aspects of how we counsel our patients that have an impact on the environment,” he tells Endocrine News. “We can talk about balanced food choices that reflect better stewardship of our environment, excessive meat consumption, and how farming animals contributes to methane and nitrite release. We can recommend altering diets in ways that reduce our exposure to foods that impact our environment but also reduce the global obesity epidemic. We can also consider the  ways we practice medicine. To what extent do we need to be commuting every day to work in a car versus taking public transportation, biking, or walking? Can we employ telemedicine more broadly?”

“I think that as a group, we can help to bring attention to the issue, particularly to some of the deniers who don’t recognize the importance,” agrees Kaiser, who is chief of the Endocrinology Division at Brigham and Women’s Hospital in Boston. “By bringing their health into it, and telling patients how these environmental changes can be impacting their health, we may help them to recognize that this issue may be more important than they had previously thought. Highlighting how climate change may be impacting metabolism and risk of diabetes might start them thinking more about climate change.”

For its part, the Endocrine Society has become involved by joining the Medical Society Consortium on Climate and Health, 38 medical groups that include about 70% of U.S. physicians. Daniel Oppenheim, PhD, MD, a clinical endocrinologist at Maine Medical Center in Scarborough, is the Society’s representative to the consortium.

“The consortium is very effective, both in terms of educating physicians and healthcare practitioners of all types about the connection between climate change and human health, but also inside the Beltway,” Oppenheim says. “The Build Back Better bill contains some excellent climate policy provisions, as does the infrastructure bill, and the consortium has clearly played an important role in ensuring that those types of policies are included in broad legislation like these two bills.”

“Having an editorial like this in a major journal is a hugely important step because it helps to legitimize climate change as the medical and public health issue that it truly is,” Oppenheim says. “We need to use our position in society as physicians and scientists to leverage our voices to influence public policy. It has an impact when medical societies advocate for policies that help mitigate climate change and when individual physicians express their opinions by, for example, writing letters to the editor and meeting with their legislators. We need to help blow the political winds in the direction that makes it safe for policy makers to change regulatory and legislative policies toward preventing the disaster that is looming if we allow the planet to continue to warm.”

Stewart says that organizers of the 2022 Endocrine Society annual meeting are discussing how to integrate sessions and information on climate change into the program.

In addition to educating patients and advocating to policy makers, “we should be mindful of our personal carbon footprint in all we do,” the editorial says. The endocrinologists interviewed for this article all said that they have changed their behavior in response to climate change by installing solar panels, commuting to work less, using more telemedicine, eating a more plant-based diet, and more.

“We can all make choices that will benefit our own lives while collectively, by reducing greenhouse gas emissions, benefiting the lives of others,” the editorial says.

Seaborg is a freelance writer based in Charlottesville, Va. He interviewed Sparrow Pharmaceuticals chief science officer and founder, David A. Katz, PhD, in the December issue.