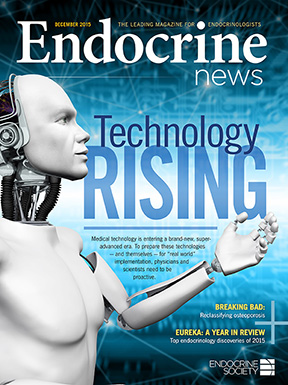 Medical technology is entering a brand new, super advanced era. To prepare these technologies — and themselves — for “real world” implementation, physicians and scientists need to be proactive.

Healthcare technology has never been hotter. Collaborations among entrepreneurs, engineers, and providers have resulted in an explosion of innovative tools that are reshaping medicine as we know it.

And this new technology could not be arriving at a better time — rates of obesity, diabetes, cancer, and other diseases are out of control. Combine that with the shortage of endocrinologists, and the situation is clear: We need faster, better ways to meet the demand for care.

Some technologies are attempting to increase the efficiency and effectiveness of healthcare delivery. Others are making it easier for individuals to manage their own wellness. Each tool tackles a different challenge from a different angle, and
endocrinologists are oft en leading the medical community as early adopters.

“For the first time, the healthcare system is becoming ‘wired’ in the ways we have come to expect in other industries,” says Aaron Neinstein, MD, assistant professor and medical director of informatics, University of California, San Francisco.

During the year aft er his residency, Neinstein helped lead the rollout of the electronic health record (EHR) system Epic at the University of California, San Francisco. This formative experience launched his career in clinical informatics but also indicated the major shift to digital that would eventually spread across the country.

Now that nearly all health systems use EHRs, the implementation of other digital initiatives is getting easier. From “big data” analysis to artificial intelligence (AI), the inevitable collision of technology and healthcare has finally reached a tipping point — showing great promise for applications in a large variety of arenas.

The startup world is playing a critical role in this evolution, and entrepreneurs are winning big in the new healthcare economy.

Take Elizabeth Holmes for example. At just 31 years old, she is now the youngest self-made female billionaire in the world. Her company, Theranos, makes lab tests faster and much cheaper than normal. She invented “lab-on-a-chip” technology that can run hundreds of common tests with just a finger prick. Theranos is set to become available in drug stores in the near future — allowing
consumers to buy lab tests directly and for a fraction of
the cost.

Holmes may be the Steve Jobs of healthcare technology, but she is not alone in her success. Healthcare is among the fastest-growing industries in the country. Companies that create “wearables” — watch-like devices that gather individual health data — have seen an incredible surge in business, with FitBit alone growing its revenue by over 5,000% in just three years. Telehealth companies have also experienced a particular rise in popularity.

“There is a lot of excitement in healthcare about technology that allows providers to monitor patient data remotely,” Neinstein says. However, he does not expect endocrinologists to find the success of telehealth surprising. “This has been done for decades in diabetes,” he explains.

The life sciences division of Google Inc. has a few projects in the works that would further enhance telehealth for diabetes management. In partnership with the French pharmaceutical company Sanofi SA, they are developing contact lenses that monitor blood glucose levels and may also improve the eye’s ability to focus.

Google is also working with DexCom, Inc., on a continuous glucose-monitoring (CGM) device about the size of a Band-Aid, which would be worn directly on the skin.

Some of the top minds in science, business, and engineering are converging in Silicon Valley to bring such space-age notions to life. If these companies attain their ambitions, physicians will have better tools, patients will experience improved care, and companies in the healthcare economy will see great profits.

But, there is an ongoing conversation about reimbursement that still needs to be addressed. Insurance companies and health systems have not quite figured out the problem of billing for time spent on telehealth. Until this issue is resolved, it will remain a roadblock for further expansion.

Much of the boom in health technology comes from an influx of apps and devices
for individual use. From calories burned to blood oxygen levels, more and more people are collecting personal health data on a daily basis.

Again, this trend started many years ago for diabetes care but only became mainstream in the past few years. Th e advent of the FitBit and the Apple Watch has taken the volume and quantity of self-tracking to a whole new level. Some individuals now sync every moment of their day with soft ware applications that analyze their well-being, including sleep patterns, physical activity, average heart rate, and more.

Researchers are working to specialize such technology to improve the quality of life of people with chronic illnesses. In the meantime, the artificial pancreas has made incredible advances in the realm of medical devices, a product category that requires far more rigorous testing than consumer wearables.

“A closed loop ‘artificial pancreas’ technology for type 1 diabetes is the big game
changer that we are all looking forward to,” says Neinstein.

There are multiple models of the artificial pancreas in the works, and the first iterations are expected to be on the market within a few years. Some of the
prototypes currently in clinical trials rely on an iPhone or other smartphone to operate. As research continues, future versions are likely to get smaller and offer more individualized features, like a custom glucose control algorithm.

The convenience of wearables and apps empowers individuals to take greater control of their day-to-day health, while also providing a wealth of data that may improve individual treatment plans. However, the actual medical impact of such gadgets remains to be seen. The artificial pancreas, on the other hand, offers mobile technology with vast and proven health impact.

Naturally, there are privacy concerns when it comes to collecting health data through any digital platform. But the information gleaned from tracking large swaths of the population can also be an extremely valuable resource for medical research. Big Data is getting bigger, and most scientists seem excited about its prospects.

When medical researchers hear the term “predictive analytics,” their ears perk up. The single greatest source of buzz around Big Data and healthcare comes from this concept. Just as the name indicates, predictive analytics make it possible for providers to stop adverse medical events before they occur.

New algorithms can identify at-risk patients based on environmental factors, medical records, genetics, lab tests, and the personal health data gathered from mobile devices. Once streamlined, these combined sources of information can contribute to efficient diagnoses and faster, more effective interventions — helping to ensure that health issues are identified and treated before they become irreversible.

Big Data is also changing the way scientists conduct research. Traditionally, a scientist would form a hypothesis, devise an experiment to test it, and form a conclusion based on the results. Now, massive cloud databases are making it possible to test hypotheses without ever conducting a physical experiment.

Some physicians are even using Big Data to make tough treatment decisions on the spot. By running the numbers on similar patients in their EHR system, a provider may be able to quickly evaluate the risks and success rates of different courses of treatment.

Ultimately, a universal database of health data on the entire population (or close to it) may become a reality, speeding up the pace of discovery and forever changing the way that healthcare works.

The next logical step after Big Data is artificial intelligence.

Robots have been helping physicians complete operations and other tasks for some time, but always under human control. AI might make it possible for robots to help treat patients with little to no physician involvement.

“Some of the most common and simple issues could be handled with artificial intelligence,” says Neinstein. “This would allow us to leverage ourselves and our time better, rather than having everything be one-on-one care.”

He believes that personal interaction between provider and patients is important, but recognizes that healthcare would be faster and more affordable if in-person appointments could be reserved for more complex cases.

“We could still see many patients in our offices, but shift some of our time to doing population management,” Neinstein continues.

AI can take many forms and perform a variety of functions. Perhaps the most notable example is IBM’s Watson — the cognitive computing system that won Jeopardy! back in 2011. Named for the famous sidekick from the Sherlock Holmes stories, Watson can make medical recommendations in addition to providing legal analysis and Internet retail advice.

Consumer surveys have shown that people are happy to have robot helpers in certain scenarios. However, people still prefer a real human for deeply personal situations. No one seems to want a robot taking care of their children and they are unsure about relying on artificial intelligence to diagnose an ailment.

But the tides are nonetheless shifting in favor of machines. With Siri proving to be a helpful companion for anyone with an iPhone, consumers are warming up to the idea of AI medical providers.

Once computing systems like Watson pass some essential tests, they can start taking some of the pressure off overextended physicians.

Neinstein, like many providers, has taken a conservative approach to actually implementing most of these new digital tools.

“I am careful not to push new technologies onto patients unless there is a clear or likely benefit,” he explains. “If a patient wants to try a particular new app or device, I will work with them to review the data if I don’t see any potential for harm. And I only recommend something like this when I really think the technology is a good fit for their situation.”

The question of protecting patient confidentiality is still lingering over all these new technological advances. Additionally, some technologies and apps have not undergone the rigorous approval process that is involved for traditional medical devices. Many physicians are holding off on incorporating such tools until they are empirically proven to be safe, private, and effective.

But that’s not to say that progress is not being made on these fronts.

“All healthcare systems have health IT leaders who are thinking about the future and how to map out the road ahead,” says Neinstein.

He encourages providers to participate in this process. “Join committees. Speak up. Sign up for a pilot study of a technology. Be a part of the change,” he says.

Each new technology generally requires another username and password, and another interface to learn how to use. The goal is to seamlessly integrate these tools together to create better and more efficient healthcare.

“We want to use technology to make care more personalized and more personal, not less so,” Neinstein continues.

And the expectation for these tools to make their way into healthcare is unavoidable. In most other industries, individuals can now get exactly what they need in a matter of clicks. Medicine might take a while to catch up, but digital health is clearly entering its golden age.

Mapes is a Washington D.C.-based freelance writer and a regular contributor to Endocrine News. She wrote about transgender hormone therapy in the October issue.