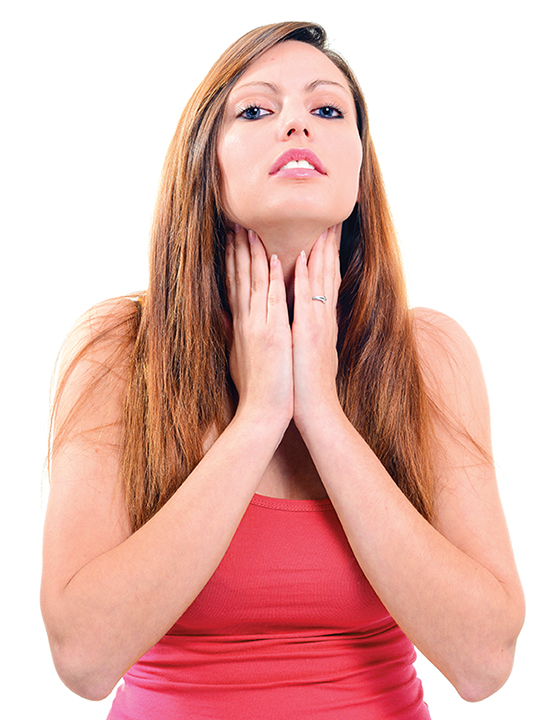 Although it’s an “off-label” procedure that has only been mastered by a handful of surgeons in the U.S., some patients are opting for a robotic transaxillary thyroidectomy simply to avoid a prominent scar.

When a 43-year-old Florida woman needed thyroid surgery, she consulted several surgeons in several states in her search for her best option. She traveled to North Carolina to have a robotic transaxillary thyroidectomy at Duke Medicine — so she could avoid having a scar on her neck.

There are several versions of robotic thyroidectomy, but transaxillary is the most common in the U.S., in which the surgeon makes an incision in the armpit and operates miniature instruments through remote control. Although it is still rare — there have been only about 1,000 so far in the U.S. — it has a following among a group of patients and surgeons who find it very appealing. In February, the American Thyroid Association (ATA) published an official statement that concludes: “Remote-access thyroidectomy has a role in a small group of patients who fit strict selection criteria. These approaches require an additional level of expertise, and therefore should be done by surgeons performing a high volume of thyroid and robotic surgery.”

In the right hands, remote access and conventional surgery have comparable complication rates, says Stang, who is an associate professor of surgery at Duke University.

The surgery was pioneered in South Korea by Woong Youn Chung, MD, PhD, of Yonsei University, and there are reasons that it started there, Stang says. First, there are many more thyroid surgeries done there because in South Korea thyroid screening is done at the same time as breast cancer screening, so they find more thyroid problems. Second, the culture places a high value on avoiding a scarred or blemished neck, especially among relatively young women, so more patients are interested in such a procedure.

Stang trained with Chung, as did Renu Sinha, MD, an endocrine surgeon at Inland Surgical Associates in Spokane, Wash. Sinha says that Intuitive Surgical, manufacturer of the da Vinci Surgical System used in the technique, trained only about 50 American surgeons, all of them high-volume. Then in 2011, the company notified surgeons that there was no specific Food and Drug Administration approval for the use of the system for thyroidectomies, so the company would not be supporting the use. That put the surgery off-label, which dampened many surgeons’ enthusiasm for it, but others recognized that “it is not unusual to prescribe drugs or perform procedures in medicine that are considered off-label that provide patient benefits,” Sinha says.

The ATA statement lays out clear patient selection criteria: The patient should be thin enough for easy access without interference from scar tissue from previous shoulder or neck surgery. The tumor should be less than 3 cm, with no thyroiditis, and the thyroid should not be larger than 5 or 6 cm. Contraindications include thyroid cancer with extension to lymph nodes, Graves’ disease, and substernal disease.

“The patients who are candidates are about 5% of the clinical volume in an academic setting, where we see more complicated patients,” says Eren Berber, MD, who is a professor of surgery and director of robotic endocrine surgery at the Cleveland Clinic. “Whereas if you go to a community setting, the percentage increases to maybe 20 to 25% of patients.” Berber and Stang both contributed to the ATA statement. 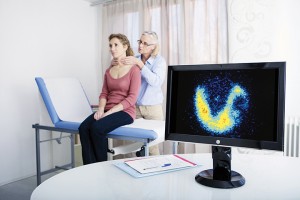 Sinha says that there are possible complications in the robotic approach that aren’t associated with conventional thyroidectomy — including chest wall numbness and brachial plexus injury — that require additional attention to avoid.

Another hurdle to the surgery is cost, which Sinha says is “probably $3,000 or $4,000 more for the hospital than standard thyroidectomy, although the charge to the patient is the same regardless of approach,” so institutions have to be supportive of the effort. It involves longer operation times, even though the selection criteria mean it is reserved for simpler cases. Berber says that at the Cleveland Clinic, patients are charged the same for robotic and conventional surgery. And Stang adds that a high-volume surgeon’s skill can bend the cost curve downward. In South Korea, reimbursement for robotic thyroidectomy is four times more than for conventional surgery.

“It comes down to a personal choice,” Stang says. Thyroid nodules and thyroid cancer are three times more common in females than males, and almost all of the patients who choose this surgery are females. Of the 350 procedures Stang has performed, only two have involved men.

One of Sinha’s patients, who was 34 at the time of the operation, says she chose the procedure because she knows from experience that her scars don’t heal well: “I have darker skin, and my scars tend to get purplish and stay dark. On some people, they tend to become this silvery white and fade away, but on me it has never been that way. I have scars that have been red for years and never faded to a light white color.”

“There is a subgroup of patients who have concerns about their cosmetic incision, and also patients who have bad wound healing problems, so these patients need some alternative way of hiding the scar somewhere else in their body,” Berber says. “They would otherwise not be happy with their operation, and you give them an option where they get a lot of satisfaction.” – Eren Berber, MD, professor of surgery, director of robotic endocrine surgery, Cleveland Clinic, Cleveland, Ohio

Stang’s patient from Florida said that she was also drawn by the lack of a visible scar and called the choice was a “no-brainer.” She made that decision despite the fact that cytological analysis of a specimen from her nodule obtained by fine needle aspiration indicated her cancer risk was approximately 40%, so she could face additional surgery later. She traveled to Duke, where Stang examined her and reviewed her test results. He removed half her thyroid the next day, and the patient flew home the day after that. The pathology analysis revealed a benign nodule requiring no further treatment. She has good thyroid function with her remaining gland and says she is satisfied with her outcome.

“There is a subgroup of patients who have concerns about their cosmetic incision, and also patients who have bad wound healing problems, so these patients need some alternative way of hiding the scar somewhere else in their body,” Berber says. “They would otherwise not be happy with their operation, and you give them an option where they get a lot of satisfaction.” A third of his patients come from out of state, and from as far away as the Middle East, for the procedure.

“Some women don’t mind having traditional surgery with a scar on their neck. For others, it is a bigger concern, and they are the ones who seek out the robotic technique,” Stang says.

— Seaborg is a freelance writer based in Charlottesville, Va. He wrote about the Endocrine Society’s new Clinical Practice Guideline on treating primary aldosteronism in the September issue.

• Remote-access thyroid surgery can avoid leaving a scar on the patient’s neck.

• When an experienced surgeon applies strict patient selection criteria, robotic surgery’s complication rates appear to be on a par with those of conventional surgery.

• Some patients value the benefits enough to travel great distances to find a surgeon.