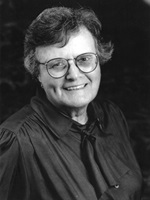 But you may say, we asked you to speak about women and fiction – what has that to do with a room of one’s own? … All I could do was offer you an opinion upon one minor point – a woman must have money and a room of her own if she is to write fiction….
Virginia Woolf
“A Room of One’s Own”

Now, I no longer have a lab of my own. What a strange place to be’.
Neena B. Schwartz, PhD
“A Lab of My Own”

Neena B. Schwartz died peacefully and in the presence of family on April 15, 2018 in Evanston, Ill., at the age of 91. She was a tremendous scientist, a pioneer for women in the sciences, and a leader in our discipline of endocrinology. These attributes and many more relating to her journey through life are captured brilliantly in her autobiography, A Lab of My Own (2010, Brill/Rodopi), which is required reading for members of the Northwestern Center for Reproductive Science, the organization she founded and led for the majority of its 30-year history.

Neena was an honors graduate of Goucher College in her native Baltimore, Md., and earned a PhD in Physiology from Northwestern University in 1953. She accepted a position as instructor in physiology at the University of Illinois College of Medicine, moved to Michael Reese Hospital, and returned to a tenured position at UIC, becoming both full professor and serving as Dean of Faculty Affairs. In 1973, she moved to Northwestern University Medical School as Chair of Biology and after several years relocated to Evanston as a founding member of the Department of Neurobiology and Physiology, where she held the William Deering Professorship in Biological Sciences within the College of Arts and Sciences until her retirement in 1999. In 1980, she organized the Program in Reproductive Research and in 1987 became founding Director of the Center for Reproductive Science, a peak experience for Neena in creating a home for the work that she loved and the faculty and students she recruited. Neena trained over 50 graduate students and postdoctoral fellows.

Neena’s legacy lives on in the discoveries she made, the people she trained, the organizations she formed and the amazing life she led. She was a phenomenal mentor to each of us, and her guidance, friendship, and commitment to scientific rigor and excellence will all be greatly missed.

Neena was trained as a physiologist, and her laboratory focused on the factors that establish reproductive cycles in mammals. Perhaps most notable was her work on the role of ovarian inhibin in negative feedback regulation of FSH secretion in the female. One of her most impactful papers was published in PNAS in 1977 in which she and the late Cornelia Channing, a biochemist from the University of Maryland, described the identity of female inhibin (folliculostatin) in follicular fluid. Work prior to their discovery was primarily in the male and this pivotal study opened the entire field of peptide negative feedback regulation and ushered in the discovery of the larger TGFβ-superfamily of ligands. The impact of her studies was recognized by her election to the American Academy of Arts and Sciences in 1992, among many other awards and honors.

Neena was a life-long learner in all respects. Following the cloning of inhibin, she quickly saw the promise of molecular biological approaches to complement her physiology and endocrinology expertise and spent a year sabbatical in the laboratory of the late Jack Gorski at Wisconsin, immersing herself in learning and applying this technology, a period Neena often described as one of the most impactful and enjoyable of her long career.

Neena was also a leader. Notably, in 1971 she was an organizer and first president (1971-1973) of the American Women in Science (AWIS). AWIS was founded and still advocates for an increase in the number of women in tenure track positions, and on NIH study section review panels. In 1974 AWIS sued the NIH to stop all appointments to study section. Famously, when provided with a list of over 400 study section vacancies, AWIS responded by providing the names of 1,000 qualified women scientists. Neena was the president of the Society for the Study of Reproduction (1977-1978), president of the Endocrine Society (1982-1983) and co-founder of Women in Endocrinology. Her leadership was recognized by the Williams Distinguished Leadership award of the Endocrine Society in 1985.

Neena loved birding, her cottage in Door County, Wisconsin, and the Chicago Symphony Orchestra. She was preceded in death by her partner, Claire Wadeson, a pioneer in her own right as an art therapist. Neena’s legacy lives on in the discoveries she made, the people she trained, the organizations she formed and the amazing life she led. She was a phenomenal mentor to each of us, and her guidance, friendship, and commitment to scientific rigor and excellence will all be greatly missed.