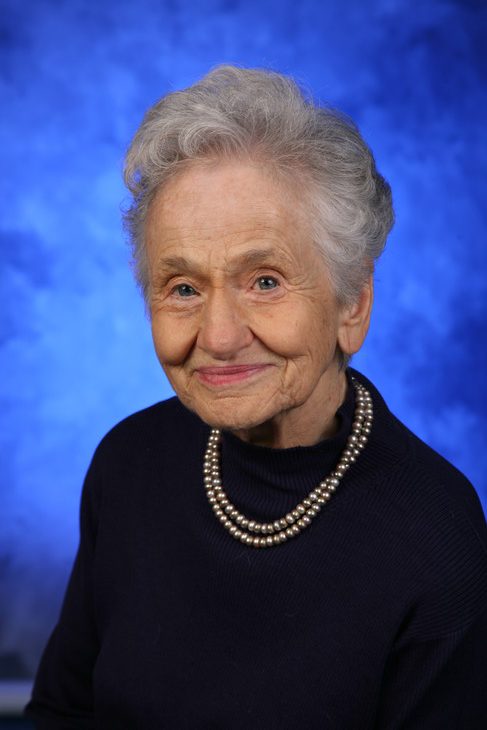 Dr. Judith Weisz, professor of obstetrics and gynecology at Penn State College of Medicine, passed away on Oct. 27 at the age of 94.

She was one of the longest-serving faculty members at Penn State College of Medicine with more than 45 years of service and was the first female faculty member to be tenured and granted the rank of full professor. Her peers remember her as an outspoken advocate for equity and for her devotion to research.

Weisz authored more than 95 research publications and more than 20 invited reviews, chapters and reports. She was posthumously recognized during the 2020 Research Recognition Awards for the 500 times researchers cited her paper, “Plasma testosterone and progesterone titers of pregnant rats, their male and female fetuses and neonatal offspring.” She served on many editorial boards and was often part of national conversations on research related to reproductive health.

Born in Budapest in 1926, Weisz and her family were forced out by the Nazis and escaped to England. There, she completed her undergraduate and medical degrees at Newnham College at Cambridge. Deb Shearer, a research associate of Judy’s, recalled that Judy was proud to be a member of the first graduating class from her medical school in which females received the same medical degree as males. Prior to that, female graduates had received certificates. She did her clinical training in Israel and served as an officer in the Israeli Army before coming to the U.S. in 1960.

Weisz worked in the Department of Endocrinology at Mount Sinai Hospital before moving to the Worcester Foundation for Experimental Biology, where many of the basic and animal studies were conducted prior to testing oral contraceptives in women. The foundation was the center of reproductive biology and steroid biochemistry in the 1950s and 1960s. Weisz’ interest and experience in steroid biochemistry led to her work on breast cancer.

Weisz came to Penn State in 1972 and studied a variety of topics from prevention strategies and mechanisms for development of breast cancer to birth control and prenatal diagnosis of spina bifida. The National Institutes of Health, the American Cancer Society and the March of Dimes are among the organizations that funded her research. She served on the faculty senate from 1976 to1980 and was part of the promotion and tenure committee from 1991 to 1993.

“Judy was a study in tenacity. She did not bend.  She did not break.  She held her ground while fighting against the discrimination that she faced in her lifetime for her religion, place of origin and gender.” – Richard Legro, MD, chair, Department of Obstetrics and Gynecology; professor of Obstetrics and Gynecology and Public Health Sciences Penn State College of Medicine and Penn State Health; Milton S. Hershey Medical Center, Hershey, Pa.

From 1981 to 1985, Weisz chaired the U.S. Food and Drug Administration’s Public Board of Inquiry on Depo-Provera, an injectable hormonal birth control method. Dr. Richard Legro, chair of the Department of Obstetrics and Gynecology, says Weisz was particularly proud of her role in delaying this drug’s approval to market because she felt it had harmful reproductive effects.

Dr. Laurence Demers, distinguished professor emeritus of pathology and medicine, first met Weisz in 1972 when she interviewed him for his position at the College of Medicine. Demers admired her ability to bring nationally renowned researchers to campus to spur new ideas among the faculty. He also was inspired by her passion for equity and mentoring of female faculty.

“She was attuned to the fact that there was a lack of female faculty and saw it upon herself to make sure that they had what they needed to be successful,” Demers says. “She would do what she could to help them navigate the challenges of research and academia so that they could get published and advance in their careers.”

In the past decade, Weisz worked to add the Toponome Imaging System (TIS) to the College of Medicine’s arsenal of advanced microscopy systems. This system allows researchers to see how proteins are organized into large structures and networks within tissues and cells. She received extramural funding, including financial support from her family to bring the first TIS in the U.S. to the College of Medicine. Her interest in studying the changes in molecular biology between the initiation of breast cancer and its first clinically recognizable form was what led her to pursue this new instrumentation.

“Judy wanted me and others to understand that proteins were not static, but dynamic and highly adaptive,” says Dr. Sue Grigson, professor and chair of the Department of Neural and Behavioral Sciences. “She wanted us to realize that cancer was about adaptation, much of which is in response to toxins in our environments. Toxins that her research showed accumulate in breast tissue.”

During the course of her time at the College of Medicine, Weisz mentored many faculty and students. Dr. Diane Thiboutot, professor of dermatology and associate dean of clinical and translational research education, remembered that Weisz had a passion for helping others achieve their research goals.

“She spent a great deal of time with me early in my career helping me to convey my scientific ideas in a compelling way.  She told me that my research needed a ‘story’ that would capture the imagination of scientific reviewers,” Thiboutot says. “Judy kept in touch with me and would drop in to discuss an interesting paper she had read that she thought would relate to my research.”

Weisz actively sought to collaborate with other faculty members during her career. Dr. Joanna Floros, Evan Pugh University professor in Cellular and Molecular Physiology, in the Departments of Pediatrics and Obstetrics and Gynecology, recalled that after giving the Dean’s Lecture in 1998, Weisz found connections between their work and formed a new interdisciplinary research team.

“That’s just one example of how she would see something and then engage other faculty members to collaborate,” Floros says. “She was a bridge. She brought people from different disciplines who were experts in different technologies and subject areas together to answer research questions. As a result of such efforts, she was active in research until the final days of her life – not something many 94-year-olds can claim. A manuscript she coauthored was accepted for publication in a top journal just days before her passing.”

Colleagues remember Weisz not only for her devotion to her work, but her dedication to equity.

“Judy was a study in tenacity,” Legro says. “She did not bend.  She did not break.  She held her ground while fighting against the discrimination that she faced in her lifetime for her religion, place of origin and gender.”