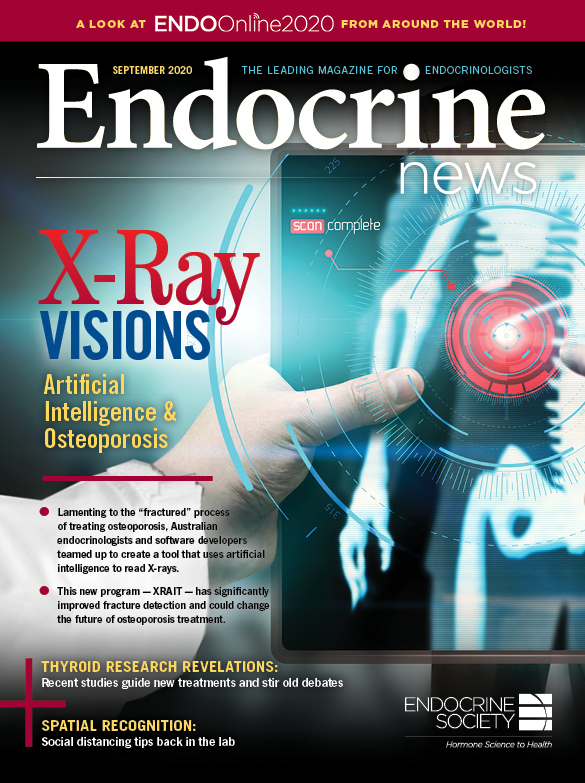 Due to the “fractured” process of treating osteoporosis, Australian researchers and software developers teamed up to create a tool that uses artificial intelligence to read X-rays. The new program —XRAIT — has significantly improved fracture detection and could change the future of osteoporosis treatment.

Christopher White, MBBS, PhD, FRACP, an endocrinologist at Prince of Wales Hospital in Randwick, Australia, was trying to recruit patients for a clinical trial studying how the drug romosozumab affects patients with osteoporosis, but he found that the recruitment program was very rigid – the sponsor wanted not just patients with low T Scores who met the criteria for osteoporosis, but evidence of vertebral compressions as well.

White was confident he’d meet his criteria; after all, he treats patients with osteoporosis regularly. He looked through discharge data, for patients with vertebral compression fractures, and figured even if he only found 10% of these patients, or had 10% referred to him, he could recruit with plenty of patients to spare. But despite his best efforts, he didn’t meet his recruitment targets, and the study closed.

It turns out, when these patients were discharged from the Prince of Wales Hospital Emergency Department, they were sent to respite care, White says, and none was sent to him.

The current situation is something like this: an 80-year-old may present to the emergency room with vertebral compression fracture, but because of the patient’s age and condition and competing pressure in a busy ER, physicians will only want to deal with the immediate fracture, then send the patient to respite care and eventually home.

Or a patient may present with breathlessness and the radiologist sees a vertebral crush fracture. “The query on the X-ray report is, query pneumonia or heart failure,” says Jacqueline Center, MBBS, PhD, FRACP, the head of the Clinical Studies and Epidemiology Lab at Garvan Institute of Medical Research in Sydney, Australia. “The report comes back as mild evidence of COPD, or something like that, but no evidence of pneumonia. They don’t even bother reporting the fracture, because no one even thinks about it.”

Even when the vertebral crush is reported by the radiologist, the ER physician is focused on the immediate problem and will treat the pneumonia or heart failure and leave the fracture for “someone else” to deal with at a later time.

“The process of treating osteoporosis is fractured,” White says.

About 44 million Americans are at risk of osteoporosis and have an increased risk of fractures because of low bone mass. Only two in 10 older women in the U.S. who sustain a fracture receive testing or treatment for osteoporosis, according to the National Osteoporosis Foundation. Although many hospitals have implemented fracture liaison services to identify patients whose fractures could be due to osteoporosis, Center says that manually reading the radiology records of referred patients misses some people at risk of osteoporosis or detects them too slowly.

So White had an idea. He decided that he could do for fractures what he did for bone density. He can already screen for a number. Why not screen for a diagnosis, using artificial intelligence (AI). He secured a relatively small grant to design a pilot program with a friend who develops software. “We played around with it, and it kind of worked,” White says. “We just had a pilot [software program] that would read radiology reports. We took out some samples, and it seemed to work. Then I applied for a local grant, AU$100,000 grant at my hospital, to build it and install it.”

White and his team dubbed this new technology X-Ray Artificial Intelligence Tool, or XRAIT. This search tool uses natural language processing software to understand human language and make communicating smoother and more uniform. “We all speak differently, so that’s why I had to go towards natural language processing, to be able to interpret and learn the nuances in dialect, for instance,” White says. “Australians speak differently to North Americans. We can understand each other. But there are differences in reporting, and in style.”

To test XRAIT, White, Center, and their team had the tool search 5,089 digital radiology reports from patients over 50 years of age who went to a hospital’s emergency department and had bone imaging over three months. The researchers compared XRAIT’s results with manual review of the records of the 224 patients referred to the hospital’s fracture liaison service in the same period. XRAIT was able to detect 349 people with fractures likely due to low bone mass compared with 98 people identified by the manual method, an over three-fold higher detection rate.

The researchers then tested XRAIT on the digitized radiology reports of another population of Australian adults over age 60 from the Dubbo Osteoporosis Epidemiology Study. From 327 reports of confirmed known fractures and non-fractures, XRAIT accurately identified fractures nearly seven of 10 times and correctly screened out patients without fractures more than 90% of the time.

So now, for the patient who presents with breathlessness, whenever there is a report of fracture, even if the physician doesn’t respond, the artificial intelligence running in the background should. “In other words, you bypass the physician’s brain, and use an AI one,” White says.

White and Center were supposed to present their findings at ENDO 2020 in San Francisco this past March, but the COVID-19 pandemic hit and threw everything into disarray. In the months since, White has continued using XRAIT at his hospital, and Center says that her team uses a similar tool. They both say that patients have been mostly impressed with the level of care they’ve received. “The people that we reached out to, who had their fracture treated, gone home, and then we’ve called them up, and said, ‘Hey, your bones might be sort of at risk of having another fracture, let’s assess you, and decide whether you need any treatment for underlying osteoporosis,’” Center says.

White tells Endocrine News that the program almost works too well; those who treat and study osteoporosis see the value in fracture liaison services, which up until now had been underutilized. “Now it’s swamped by the massive numbers,” White says, “about a fourfold increase in the number of patients that we’re identifying, using AI.”

“There is evidence that fracture liaison services result in decreased subsequent fractures,” Center says “So as long as you’re engaging more patients to take treatment, if they’ve got osteoporosis, you will decrease further fractures. There’s evidence for that.”

White has a licensing agreement with Abbott Diagnostics, so anyone interested in implementing XRAIT in their local healthcare system can contact that company to get started. For now, XRAIT only “speaks” English, but other countries can develop their own natural language processing with help from biomedical engineers. From there, physicians will be able to identify more patients at risk for osteoporosis. “The long-term gain is that with adherence, provided there is that adherence to therapy, you should be seeing a decrease in fractures.”

For White, this project is a quality improvement one. He points to medical problems that might get reported but not acted upon, like say, a shadow on the lungs. “Because if a fracture has been reported,” he says, “and it was previously, and it’s shown to be osteoporotic, you have actually haven’t got a leg to stand on if you didn’t respond to it.”

— Bagley is the senior editor of Endocrine News. He wrote the August cover story about new research that links endocrine-disrupting chemicals to cardiovascular disease.