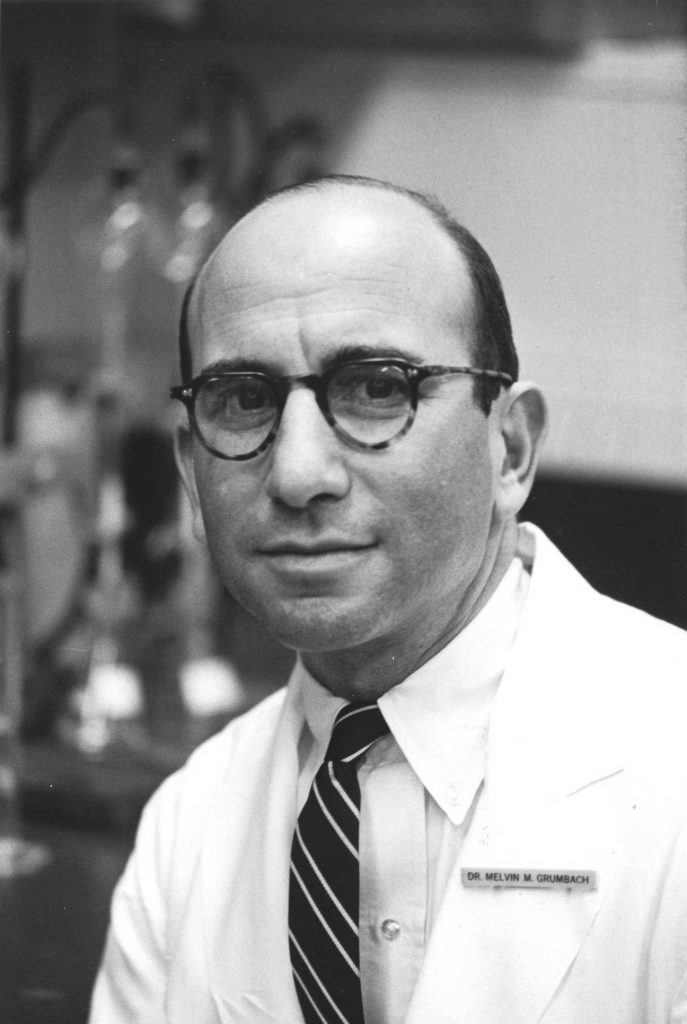 Endocrine Society past-president (1981- 1982) Melvin Malcom Grumbach, MD, known to the world as Mel, passed away October 4, 2016 at the age of 90. Mel was the Edward B. Shaw Professor of Pediatrics, Emeritus, and former chairman of the Department of Pediatrics (1966-86) at the University of California, San Francisco (UCSF), and was a world leader in every phase of pediatrics and endocrinology.

Born Dec. 21, 1925, Mel received his MD from Columbia University in 1948, and after three years of pediatric residency in New York and two years in the US Air Force, joined Lawson Wilkins’ legendary program in pediatric endocrinology at Johns Hopkins University. After two short years and ten publications at Hopkins, Mel returned to Columbia University before moving to University of California – San Francisco as Chair of Pediatrics in 1966, where he morphed a regional clinical program into one of the preeminent academic departments in the country.

Mel always believed that his legacy was not in the papers he wrote or awards he received, but in the people he’s taught.

Mel had a tremendous impact on the specialty of pediatric endocrinology. From 1956 to 1990, he supervised the training 82 fellows from 15 countries on five continents. Of these, 42 became professors, 40 became division chiefs, 14 became department chairs, and two became deans. No single individual trained as many leaders or had a broader impact on pediatric endocrinology.

Mel was known as the world’s foremost pediatric endocrinologist. His early work delineated chromosomal dynamics and chromosomal disorders, then, with the late Dr. Selma Kaplan and his longtime friend Felix Conte, he studied the hormonal basis of sexual differentiation, growth, and puberty in children. His work defined much of our present knowledge of the hypothalamic-pituitary axis and the clinical management of its disorders. Over-all, Mel published 389 research papers, reviews and book chapters.

Mel was a ubiquitous force in academic leadership. He protected the time of young faculty, encouraged them to get grants, and fought for lab space. He was elected President of The Association of Medical School Department Chairs (1973), The Lawson Wilkins Pediatric Endocrine Society (1975), the Western Society for Pediatric Research (1978), the Endocrine Society (1981), and the American Pediatric Society (1989).

Mel’s research, teaching and leadership were widely recognized: he received the Endocrine Society’s Fred Conrad Koch Lifetime Achievement Award Award (1992) its highest award; the Lifetime Achievement Award from the American Academy of Pediatrics (1996); the John Howland Award from the American Pediatric Society (1997), the highest award in American pediatrics and was the first recipient of the Judson J. Van Wyk Prize for career achievement from the Lawson Wilkins Pediatric Endocrine Society (2006). He was elected to the Institute of Medicine (1983), the American Academy of Arts and Sciences (1995) and the National Academy of Sciences (1995); he received honorary doctorates from the University of Geneva (1991), the University of Paris 5 (René Descartes) (2000), and the University of Athens (2008), and was awarded the UCSF Medal in 2010.

Mel always believed that his legacy was not in the papers he wrote or awards he received, but in the people he’s taught. He created a vibrant, dynamic Pediatric Endocrine Program and Department of Pediatrics at UCSF. The staying power of this program speaks volumes for Mel. Beyond UCSF, his training of deans, chairs, and chiefs is unequalled; his influence unmatched; his impact all-pervasive. One cannot write the history of endocrinology or of UCSF without writing of Mel.