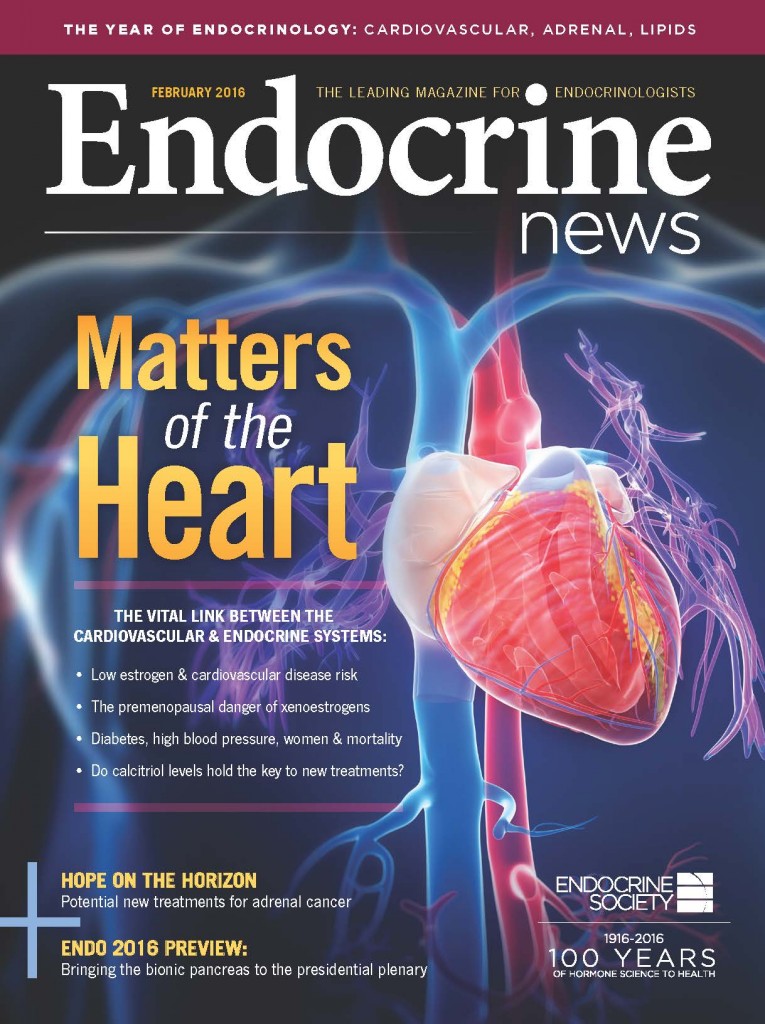 While it’s well known that the endocrine system plays an important role on cardiovascular function, new research from around the world solidly demonstrates the numerous links between hormones and a healthy heart.

The old saying “the way to a [human’s] heart is through the stomach” might be more true than we knew, but not in the sense that good cooking can secure a mate.

As February marks American Heart Month, four recent studies shed new light on just how the endocrine system affects cardiovascular health. Although some studies have greater implications for one sex or the other, one clear theme emerged among three of the four: Diabetes and the factors that predispose to developing diabetes should be targeted to prevent cardiovascular disease development among at-risk patients. The fourth study may offer clues for how to tailor cardiovascular disease treatment once prevention is no longer an option.

Using a physiological model of selective induced hypogonadism that blocked the natural conversion of some amounts of testosterone to estrogen with the drug anastrozole, researchers sought to “investigate the relative contributions of gonadal steroids on cardiometabolic risk factors,” Yu says.

They found that the resulting higher levels of testosterone reduced levels of high-density lipoprotein (HDL) “good” cholesterol, whereas the correspondingly lower levels of estrogen resulted in higher fasting blood glucose levels, worsening insulin resistance, and accumulation of body fat, which are markers for diabetes — a significant risk factor for heart disease. “On the other hand,” Yu adds, “low testosterone levels led to significant increases in HDL cholesterol and leptin, irrespective of estrogen levels.”

“…Age-related declines in estrogen and testosterone may directly impact metabolic risk in men, although the implications for overall cardiovascular risk are uncertain. Even though leptin is made by adipocytes, its circulating level is regulated by androgens in men.” – Elaine Yu, MD, MSc, assistant professor, Harvard Medical School, Boston, Ma.

Neither sex hormone was shown to regulate low-density lipoprotein (LDL) “bad” cholesterol levels or blood pressure, which are two of the most important predictors of cardiovascular risk.

“These findings suggest that age-related declines in estrogen and testosterone may directly impact metabolic risk in men, although the implications for overall cardiovascular risk are uncertain,” Yu says. “Even though leptin is made by adipocytes, its circulating level is regulated by androgens in men.”

Xenoestrogens May Reverse Effects of Endogenous Estrogen
In “Inflammatory and Cardiometabolic Risk on Obesity: Role of Environmental Xenoestrogens,” published in The Journal of Clinical Endocrinology & Metabolism, Diana Teixeira, PhD, in the Department of Biochemistry at the University of Porto in Portugal, and colleagues proposed that xenoestrogen (environmental pollutants with hormone-like activity present in the environment and in plastics) levels should be considered as biomarkers for cardiometabolic risk, having demonstrated a positive correlation between xenoestrogen levels in abdominal fat and the presence of metabolic syndrome (cluster of at least three of the following symptoms: abdominal obesity, high triglyceride levels, low HDL cholesterol levels, high blood pressure, and high fasting blood sugar) in obese women in previous studies. “The positive association is especially evident in the phase of a woman’s life cycle when estrogen signaling is most evident, before the menopause, proposing that these compounds act through interference with the signaling of endogenous estrogens, decreasing estrogens’ cardiometabolic protective effects,” Teixeira says.

Additionally, other studies have proposed that xenoestrogens in fat can be involved in inflammatory activation/perpetuation, a critical condition for metabolically unhealthy fat, explains Teixeira. “On the other hand, the accumulation of xenoestrogens in abdominal fat is correlated with the increase in the number of monocytes in circulation, a possible intermediate step to their migration to the fat. This reinforces the hypothesis that xenoestrogen exposure, through its effect on the immune system, may contribute to the high rate of metabolic disorders,” she says. Somewhat surprisingly, researchers also found that obese women with higher xenoestrogen levels had more difficulty losing weight such as through bariatric surgery.

To reduce their personal load of these ubiquitous compounds, Teixeira recommends counseling patients about simple lifestyle changes: manage weight; avoid plastics in the handling/storage of foods; change diet to include avoiding high-fat animal foods (insofar as xenoestrogens accumulate along the food chain mostly in the fat tissues of animals) opting for organic foods, avoiding processed and refined foods, and using safe household cleansers
and health and beauty products.

Among the 159,971 subjects who participated in a health screening program between 2002 and 2009, 12.6% had metabolic syndrome at the time of the initial screening. The researchers found that those with metabolic syndrome had a 1.6-fold-increase in cardiovascular mortality compared to those who did not have the condition. Significantly, this difference disappeared when people with diabetes or high blood pressure were excluded from the analysis, Sung explains. Also significant is that women with metabolic syndrome faced a great risk of death from any cause than did men.

“The analysis tells us that diabetes and high blood pressure are significant factors that elevate the risk of death from cardiovascular disease among people with metabolic syndrome,” Sung says.

“…The accumulation of xenoestrogens in abdominal fat is correlated with the increase in the number of monocytes in circulation, a possible intermediate step to their migration to the fat. This reinforces the hypothesis that xenoestrogen exposure, through its effect on the immune system, may contribute to the high rate of metabolic disorders.” – Diana Teixeira, PhD, Department of Biochemistry, University of Porto, Porto, Portugal

Calcitriol/PTH Ratio: A Potential Therapeutic Tool
Also presented at ENDO 2015, “In Chronic Heart Failure, Monitoring Calcitriol and its Ratio to Parathyroid Hormone May Help Prevent Death,” explored the role that 1,25(OH)2D, the biologically active metabolite of vitamin D, and parathyroid hormone (PTH) play in cardiac remodeling and worsening of heart failure in a single-center prospective cohort of 170 male and female patients with chronic heart failure from either ischemia (119) or dilated cardiomyopathy (51).
Researchers including lead study author Damien Gruson, PhD, professor and associated laboratory director in the Department of Laboratory Medicine at Cliniques Universitaires Saint Luc in Brussels, Belgium, found that serum levels of 1,25(OH)2D decreased markedly with increased heart failure severity and that the 1,25(OH)2D to PTH(1-84) ratio was strongly predictive of outcomes. “This ratio can therefore be relevant for the prognosis of heart failure patients but with also the potential additional advantage of providing determinants for therapy guidance and patient monitoring,” Gruson says.

Thus, using this tool to stratify risk of death from cardiovascular disease, the next step to investigate is whether aggressive supplementation with calcitriol and/or PTH blockade can help certain patients.

While obesity and diabetes have long been factors in cardiovascular health, more studies are demonstrating that hormone levels may play a more important role in heart health than previously realized. As these researchers from around the world have shown, great strides have been made to better understand the cardiovascular/endocrine relationship, but no doubt further research will continue to enhance our knowledge of this complicated bond.

— Horvath is a freelance writer based in Baltimore, Md. She wrote about EDCs effects on pregnant women in the October 2015 issue.