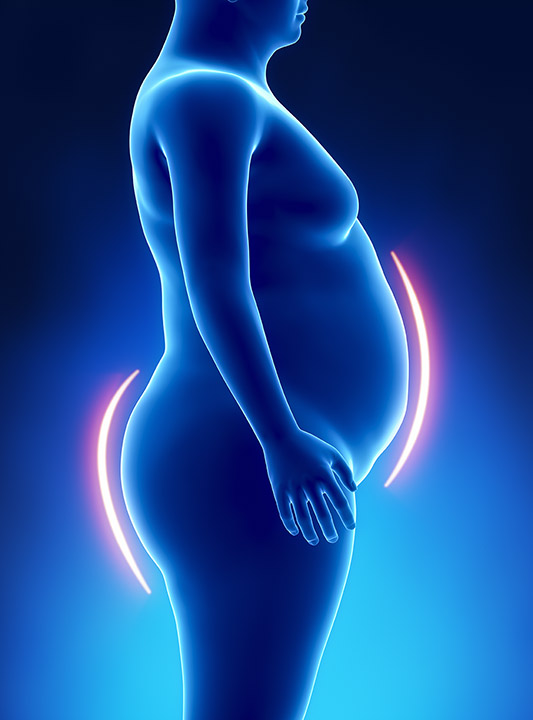 The evidence that bariatric surgery reduces the risk of cancer continues to mount — adding to the reasons that severely obese patients should consider this option for weight loss.

Obesity’s role in raising cancer risk is well-documented. It is implicated in 14% of cancer deaths in men and 20% in women, and appears to be overtaking smoking as the biggest preventable risk factor.

“One in five women’s cancer deaths in the United States could be prevented just by diet and nutrition,” says Susan C. Modesitt, MD, professor and chief of gynecologic oncology at the University of Virginia. “Three out of the four big cancers in terms of incidence for women — breast, uterine, and colorectal cancer — are all obesity-related.”

• Obesity raises the risk of cancer, but weight loss following bariatric surgery can reduce the risk.
• Obesity apparently raises cancer risk by disrupting hormone regulation, causing hyperinsulinemia, and inducing chronic inflammation, all of which are ameliorated by weight loss.
• For people with a BMI of 30 or more, bariatric surgery is the best hope for meaningful weight loss.

Two of the most influential studies indicating bariatric surgery’s role in lowering this risk were published in 2009. A team led by Ted D. Adams of the University of Utah school of medicine found that over 24 years, cancer incidence was 24% lower and cancer mortality 46% lower in a gastric bypass surgery group compared with a severely obese control group. Significant effects were seen in a wide range of cancers, including colorectal, lung, melanoma, breast, ovarian, and non-Hodgkin’s lymphoma. The prospective Swedish Obese Subjects Study found that women who had bariatric surgery had 40% fewer first time cancers over 11 years compared with severely obese matched controls.

“One in five women’s cancer deaths in the United States could be prevented just by diet and nutrition. Three out of the four big cancers in terms of incidence for women—breast, uterine, and colorectal cancer—are all obesity-related.” – Susan C. Modesitt, MD, professor and chief of gynecologic oncology, University of Virginia, Charlottesville, Va.

Precancers Disappear with Weight Loss
Since those studies, the evidence of a beneficial effect has continued to increase. Modesitt was the lead author of a recent study in Gynecologic Oncology that looked at bariatric surgery and endometrial cancer, a cancer strongly linked to obesity. Being 30 pounds overweight increases endometrial cancer risk by three times; being 50 pounds overweight increases the risk by 10 times. The patients in the study had a mean BMI of 51 kg/m2, so were almost 200 pounds overweight. Almost half of the women had already had hysterectomies, probably because of abnormal bleeding caused by hormone disregulation associated with obesity. Of the 30 study participants who still had a uterus, 10% had precancerous endometrial cells.

After surgery, the participants had a mean weight loss of about 100 pounds. In all the women with the precancerous cells, the condition resolved itself. After the weight loss, the cells returned to normal without any treatment. The sample size was too small for drawing conclusions, but the results did give a glimpse of effects at a cellular level.

Three Ways to Raise Cancer Risk
The mechanisms by which obesity increases cancer risk are not entirely understood, but are believed to include disruption of hormone regulation, disruption of insulin homeostasis, and chronic inflammation.
“When you have all that extra fat, you have disregulation of your hormones,” Modesitt says. “Some of your testosterone precursors get converted to estrogen in the fat by aromatase, and everything grows when you have estrogen, like breast tissue and endometrial tissue. For example, the endometrial lining just grows and grows. If something grows long enough, then you can have an error made when a cell is replicating, and it becomes precancerous and then becomes a cancer.”

“The cancers that are hormonally sensitive include breast, uterine, and ovarian, and to some degree, probably prostate,” says John M. Morton, MD, MPH, chief of bariatric and minimally invasive surgery at Stanford University School of Medicine. Stanford, Calif.
Morton adds that obese patients “almost always have insulin resistance and hyperinsulinemia.” Insulin is a growth factor — and hyperinsulinemia leads to increased production of insulin-like growth factors — contributing another mechanism for cell proliferation and potential cancer growth.

Obesity also leads to a chronic inflammatory state that disrupts the body’s defenses.

“We live with little cancers in our bodies our entire lives and they never grow up to be anything because of our immune system,” Morton says. “The immune system is working overtime when it comes to adipose tissue inflammation. If your immune system is preoccupied with fat cells, then it won’t do as good a job with the small nascent cancers.”

And when obese patients do develop cancer, they are at greater mortality risk. They tend to be diagnosed later in the disease, at least in part because they receive fewer preventive measures such as colonoscopies and pap smears. “The other reason that obese patients are at more risk from cancer mortality is that it is more difficult to provide treatment for them. Chemotherapy doesn’t work as well and it needs to be redosed. Performing surgery can be harder as well,” Morton says.

Weight Loss Decreases Risk Factors
Weight loss improves all of the risk factors — Modesitt’s paper is one of a host of studies that confirmed this by measuring improvements in patients’ glucose homeostasis, insulin responsiveness, inflammation, and hormone milieu. A patient benefits whether the weight loss is induced by surgery or by diet and exercise, but most severely obese patients have little success with lifestyle changes. “If you look at long-term studies looking at diet, they don’t work very well once you get to a BMI over 30. In fact, they fail about 95% of the time,” Morton says.

“I would always be a huge proponent of diet and exercise first, but if that fails, bariatric surgery is something to consider,” Modesitt says. “If a woman weighs 350 pounds, trying to lose it is really difficult. At that size, they have real difficulty exercising, and we are asking them to do something that they have never been able to do. So it really is a recipe for failure. Diet and exercise work, absolutely; but nobody that obese seems to be able to do it.”

Patient Decisions
John Scott, MD, a bariatric surgeon with Greenville Health System in Greenville, S.C., says that lowering cancer risk can be an important factor in a patient’s decision to have surgery: “I tell my patients up front that obesity is associated with increased cancer rates. But an eye-opening thing that we have discovered over the past ten years is that with bariatric surgery we have the ability to help people reduce their risk for getting cancer by helping them with weight loss. If you are able to reduce the oxidative stress on your body caused by obesity, the evidence shows that cancer rates are going to be lower.”

“It is extremely difficult to lose large amounts of weight and maintain it without surgery, but only about 1% of the people who would be eligible for this type of therapy are actually getting it. The health benefits are so great that we really need to provide access to it for everyone.” – Peter Hallowell, MD, bariatric surgeon, University of Virginia, Charlottesville, Va.

He says patients do not take the decision lightly because surgery “is a life-altering procedure that is going to dramatically change their lifestyle, the way they approach food and physical activity, and all the different things in their life. I think that the three biggest things that attract them to it are the effect on diabetes, the decreased risk of cardiovascular incidents such as heart attacks and strokes, and cancer risk. When you can tell them, this is something that you can do to decrease your risk and increase your chances of living longer and living healthier, that is a powerful argument for someone who is unsure or on the fence about proceeding with surgery.”

Morton says that reducing cancer risk seems to be a particularly important consideration for patients who have survived cancer and want to minimize the chance of recurrence.

“Losing weight for people who are morbidly obese has so many positive health benefits that we really need to look at expanding access to bariatric surgery,” says Peter Hallowell, MD, a bariatric surgeon at the University of Virginia who collaborated with Modesitt on the endometrial cancer study. “It is extremely difficult to lose large amounts of weight and maintain it without surgery, but only about 1% of the people who would be eligible for this type of therapy are actually getting it. The health benefits are so great that we really need to provide access to it for everyone.”

— Seaborg is a freelance writer based in Charlottesville, Va. He wrote about how biotin could affect thyroid tests in the January issue.