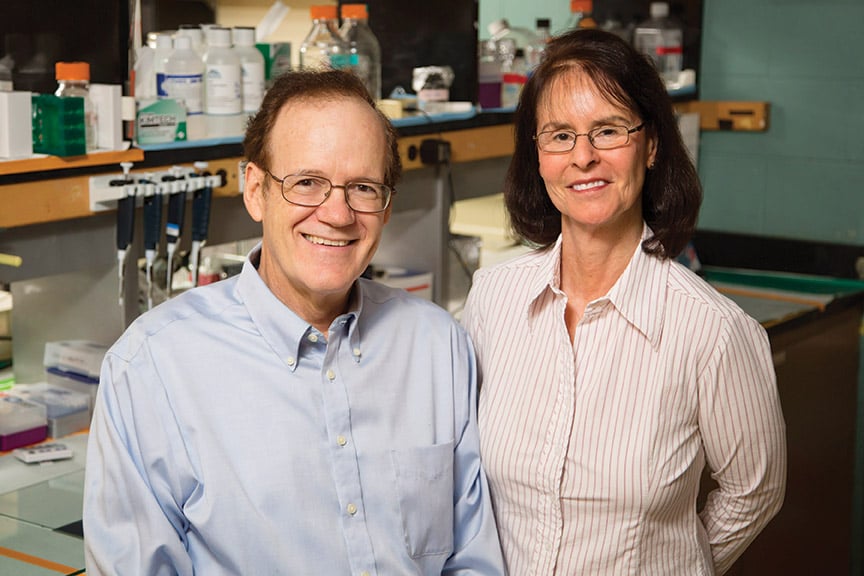 John and Benita Katzenellenbogen, PhDs, are partners in both life and in the lab. Endocrine News asked this award-winning couple about their careers, their research, and, of course, how they met.

For the first time in history, the Endocrine Society’s 2016 Fred Conrad Koch Lifetime Achievement Award was awarded to a married couple, Benita and John Katzenellenbogen, PhDs — both researchers at the University of Illinois. The pair has spent 40 years as partners in both science and life, during which they have vastly expanded our knowledge of steroid hormones and receptors.

The Katzenellenbogens began collaborating during their graduate studies at Harvard. Since then, they’ve built decorated careers through both independent and joint projects. The couple shared the stories behind their success with Endocrine News, in addition to some of their goals for the future.

EN: When did you two first start collaborating? How do you balance your collaborations with your independent projects?

Benita: John and I collaborate when cross-disciplinary chemical and biological expertise benefit the project. Early on, the use of affinity labels for the estrogen receptor (ER) made in John’s lab enabled us to characterize the size, half-life, and dynamics of estrogen receptors in a variety of target cells before the receptor was cloned. We were also able to utilize ligands highly selective for ERα or ERβ to find the distinct biologies mediated by these two receptors.

More recently, we’ve examined extranuclear and nuclear initiated actions of ERs and their beneficial tissue-selective actions with probes made in John’s lab. We’ve learned a great deal by providing these reagents to other labs worldwide as well.

John: When we were graduate students at Harvard, I’d suggest chemical tricks that could help Benita’s research in biology. We began more serious collaboration after she finished her postdoc and became a faculty member at Illinois, and we’ve worked together on various projects ever since.

EN: Which projects do you think have shaped your careers the most, and why?

Benita: A formative part of our careers has been our research on fundamental aspects of structure-function relationships and mechanisms of action of the steroid hormone receptors — especially estrogen receptors ERα and ERβ.

I also have a longstanding interest in the molecular basis of action of SERMs, such as tamoxifen and raloxifene, in breast cancer treatment and prevention. We’ve been trying to understand the changes in breast cancers that make them less responsive to endocrine treatments in hopes of restoring sensitivity to these generally well-tolerated agents.

A particularly exciting aspect of my work took off in the early 1990s while researching structure-activity relationships in the estrogen receptor by both random and site-directed mutagenesis. In this way, my lab identified amino acids and regions critical for hormone binding and for transactivation. We also identified and characterized some constitutively active estrogen receptors that are now being found in a large proportion of patients with ER-containing metastatic breast cancers exhibiting endocrine therapy-resistant disease. We hope our findings will enable better treatments for such patients.

John: Working together on the first really effective affinity label for the estrogen receptor, tamoxifen aziridine, allowed us to gather some of the first information on the residues in contact with the ligand even before any structural information was available.

When the receptor was cloned, we worked together to probe how different ligands bound to the receptor. And for some time, we have been engaged in a series of studies to develop ligands that are selective for the receptor subtypes and that have beneficial patterns of selectivity for various diseases.

I’ve also worked on developing of fluorine-18 labeled steroids to image estrogen, progesterone, and androgen receptors through positron emission tomography (PET) in both breast and prostate cancers. These PET imaging agents will hopefully improve staging and characterizing of the endocrine sensitivity of these cancers, and also assist in the development of new therapy agents.

EN: What are you currently working on? And where do you see your research heading in the future?

Benita: I’m interested in understanding molecular and cellular aspects that underlie endocrine resistance. We also have a great interest in endometriosis, including the design of novel ligands to find new therapeutic approaches.

John: We just completed a study of how these novel ligands have beneficial effects in an animal model of endometriosis. We’re also currently investigating novel ligands to inhibit some forms of the receptor found in recurrent metastatic breast cancer — cases that are resistant to the usual antiestrogens because they have activating mutations.

EN: What advice do you have for aspiring researchers? Any advice on working with a spouse or on collaborating in general?

Benita: Choose a research area that really excites you and has important questions that need answers. The life of a researcher has many challenges, but I’ve found my research enjoyable and meaningful because it may have a beneficial impact on people. The combination of research with training and teaching has made for a fulfilling career.

Collaborations with many other scientists throughout the world, including those with my husband’s research group, have enabled my lab’s science to move ahead in multifaceted and fruitful ways.

John: When you’re starting out, look for something that’s new and different from the studies during your training, and then choose an intriguing topic to which you may offer special insight and make a unique contribution.

The scope of research in endocrinology and biomedical science is enormous. The field benefits from diverse subfields and contributions from a whole array of technologies. Good collaborations occur when both parties share an interest but bring different strengths to the problem, which enables you to do far more than you could on your own. This way, both parties benefit and receive recognition.

Having a spouse as a collaborator has definite advantages, though it can be difficult to get away from work discussions!

EN: How do you feel about receiving the Fred Conrad Koch Lifetime Achievement Award?

Benita: This recognition is a huge honor. We’re especially thankful to our trainees past and present. It has been a great source of happiness for us to see them go on to lead their own successful and independent careers.

John: This is the highest honor that I can imagine receiving, and I am extremely delighted to share it with Benita.

— Mapes is a Washington, D.C.-based freelance writer and a regular contributor to Endocrine News. She wrote about the artificial pancreas at the presidential plenary at ENDO 2016 in the February issue.

John and Benita took different paths to the field of endocrinology, which allowed them to contribute unique skillsets to their research. Benita found herself drawn to the powerful actions of hormones during her doctoral studies with Fotis Kafatos, PhD, so she decided to pursue a postdoctoral spot in the famed lab of the late Jack Gorski, PhD, at the University of Illinois.

While she investigated estrogen actions in the uterus, John also became one of Gorski’s mentees — figuring out how to apply his training with Nobel Prize winner E. J. Corey, PhD, in synthetic organic chemistry and natural products synthesis to biological problems. With Gorski’s encouragement, he began developing chemical tools to study nuclear hormone receptors, starting with affinity labeling reagents that could tag estrogen receptors through covalent bonds.

And thus, under the shared guidance of Jack Gorski, the pair launched a lifetime of achievement together.