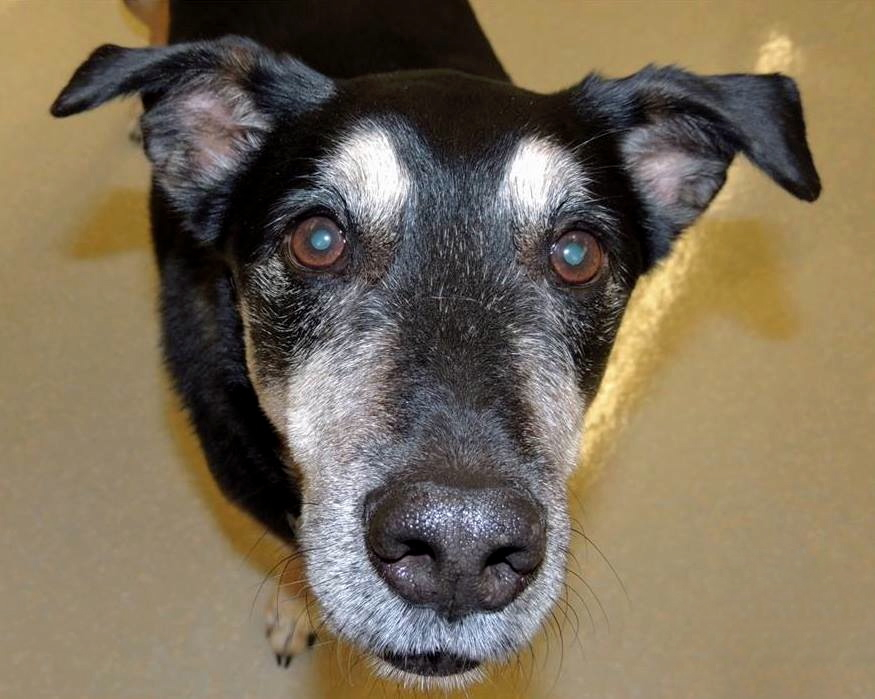 Much cheaper, less invasive, and whole lot cuter than a fine-needle aspiration biopsy, thyroid cancer-sniffing dogs have a remarkable success rate. But will the medical community — as well as patients — accept these canine diagnosticians?

They spotted him wandering around the parking lot of local shopping center. The stray German Shepherd mix was in poor health and searching for food when Arny Ferrando, PhD, and his wife enticed him with a treat to jump in their opened car door.

But Ferrando, a professor at the Center for Translational Research in Aging and Longevity at the University of Arkansas for Medical Sciences (UAMS) in Little Rock, says that he, not “Frankie,” was the lucky one that day.

“I was quite fortunate because I just bonded with him and he turned out to be a wonderful working dog,” he says, after utilizing Frankie as a search and rescue dog. Fast forward five years and Frankie, now about eight, is the first dog trained to detect thyroid cancer with a sniff of his nose.

“Being a search and rescue dog meant that he already understood looking for a scent and signaling when he found it,” Ferrando says. “It was just a matter of changing the scent for him. So training to signal for thyroid cancer just took a few months.”

Ferrando and his colleagues at UAMS presented their pilot study at ENDO 2015 in San Diego that showcased Frankie’s diagnostic skills.

Before the pilot test, Frankie was imprinted with urine, blood, and thyroid tissue obtained from several different patients with metastatic thyroid carcinoma. He was then trained over six months to decipher between urine from thyroid cancer patients and those without cancer. Then, in a first-of-its-kind project, he was asked to “diagnose” the presence or absence of cancer in the urine of 34 patients who initially presented to UAMS with ≥ 1 thyroid nodule(s).

Frankie’s cues were simple: lay down if it’s cancer. Turn away if it’s benign.

The use of dogs like Frankie to detect thyroid cancer could make a big impact on the medical community by relieving patients of the burden of uncomfortable and expensive diagnostic tests, Ferrando says.

Elizabeth Pearce, MD, a thyroid specialist at Boston Medical Center, agreed with the potential. “This study is highly novel, and the concept of a noninvasive, rapid, inexpensive test is quite appealing and might be of particular use on low-resource settings,” she says.

“The reported sensitivity and specificity are fairly robust relative to fine needle aspiration biopsy,” she adds. “We routinely make use of dog’s olfactory prowess in other potentially life-and-death situations, for example, bomb-sniffing, so I don’t think that the eventual use of this testing is beyond the realm of possibility.”

The Standard Diagnosis
Cancer of the thyroid starts as a nodule on the gland. When a nodule is detected, fine needle aspiration biopsy is typically done to rule out cancer. Sometimes the nodule is removed during surgery and then tested. And although thyroid nodules are very common, only about 5% are cancerous, according to the Endocrine Society.

“By 2020, thyroid cancer will be one of the four leading cancers in the country, but it’s very hard to diagnose for a whole number of reasons,” Ferrando says. “This is why (co-researcher) Dr. Bodenner had the intestinal fortitude to say let’s give this a shot.”

“Dr. Bodenner has been at this for 25 years and no matter how good he is, he’s sometimes stuck telling his patients ‘look, we don’t really have a diagnosis but you have 5% chance of cancer.’”

“We routinely make use of dog’s olfactory prowess in other potentially life-and-death situations, for example, bomb-sniffing, so I don’t think that the eventual use of this testing is beyond the realm of possibility.” — Elizabeth Pearce, MD, thyroid specialist, Boston Medical Center, Boston, Mass.

“Now I would take the 95% and run with it,” Ferrando continues. “But a lot of people don’t see it that way and schedule surgery, and for of all those people who elect to have the surgery, 90% of them didn’t need it. And that’s all because of the methodologies and our inability to accurately diagnose.”

Pearce cautions, though, that there are a number of obstacles to implementing dogs to diagnose the disease.

“First, larger studies are needed,” she explains. “In order to scale this up to make it widely available, many dogs would need to be trained and standardization might be a challenge. We also don’t know what substance the dog is actually detecting, and in the absence of a mechanistic understanding it is unclear whether this would work to detect non-papillary thyroid malignancies, and whether the presence of non-thyroidal cancers or other conditions would interfere with results.”

Enter the College of Veterinary Medicine at Auburn University, Auburn, Ala., and a partnership with the team led by Paul Waggoner, MD, co-director of the Canine Performance Sciences Program.

Auburn’s program focuses on enhancing the use of dogs for detection. It breeds what’s called the Vapor Wake dog — a patented technology of Auburn.

The partnership with UAMS is the program’s first venture into the detection of cancer. Three more dogs, all Labrador Retrievers, have been trained and are now doing blind testing with Ferrando’s lab.

“To be sure the dogs are doing what you say they can do, this multisite kind of approach is useful because it’s unlikely that we would essentially be fooled into something else that the dogs are under control of, and we have no idea. We didn’t collect the samples, we didn’t mess with them, it would just be sent to us from some independent place,” he continues.

A Whiff of More than Thyroid Cancer
While Frankie was the first dog to detect thyroid cancer, other canines have long been at work detecting a myriad of other cancers and diseases.

A team of French researchers published work in 2011 in European Urology about their Belgian Malinois shepherd who correctly designated prostate cancer samples in 30 of 33 cases. Of the three wrongly classified as cancer, one patient was re-biopsied and prostate cancer was diagnosed. The sensitivity and specificity were both 91%.

“This approach has surprised and challenged the medical community,” says co-author Geraldine Cancel-Tassin, PhD, of Hôpital Pitié-Salpêtrière in Paris. “But since the publication of our study, other teams have confirmed this experimentation and dogs were shown to be able to detect several other cancers such as bladder, lung, melanoma, and ovarian using urine or breath from patients and controls.”

So exactly what do the dogs smell?

The human body emits hundreds of volatile organic compounds (VOCs) and the main sources are breath, blood, skin, and urine. The components of VOCs usually reflect a person’s metabolic condition and are now being used as diagnostic olfactory biomarkers. Past research has shown, for example, that the breath of a person with diabetes has a rotten apple or acetone-like odor.

Waggoner says the work of analyzing VOCs in urine is ongoing. “In a diseased state, we have to understand what happens at the cellular level that is producing these organic compounds that are emitted,” he says. “Then the dog can be used in conjunction with other instrumentation to try to figure out the unique characteristics of cancer or any disease.”

As the research continues, Pearce points to another hurdle to canine diagnosis: patient acceptance. “I can’t quite envision saying ‘Fido here will have a sniff and we’ll get back to you,’ given the novelty of this testing approach.”

Glenda Fauntleroy is a freelance writer based in Carmel, Ind. She wrote about pay disparities between male and female endocrinologists in the September 2015 issue. 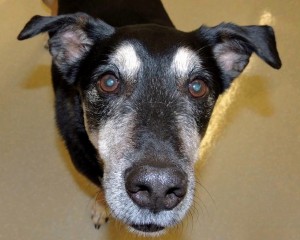 Best Part of the Day: Going to work at UAMS with Dad (“It’s the best deal going. All I have to do is sniff human pee and tell him if I find the cancer smell, and he gives me a treat!”)

To learn more about the potential of scent-trained dogs or to become a contributor, visit www.thefrankiefoundation.org.