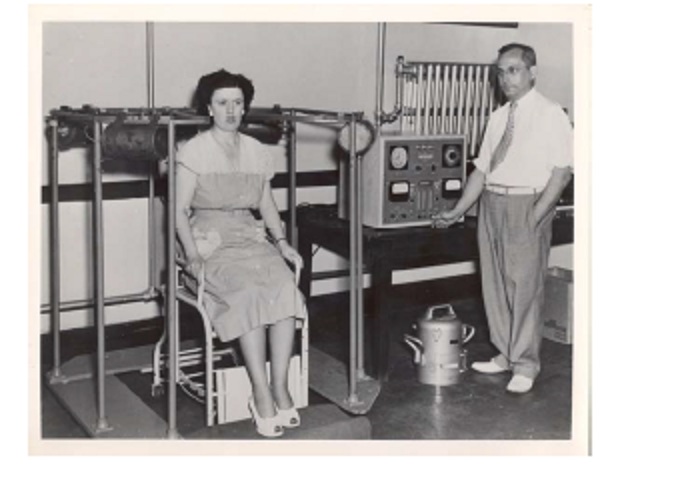 The history of the treating the thyroid with radioiodine is, in a word, colorful. There is no doubt that this single element changed the way patients are treated and diseases are diagnosed, but its long history is fraught with battles in labs, universities, prestigious medical journals, and even World War II.

In November 1936, Saul Hertz, the director of the Thyroid Clinic (1931 – 1934) at Massachusetts General Hospital in Boston, sat across town in a luncheon meeting at Harvard Medical School, listening to Massachusetts Institute of Technology president Karl Compton describe “What Physics Can Do for Biology and Medicine.” Hertz, who had been studying iodine’s effects on the thyroid, spontaneously asked Compton whether iodine could be made radioactive, his goal being to use this theoretical radioactive iodine to treat hyperthyroidism. Compton responded about a month later by letter, writing that iodine could indeed be made radioactive.

In order for this to work, it would take the combined efforts of physicians and physicists, so Hertz and his boss at MGH, J. Howard Means, teamed up with MIT physicists Robley Evans and Arthur Roberts, and by 1938 Hertz and Roberts began conducting studies with iodine 128 (I-128) on rabbits, showing that the rabbits’ thyroid glands rapidly took up I-128, and thus a tracer was born. However, as Clark T. Sawin and David V. Becker wrote in their paper “Radioiodine and the Treatment of Hyperthyroidism: The Early History,” published in the journal Thyroid in 1997, there was no hope of using I-128 as a treatment for hyperthyroidism because of I-128’s 25-minute half-life.

Around this time, across the country at the University of California, Berkeley, Joseph Hamilton and Mayo Soley, who were also conducting rabbit studies using radioiodine (the Boston and Berkeley groups shared their findings with each other), were able to create I-130 and then I-131 using a cyclotron — synthesized by Glenn Seaborg and Jack Livingood at Hamilton’s request — with half-lives of 12 hours and eight days, respectively. In 1940, the Berkeley group confirmed that the human thyroid gland took up radioiodine, and the next year, the Boston group (with their brand-new cyclotron) was able to create these new radioactive iodines and used a mixture of I-130 and I-131 to treat patients with hyperthyroidism. Hertz administered this therapeutic treatment to the first human patient at MGH in January of 1941, making this year the 75th anniversary of using a radioactive material to treat a patient – the birth of nuclear medicine.

“A Complicated Bit of History”

Radioactive iodine is, of course, one of the great medical advancements of the past century. It’s used to not only treat hyperthyroidism due to hyperfunctioning thyroid nodules, but Graves’ disease and thyroid cancer as well. “Tens of thousands of patients have been treated satisfactorily for hyperthyroidism since Hertz’s discovery,” says Leonard Wartofsky, MD, MACP, a professor of medicine at Georgetown University, editor-in-chief of Endocrine Reviews, and an expert on the thyroid. “It’s a very important therapy,” he says. “It’s avoided a lot of surgery, and a lot of the complications from those surgeries have been avoided.”

Radioactive iodine is also a useful diagnostic tool for scanning and measuring the function of the thyroid. It can tell physicians how well the gland is functioning or to show them the anatomy and structure of the thyroid, and whether there are nodules present. Radioiodine is even used at the bench; chemists use it to develop radioimmunoassays.

“Tens of thousands of patients have been treated satisfactorily for hyperthyroidism since Hertz’s discovery. It’s a very important therapy. It’s avoided a lot of surgery, and a lot of the complications from those surgeries have been avoided.”  — Leonard Wartofsky, MD, MACP, professor of medicine, Georgetown University; editor-in-chief, Endocrine Reviews

Hundreds of thousands of thyroid cancer patients have been treated using Hertz’s brainchild. M. Sara Rosenthal, PhD, a professor of bioethics at the University of Kentucky, founder of endocrineethicsblog.org, and a thyroid cancer survivor, says that Hertz’s original inquiry into the uses of radioactive iodine led to a novel, well-tolerated, unique systemic treatment for iodine-avid thyroid cancer. “Generally the side-effects are low,” she says. “Overall, radioactive iodine therapy is less risky than taking Aspirin.”

And yet, while the discovery of radioactive iodine and the subsequent therapies born out of Hertz’s seminal question to Compton 80 years ago have helped thousands of patients suffering from thyroid diseases, the full story is anything but simple and rosy, and it leads to the falling out of two of the major players involved.

“It was a very complicated bit of history,” Wartofsky says.

From Bench to Battleship

By 1941, Hertz had advanced his research and he was administering I-130 to patients at MGH to treat hyperthyroid patients, and over time, he gathered a series of almost 30 patients. Meanwhile, Hitler was advancing through Europe, so Hertz joined the Navy and was shipped off to World War II in 1943.

Hertz was working with a physician named Earle M. Chapman at this time, a private practice doctor who treated Beacon Hill-style, affluent patients, but still managed to carry on clinical research, and worked part-time at MGH. Chapman was ineligible for military duty because of an injury he had sustained in high school, so before Hertz shipped out, he asked Chapman to continue his research.

“[Chapman] was probably honored to get involved in some clinical research and take on these patients,” Wartofsky says. “But when Hertz came back from the Navy two years later, it looks like he didn’t want to give it up, and they had a lot of arguments, and they had a rift and weren’t really talking to each other.”

Their argument, it seems, stemmed from their disagreement over the correct course of treatment with radioiodine therapy. Hertz used lower doses and followed it with stable iodine, while Chapman was more aggressive, using higher doses without stable iodine. Sawin and Becker also write that they disagreed over “who was in charge” and it “led to their falling out.”

“After Hertz’s release from the Navy he was not permitted to return to the MGH and became quite bitter,” Sawin and Becker write. “Chapman stayed on at the MGH. After the war was over, both had acquired a sufficient number of patients — there was then no such thing as a controlled trial — and wrote up the results for publication.”

Here’s where the plot thickens. Chapman wrote his paper first, and sent it to the Journal of the American Medical Association (JAMA) to be published. But the paper was too long and was sent back to Chapman for revisions. Hertz got wind of this, and he rushed to finish his paper.  “Although the editor of JAMA was puzzled by two papers on the same topic from the same institution,” Sawin and Becker write, “both papers appeared in the same issue of JAMA on May 11, 1946, and announced the new therapy was effective treatment for hyperthyroidism.”

This is a tale that is, unfortunately, not all that uncommon in medicine. “The Hertz story is a medical history ‘archetype’ that is far more universal than unique,” Rosenthal says.

“People have big egos,” Wartofsky says. “They want to publish first; they want to get the credit for stuff. And if they can scoop someone else who’s working on the same thing, by all means they will.”

Wartofsky, who previously was also the editor-in-chief of the Journal of Clinical Endocrinology & Metabolism, tells of how during his tenure on that journal, he received two papers on the same topic at almost the same time. The first one made it through the review process quickly and went to publication while the second one required revisions.  The author of the second one was angered, withdrew his paper from consideration and sent it to another journal that had a quicker turnaround time to get it in print. So actually, his paper came out first, and now, when the topic of the two papers is mentioned, he cites his work as having shown it first.”

“That’s the side of investigation that’s not very flattering,” Wartofsky says.

Unflattering and, again, not uncommon. The old saying goes that nothing great ever comes easy, and it holds true for this story as well. Despite the egos and arguments, the alleged backstabbings and betrayals, Hitler and World War II, radioactive iodine has become the gold standard in thyroid disease diagnosis and treatment. Radioactive iodine has saved millions of lives and qualities of lives, and it’s all due to a single question from a promising young physician.

UPDATE: A previous version of this story implied that Joe Hamilton and Mayo Soley discovered iodine 131. In fact, I-131 was synthesized by Glenn Seaborg and Jack Livingood at Hamilton’s request. We regret the error.

Bagley is the associate editor of Endocrine News. He wrote about treating diabetes in HIV/patients in the November issue.

Saul Hertz, sadly, had a relatively short career. He died at age 45, and did not have much time to teach students and pass his findings and techniques on to them.

His daughter, Barbara Hertz, has been on a mission to bring more awareness to her dad’s story and legacy. “You have to think of the courage and the fortitude that my dad must have had to move this forward and to make this a reality,” Barbara says.

Barbara was instrumental in getting her father’s work displayed at the Endocrine Society’s 85th annual meeting in Philadelphia in 2003. His patient data charts were featured as part of Adolph Friedman and Chip Ridgway’s Society history project. “That was the beginning of my exposure of the significance of his work,” Barbara says.

More recently, in 2012 on the 75th anniversary of Hertz’s groundbreaking question, Barbara was able to display and celebrate her father’s work in Vanderbilt Hall at Harvard Medical School, the very building where that spontaneous, seminal idea occurred to him. She’s also worked with physicians and researchers from MIT, MGH, Beth Israel Hospital, and others to launch the website saulhertzmd.com.

Barbara says that the main thing she wants people to know is that her father had these challenges, but he went on and did what he needed to do for medical science. “The product of his research has had a profound and lasting legacy,” she says.