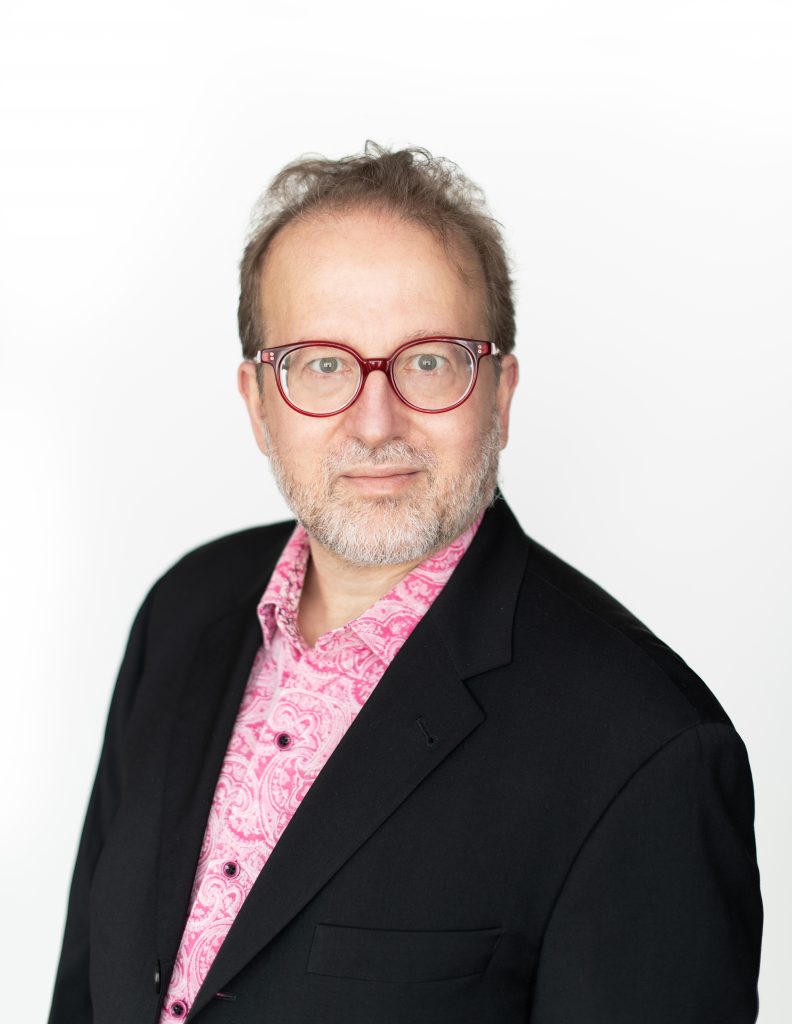 David A. Katz, PhD, CSO of Sparrow Pharmaceuticals, launched the company to specifically target the therapies bigger companies were ignoring. He talks to Endocrine News about these new therapies and how they could possibly change the way people with Cushing’s syndrome, autonomous cortisol syndrome, and other disorders are treated.

For many endocrine researchers, their career path typically takes them to a lab at an academic institution or a research facility. However, there is another path for those scientists who posses an entrepreneurial spirit – industry.

To encourage its members who want to pursue the entrepreneurial route, the Endocrine Society has created the Entrepreneurship Special Interest Group (SIG), that provides an online community where members can meet and connect with other likeminded endocrinologists to discuss and share ideas, best practices, and more.

One of the benefits of these SIGs is a series of webinars and other networking events where experts in the field share their knowledge and expertise. One recent Entrepreneurship SIG event was entitled “Pitching Your Idea Effectively” hosted by David Katz, PhD, chief scientific officer and founder, Sparrow Pharmaceuticals, Portland, Oregon, and Christopher Adams, MD, professor of medicine and research chair at the Mayo Clinic, in Rochester, Minn., and president of Emmyon, Inc.

However, going into the business realm in no way means that these researchers abandon their duties in the laboratory. In fact, prior to founding Sparrow, Katz was a pharmaceutical R&D leader at Abbott and AbbVie, where he led clinical development and drug discovery teams. Dedicated to mentorship of the next generation of life sciences entrepreneurs, Katz is currently an entrepreneur-in-residence at Oregon Health & Science University and has held post-doctoral fellowships in immunology at both the Universities of Chicago and Michigan; earned MPhil and PhD degrees in molecular biophysics and biochemistry from Yale University; and is an alumnus of Pomona College (BA, chemistry).

With more than 50 peer-reviewed scientific papers to his name, Katz has recently turned his attention to potential new treatments for Cushing’s syndrome and related disorders since many of the current therapies are not always effective. Endocrine News speaks with Katz, who believes that drugs now in clinical trials could change current therapeutic paradigms by taking new approaches to inhibiting corticosteroid regulation and action.

Endocrine News: What is your background as it relates to your work at Sparrow Pharmaceuticals?

David A. Katz: I was a leader in personalized medicine, drug discovery, and clinical development at Abbott and AbbVie. I used what I learned from that experience to start Sparrow.

EN: Why did you found Sparrow? What was the perceived need you want to meet?

DAK: Large pharmaceutical companies have de-prioritized many early-stage investigational drugs with strong clinical potential. It’s good for patients that companies like Sparrow exist to bring those forward to the market. Excess corticosteroids play a central role in devastating diseases such as Cushing’s syndrome and autonomous cortisol syndrome (ACS), but treatment has been suboptimal. We identified a new approach that we felt larger companies have neglected.

EN: What is that new approach and how might it help solve the puzzle of treating Cushing’s syndrome and ACS?

DAK: SPI-62 is a small molecule that inhibits 11b-hydroxysteroid dehydrogenase type 1 (HSD-1), an intracellular enzyme that converts inactive cortisone to active cortisol. HSD-1 is expressed in a number of tissues (including liver, adipose, bone, brain, skin, muscle, and eye) in which hypercortisolism causes wide-ranging symptoms in patients with Cushing’s or ACS, such as hyperglycemia, dyslipidemia, hypertension, osteopenia, affect, cognition and sleep disorders, impaired wound healing, sarcopenia, and glaucoma.

DAK: A key insight is that most of the intracellular cortisol that can bind intracellular receptors is made by HSD-1; only a small portion comes from the circulation. Pharmacologists think a lot about the free fraction of drugs — the portion not bound to plasma proteins — because that’s the amount available to tissues. We apply that thinking to cortisol and cortisone. Cortisol is about 95% protein-bound in circulation. Even though total cortisol is higher than total cortisone, the relationship is reversed for the free fraction because cortisone is much less protein bound.

More cortisone enters cells, where HSD-1 converts it to cortisol. We and others have published evidence that in the liver, about 90% of intracellular cortisol is made by HSD-1. That proportion might be even higher in patients with Cushing’s or ACS, in whom HSD-1 is overexpressed compared to the general population.

EN: How might inhibiting HSD-1 improve outcomes for patients with Cushing’s or ACS?

DAK: By blocking formation of most of the excess cortisol that has access to intracellular receptors, SPI-62 has potential to attenuate most of the symptoms associated with hypercortisolism in Cushing’s and ACS. That’s certainly the case in rodents — both HSD-1 gene knockout and HSD-1 inhibitors (including SPI-62) prevent or reverse multiple negative effects of exogenously administered corticosteroids including hyperglycemia, dyslipidemia, hypertension, osteopenia, skin atrophy, sarcopenia, glaucoma, anxiety, and cognitive deficits. There’s also the natural experiment of patients with Cushing’s and unusually low HSD-1 activity, who were asymptomatic despite very high UFC.

SPI-62 was associated with reduced hemoglobin A1c, glucose, cholesterol, and triglycerides levels in patients with diabetes. In patients with Cushing’s or ACS, it might show larger effects because cortisol is the primary etiology of their hyperglycemia and dyslipidemia, rather than one factor out of many. But we’re basically at equipoise regarding the relative benefit of HSD-1 inhibition across the domains of Cushing’s and ACS symptoms. We’ll cast a wide net in Phase 2 trials with the aim to figure that out. I’m quite interested to assess whether SPI-62 shows benefits on the affect, cognition, and sleep symptoms that patients with Cushing’s and ACS notice, but which haven’t been studied extensively.

EN: Is there something about corticosteroid excess that most endocrinologists don’t understand? What is the new research that is leading to new treatments?

DAK: UFC to monitor Cushing’s patients could be an incorrect approach. UFC is a biomarker for circulating cortisol, while most of the cortisol with access to intracellular receptors is made by HSD-1. There’s evidence in the literature that UFC normalization doesn’t correlate well with clinical outcomes in patients with Cushing’s. It doesn’t have that essential feature of a surrogate biomarker.

There’s a urinary assay to quantitate hepatic HSD-1 activity and inhibition thereof. In the liver, 5- and 3-steroid reductases metabolize cortisol and cortisone to tetrahydro metabolites that are rapidly excreted in urine. The ratio of cortisol (HSD-1 product) to cortisone (HSD-1 substrate) metabolites reflects the intrahepatocellular levels. The urinary HSD-1 ratio is elevated about 45% in patients with Cushing’s and about 15% in patients with ACS compared with controls. That is consistent with HSD-1 induction by hypercortisolism. The ratio was about 65% lower in asymptomatic patients with Cushing’s compared with a historical patient cohort. In healthy adults and in patients with diabetes, SPI-62 reduced the ratio by 90%. Upcoming clinical trials in Cushing’s and ACS are aimed at assessing SPI-62 effect on HSD-1 activity and exploring how well changes in urinary HSD-1 ratios correlate with clinical outcomes.

EN: What do you see as the future of endocrinology as it relates to understanding the role of corticosteroids?

DAK: The potential of SPI-62, which of course has to be demonstrated through clinical trials, includes a focus shift in Cushing’s from circulating to intracellular cortisol as well as improved recognition of ACS as a prevalent form of hypercortisolism.

In Cushing’s, if we find that SPI-62 substantially reduces symptoms and that the degree of HSD-1 inhibition correlates well with clinical improvement, a new standard-of-care could be to monitor SPI-62 effect with the urinary HSD-1 ratio. That’s readily obtained from spot urine samples, which means no more 24-hour collections! We hypothesize that under HSD-1 inhibition the residual intracellular cortisol from the circulating pool might be a sufficient buffer to prevent adrenal insufficiency, potentially obviating the monitoring and dose titration that are needed with today’s drugs.

ACS might be the most under-recognized condition in endocrinology. Most people don’t undergo the imaging studies that could reveal an adrenal tumor; some tumors might not be documented on studies ordered for unrelated reasons; and most patients with tumors don’t receive endocrinological follow-up. It’s possible that as few as 3% of patients with ACS have been diagnosed. That’s shocking for a condition associated with so much cardiometabolic and bone morbidity; negative effects on affect, cognition, sleep, muscle, and skin; and excess mortality. If SPI-62 development for ACS is successful, availability of a targeted medication for the disease will hopefully raise awareness and improve the diagnosis rate.

EN: What’s the status of the therapeutics you are developing?

DAK: Phase 2 trials of SPI-62 are planned to start by the end of 2021 for Cushing’s and a few months thereafter for ACS.

Seaborg is a freelance writer based in Charlottesville, Va. In the November issue, he discussed insulin’s intriguing future.

Fever Pitch: How to Sell Your Own Ideas

As part of the Endocrine Society’s Entrepreneurship Special Interest Group, David Katz, PhD, and Christopher Adams, MD, professor of medicine and research chair at Mayo Clinic, in Rochester, Minn., and president of Emmyon, Inc., shared their pointers for effective pitch meetings in a webinar entitled “Pitching Your Idea Effectively.”

They discussed methods on you can how to pitch your own entrepreneurial ideas most effectively. Below are a few highlights: