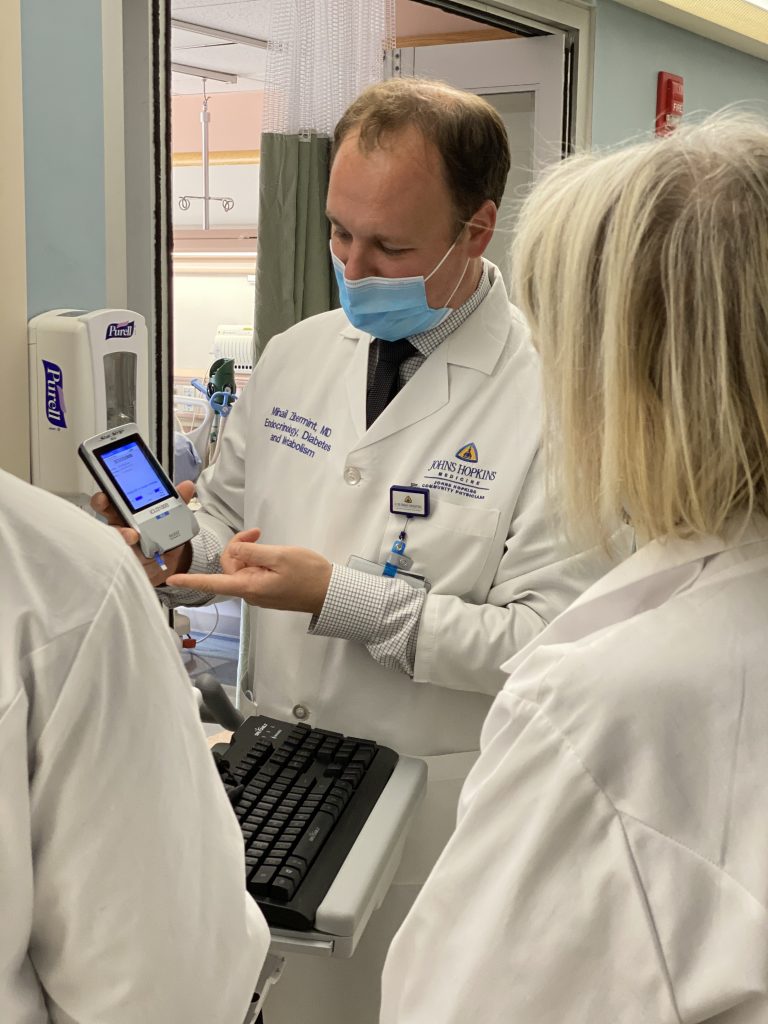 Two recent papers touted the benefits of having an endocrine hospitalist-led Inpatient Diabetes Management Service (IDMS) in a community hospital setting to reduce the rates of both hypoglycemia and hyperglycemia, length of stay, and even hospital costs. Endocrine News gets a firsthand look at a community hospital’s use of an IDMS from both endocrinologists and a patient who experienced the service after a diabetes diagnosis.

In the fall of 2019, a patient presented to the emergency room at Suburban Hospital in Bethesda, Md., with blood sugar levels so high they were moments from slipping into a coma. The patient (who asked to remain anonymous) says they figured they could go home once their glucose was stabilized, but soon found themselves in the intensive care unit – a dizzying and disappointing series of events. The patient says that every time the hospital staff asked what they wanted for breakfast the next morning, it was yet another crushing blow.

The patient’s endocrine physician during their stay was Mihail Zilbermint, MD, a clinical endocrinologist at Suburban, whom the patient refers to as “Dr. Z.” The patient says the first morning they were in the ICU, Zilbermint came to their bedside at about 6:00 am. Still groggy and a bit disoriented, the patient knew they would have a hard time processing what Zilbermint had to say. “He started really talking to me about my diagnosis and treatment, and I said, ‘Dr. Z. This is heavy stuff. Can you do me a favor? Can you come back? Can you let me wake up and come back in an hour?’” the patient says. “And he did. He came back in an hour, we sat down, we had a talk, and he told me exactly who he was hooking me up with.”

In the hospital setting, patients are already in tense, stressful situations, and are usually sleep-deprived. A few minutes at patients’ bedsides each morning is not enough to help them optimally manage a newly diagnosed disease like type 2 diabetes, especially once they are discharged. It would be like expecting someone to be fluent in a new language after a 30-minute lesson.

“Nobody wants to be sick. Nobody wants to have uncontrolled diabetes. It’s just that they’ve lost hope. And offering them hope again is amazing. That is just one of the best feelings in the world to see patients regain excitement and hope over their challenging disease.” – Andrew Demidowich, MD, clinical endocrinologist, Howard County General Hospital, Columbia, Md.

But just a couple years prior, Zilbermint and his team at Suburban, as well as Andrew Demidowich, MD, a chief clinical endocrinologist at Howard County General Hospital in Columbia, Md., and his team there launched hospital-wide initiatives to improve inpatient diabetes care and reduce rates of hyperglycemia and hypoglycemia. Glucose-targeting initiatives had been implemented at academic institutions in the past, but this was the first time something like that had been tried in a community hospital setting.

Two papers appeared recently in the Journal of Diabetes Science and Technology, each with Zilbermint and Demidowich as coauthors. One paper was on how the implementation of an Inpatient Diabetes Management Service (IDMS) was able to tackle hyperglycemia, and the other described multimodal strategies to reduce hypoglycemia in the community hospital setting (at Howard County General and Suburban, respectively – both part of the Johns Hopkins Health System). “[The IDMS] model of care has been shown to reduce rates of hyper- and hypoglycemia, hospital length of stay (LOS), and associated hospital costs,” the authors write, “However, few studies to date have evaluated the implementation of a dedicated IDMS in a community hospital setting.”

Community hospitals make up about 85% of the hospitals in the U.S. and they account for almost 95% of all hospital admissions. Meanwhile, the authors point out that cost of diabetes is currently accounting for almost $250 billion — one in four healthcare dollars spent in the U.S. “It is estimated that hypoglycemia may add 31% to the overall cost for an inpatient stay, with the average cost of $4,312 per admission. As a result, maintaining glycemic control in inpatient settings has received amplified consideration over the past few decades,” they write.

Both papers conclude that implementation of IDMS significantly reduced rates of hyperglycemia and hypoglycemia, a boon not just for the patients and their clinical care teams, but possibly for the hospital system’s bottom line.

“You really get experts from all areas of the hospital looking at the problem together, which is nice because everyone can kind of give their input and you don’t need to be like, ‘Well, I don’t know the answer.’ You have somebody in the room who knows the answer, so you make progress much more rapidly.” – Andrew Demidowich, MD, clinical endocrinologist, Howard County General Hospital, Columbia, Md.

For Demidowich, this team approach works for the day-to-day management of a particular patient, but it can also be used to address systemic problems in the hospital itself. By implementing an IDMS and creating a hospital Glucose Steering Committee, which meets monthly, “You get experts from all areas of the hospital looking at the problem together, which is nice because everyone can give their input in real time. Rarely anymore do we say, ‘Well, I don’t know the answer,’” Demidowich says. “You have somebody in the room who knows the answer, so you make progress much more rapidly.” This teamwork has enabled an update to the hospital DKA protocol, hypoglycemia policy, nursing education, and even the creation of a community diabetes support group.

These specialized inpatient diabetes teams consist of endocrine hospitalists (endocrinologists), endocrine nurse practitioners, diabetes educators, registered dieticians, pharmacists, and so on. Aside from inpatient care, “the real important thing is getting [patients] home and keeping them home,” Demidowich says. “And that involves other members of the team. So good coordination with case management, social workers, and the Population Health team is essential, to get patients resources that are available to them. It’s important to set them up for success, both in the inpatient hospital setting, but also once they leave.”

Patients and family members have also helped shape diabetes care in the community hospitals. Suburban Hospital is part of Hopkins’ Patient Family Advisory Council and the hospital has a lay person as part of the committee who has a daughter diagnosed with type 1 diabetes. “She’s passionate about diabetes in general,” Zilbermint says. “And she also played a core role in helping revise and establishing this new insulin hypoglycemia treatment protocol.”

Both Zilbermint and Demidowich tell Endocrine News that patient education is incredibly important, but in practice, can be a “mixed bag.” Again, these patients are sick and stressed (they’re in the hospital, after all). They may have trouble accepting the diagnosis or changes to their lifestyles, or they may have very strong needle phobias. “Some patients just flat out say, ‘I’m not doing insulin once I leave the hospital,’” Demidowich says. “And I say, ‘You know what? While that’s not ideal, it’s ok. I’d rather we be honest with each other, and work together to come up with a treatment plan that is doable and works for you.’ I’d rather send someone home on pills that they will actually take, rather than the perfect insulin regimen that they won’t. Don’t let perfection be the enemy of good.”

Zilbermint says he has found success through collaborating with his patients but also helping them focus on one thing at a time – taking the time to listen to their biggest concerns (how to prevent hypoglycemia, for example) and staying on that topic. “The feedback from the patient is very positive,” he says. “Some of the patients told me, ‘Hey, nobody ever taught me how to prevent hypoglycemia.’”

“Nobody wants to be sick. Nobody wants to have uncontrolled diabetes,” Demidowich says. “It’s just that some patients have lost hope. And sometimes providing a little bit of education, reexamining their outpatient regimen, and discussing new treatment and testing options changes their entire outlook. Offering them hope again is amazing. That is just one of the best feelings in the world to see patients regain excitement, hope and control over their challenging disease.”

But implementing initiatives like this at community hospitals nationwide won’t happen overnight. Nothing but pre-fab furniture can be built in a day. A small rural community hospital may simply not have the resources for such an undertaking. But that does not mean there’s nowhere to start.

“If you come to the hospital administration and say we need an endocrinologist and they ask why, we can say that if you don’t make these changes, you’re going to lose $100,000 per month. Then it’s, ‘Oh, okay, tell me more!’” – Mihail “Misha” Zilbermint, MD, chair, Department of Medicine at Suburban Hospital; chief and director of Endocrinology, Diabetes and Metabolism at Suburban Hospital, Bethesda, Md.

Even large changes can be achieved incrementally. It may just involve starting with low-hanging fruit. “These are conversations to have with the hospital administration, to take a look at easy changes to improve care,” Demidowich says. “It’s very doable at any institution. You just have to start somewhere.”

Hospital administrators may even perk up once they see the money that can be saved in the long run by implementing similar initiatives. Laying out hypoglycemia data may not garner much excitement from administrators, but telling them hypoglycemia is costing them $100,000 a month will make those same eyes snap into focus. Zilbermint explains: “If you come to the hospital administration and say we need an endocrinologist and they ask why, we can say that if you don’t make these changes, you’re going to lose $100,000 per month. Then it’s, ‘Oh, okay, tell me more!’”

Almost two years out from their hospitalization for high blood sugar and subsequent diagnosis of type 2 diabetes, Zilbermint’s patient is doing very well. The patient says that within six months of discharge, they were off insulin and down to two metformin pills a day and weekly Trulicity. They credit not only the Suburban staff, but also the outpatient endocrinologist Zilbermint referred them to, as well as their nutritionist for helping them lose 40 pounds (a nutritionist whom the patient says bakes delicious low-carb bread).

Also in the mix was a patient support and education group at Suburban called Thrive365, which holds monthly meetings on numerous topics, from diabetes and nutrition to brain and oral health.

The patient can’t say enough good things about the nursing staff at the hospital, in the ICU, and in the intermediate care unit. “[The nurses] were so patient,” the patient says. “Because you remember with this situation, they’re not only taking care of you, but they’re teaching you how to use stuff. I had to learn how to give myself the insulin, take my blood, all that kind of stuff. It was all very new to me and they wanted to make sure that when I left, I wasn’t totally overwhelmed.”

The patient was discharged on a Friday night, so Saturday morning was their first test at home. “Even though I knew what I was doing, it was overwhelming, but I learned very quickly how to deal with it,” the patient says. “And I’m really thrilled that my case has taken the path that it has and that I don’t have to deal with the insulin shots and that I can just take an oral medication and a Trulicity once a week. I feel fortunate.”

— Bagley is the senior editor of Endocrine News. He wrote the April issue’s cover story about the journey of Nobel Prize winner Robert J. Lefkowitz, MD.