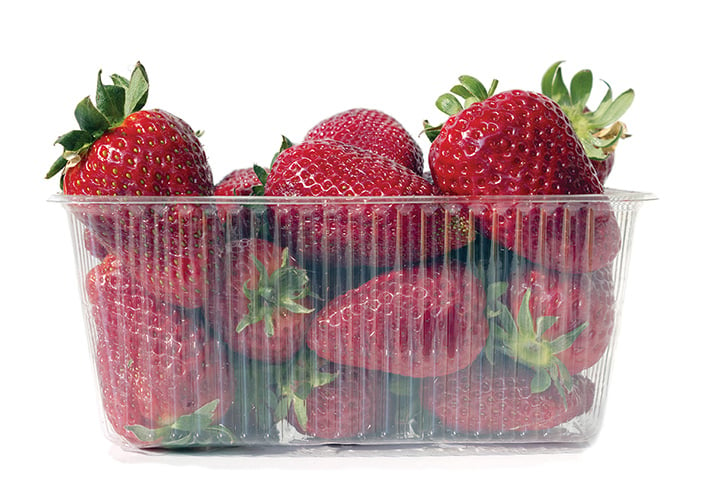 Endocrine-disrupting chemicals known as “obesogens,” found in many fungicides, have been shown to alter the function of fat cells in animal studies. Are fruits and vegetables the next items added to the list of known endocrine disruptors?

The list includes food, plastics, household goods, and cosmetics. It’s a list of items so long — and growing — that they seem impossible to avoid, yet experts say avoidance is the only current protection against endocrine-disrupting chemicals (EDCs). The use of EDCs has now emerged as one of the most urgent threats to global public health.

EDCs are hundreds of chemicals, or mixture of chemicals, that mimic, block, and interfere with the body’s natural hormones. EDCs can alter the ways cells develop and grow, and exposure can increase the risk of developing two of the most significant health epidemics — diabetes and obesity. Both human and animal studies have also connected EDC exposure to infertility, early puberty, hormone-related cancers such as breast and ovarian cancer, thyroid disorders, and neurological issues.

“I was not acutely aware of all the additional chemicals present in such commonplace items, such as dishes, foods, and grooming items. When I am informed about a new endocrine-disrupting chemical, I put forth the effort to discuss it with my patients during their office visits. – Tronya Hawkins, MD, obstetrician-gynecologist, St. Vincent Medical Group, Indianapolis

The Statement emphasizes EDCs that are well-investigated, including: bisphenol A (BPA), phthalates, pesticides, persistent organic pollutants such as polychlorinated biphenyls, and dioxins.

But has the medical community and general public been made adequately aware of these chemicals’ threat?

“I believe that the characteristics of EDC exposure as well as ‘how’ and ‘when’ their effects are noticed has not alarmed the public to the global and urgent matter that EDC exposure represents,” Nadal says. “We are not fronting an easy situation in which a single chemical is causing an evident health effect in a short period of time after exposure. There are hundreds of thousands of chemicals on the market, and thousands of new ones are being synthesized each year. Each of them has the potential to cause harm.”

“EDCs produce a subtle effect on health a long time after exposure, which often occurs during fetal development,” Nadal adds. “Furthermore, EDCs do not directly initiate a pathology, yet they increase the probability of an individual suffering from chronic diseases…that have multifactorial causes. To me, the fact of not having a straightforward cause-effect relationship avoids the public alarm of EDC exposure.”

The role of EDCs in metabolic syndrome and obesity is based a subset of EDCs known as “obesogens.” Chemicals such as BPA, phthalates, tributyltin, and arsenic have been shown in animal studies to affect adipose tissue by altering programming of fat cell development, increasing energy storage in fat tissue, and interfering with neuroendocrine control of appetite and satiety. EDC-induced weight gain depends on the timing and exposure and the age of the animals. Evidence also shows that exposures during the perinatal period can trigger obesity later in life.

A recent expert review in the American Journal of Obstetrics and Gynecology reported that while the obesogen field is still in its early stages, it has numerous ramifications for prenatal and postnatal care and the control/prevention of obesity and metabolic syndrome.

Review author Bruce Blumberg, PhD, professor in the departments of Developmental and Cell Biology and Pharmaceutical Sciences at the University of California, Irvine, summarized both animal and human studies that revealed that increasing numbers of fungicides routinely applied to fruits and vegetables are being identified as obesogens and metabolic disruptors. There are also numerous chemicals shown to be obesogens in animals (and humans) that are intentionally added to foods, including artificial sweeteners, preservatives, and added sugars, especially high-fructose corn syrup.

“While EDCs are pervasive in our environment, it is reasonable to expect, and some studies show, that avoidance can be successful and reduce exposures and body burdens considerably,” Blumberg says. “It is not easy to measure your levels of particular chemicals, but eating fresh food (preferably organic) and avoiding plastics for foods and beverages together with minimizing the use of EDC-containing personal care products will make a big difference in body burdens. In turn, this can only have beneficial consequences for pregnancy outcomes and the health of our children.”

Blumberg urges that this should be a top priority for women of reproductive age who plan to become pregnant, are pregnant, or who have pre-pubertal children. “These are the most sensitive times, as far as we know, and the times that reducing exposures will have the greatest benefit,” he says.

The AJOG review further reported that although many obstetricians believe counseling patients would help avoid environmental contaminants, only 45% routinely discuss mercury and just 5% – 10% discuss the EDCs BPA and phthalates during prenatal care. The reviewers suggest that EDCs should be routinely added to the discussion.

Tronya Hawkins, MD, an obstetrician-gynecologist with St. Vincent Medical Group in Indianapolis, says her patients’ potential for exposures are discussed at the beginning of their prenatal care and includes tobacco cessation, environmental/work hazards, foods to avoid, as well as general toxins, though not specifically BPA. She says the list of potential hazards seems to be growing daily.

“I was not acutely aware of all the additional chemicals present in such commonplace items, such as dishes, foods, and grooming items,” she says. “When I am informed about a new endocrine-disrupting chemical, I put forth the effort to discuss it with my patients during their office visits. It’s very challenging to keep up with the changing landscape of environmental interactions, as well as continuing routine prenatal care. It is helpful, however, that patients are seen at multiple visits, giving adequate opportunity to address as many concerns as possible.”

Hawkins adds that the methods for distributing emerging health information to physicians has long caused her some concern.

“It’s most often done through peer-reviewed journals and discussions during regional and national conferences,” she explains. “I would like to see a more robust effort to inform and protect society from these worrisome compounds.”

Decreasing the Toll on the Next Generation

To protect future generations against the serious harm of EDCs, Nadal stresses that urgent global solutions need to be orchestrated within the next five to 10 years.

“It is important to bear in mind that we cannot live without chemistry,” he says. “Chemistry is not bad. It helped us to improve our quality of life, and to increase the expectancy of life very rapidly along the last 60 years. However, this is not for free; there is a toll we pay, which is called pollution. After all, EDCs are a kind of pollution that affects health in a subtle manner.”

“We need to develop new methods, using up-to-date technology, to test new chemicals released to the market, making sure that they do not alter our hormones,” Nadal continues. “We cannot continue any longer following the assumption that a chemical is safe until proven otherwise.”

“We need to develop new methods … to test new chemicals released to the market, making sure that they do not alter our hormones. We cannot continue any longer following the assumption that a chemical is safe until proven otherwise.” – Angel Nadal, PhD, professor, Physiology, Institute of Bioengineering and CIBERDEM, Miguel Hernandez University of Elche, Alicante, Spain

Nadal adds that educating the public is essential but education should be started in schools. “We need to continue educating the medical community as well, many of them still believe that EDCs do not represent an important health problem.”

Nadal says he agrees with his fellow chemists that toxicology should be incorporated into their curriculums so that students – and perhaps future endocrinologists – can learn early on the problems that EDCs represent and that the problem will only get bigger if something is not done now. “Chemistry has to turn to ‘green chemistry’ and governments must invest in this direction,” he says. “In a mid-, or perhaps long term, only using green chemistry we will be able to develop paying the lowest toll.”

— Fauntleroy is a freelance health writer based in Carmel, Ind., and a regular contributor to Endocrine News. She wrote about testosterone therapy for older men in the June issue.

At-A-Glance
• The use of EDCs has now emerged as one of the most urgent threats to public health.
• The role of EDCs in metabolic syndrome and obesity is based on a subset known as “obesogens”
• Increasing numbers of fungicides routinely applied to fruits and vegetables are being identified as obesogens and metabolic disruptors.