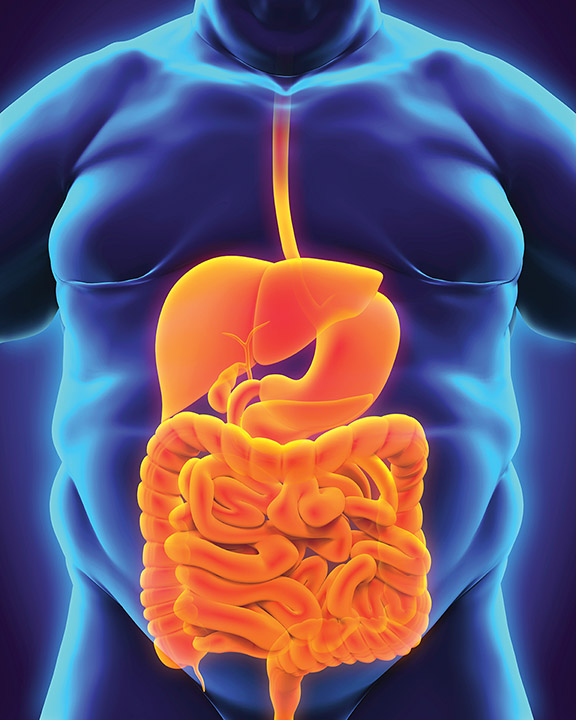 From a stomach-emptying device to gastric balloons to reformulated drugs, weight-loss options continue to multiply. But are they the wave of the future or a temporary solution to a chronic problem?

As the challenge of treating obesity continues to grow, so do the treatment options. Over the past two years, physical interventions that are less invasive than bariatric surgery and new formulations of established drugs have received Food and Drug Administration approval.

Perhaps the most unusual new approach is a device patients use to empty part of their stomach contents before the calories can be digested.

Inserted endoscopically in outpatient surgery, the AspireAssist (Aspire Bariatrics) device consists of a tube that runs from the stomach to a port valve on the abdomen. After a meal, the patient attaches a tube to the port and spends five to 10 minutes emptying about 30% of the meal into a toilet.

In a one-year clinical trial, AspireAssist patients lost an average of 12.1% of their total body weight compared with 3.6% for the control group, who received only lifestyle counseling. It is approved for indefinite use in adults with a BMI of 35 to 55 kg/m2, although the tube may need to be replaced periodically.

The device is not for everyone, and particularly not for patients with eating disorders. “It requires a certain organization of the lifestyle that would allow the person to use the device 20 to 40 minutes after each meal, three times a day,” according to Anastassia Amaro, MD, an assistant professor in the division of endocrinology and metabolism at the Perelman School of Medicine at the University of Pennsylvania, who participated in the device’s clinical trials.

“What motivates me to suggest this device to my patients is that the weight loss happens not only from the withdrawal of about 30% of the consumed calories, but also from patients changing their eating behavior and implementing more mindful eating patterns, such as chewing carefully and eating more slowly. Only well-masticated food can be easily aspirated,” Amaro says.

The FDA approved two different balloon systems in 2015, both of which are placed in the stomach via endoscopic procedures: The Orbera Intragastric Balloon System (Apollo Endosurgery) can be filled with saline from 400 to 700 cc. The ReShape Integrated Dual Balloon System (ReShape Medical) contains two connected, saline-filled balloons that can occupy up to 900 ccs.

In 2016, the FDA approved the Obalon Balloon System, which does not require endoscopic insertion. The patient swallows a capsule attached to a thin inflation catheter. The capsule opens in the stomach, and the balloon is filled with air via the catheter. Up to three balloons, each up to 250 cc in volume, can be used.

The balloons are approved for patients with a BMI of 30 to 40 kg/m2 who have been unable to lose weight through diet and exercise. “It is designed and approved for people who in general have less weight to lose than a typical bariatric surgery patient,” says Aurora Pryor, MD, chief of bariatric, foregut, and advanced gastrointestinal surgery at Stony Brook University, who participated in the clinical trial for the Obalon system. “For somebody who is nervous about surgery or has a borderline BMI for surgery, the balloon is a great way to see if something extra will make a difference. If somebody is committed and they want a lifelong permanent change, I think surgery right now is a little more predictable option.”

She says that the Obalon system may have an edge over the others because it does not require an initial endoscopy procedure and each balloon is smaller. “The nausea and the side effects are less than I see with other balloon systems. Even though the percentage of patients who experience nausea is comparable, the severity seems to be less,” Pryor says.

Although the balloons are only approved for short-term use, Pryor says that “around 85% of the people who lost weight with a balloon were able to keep it off at a year. By the time the balloons came out, patients were ready to move on. They were happy to have them as a temporary thing, but they wouldn’t want them forever.”

“The current approach is to manage obesity as a chronic disease. We expect weight regain if we don’t stay vigilant and continue treatments to keep it off.” –   Donna Ryan, MD, professor emerita, Pennington Biomedical Research Center, New Orleans

New formulations are designed to make a pair of weight-loss drugs more effective — by raising and lowering pill doses.

The appetite-suppressant phentermine has been in use since 1959, but the available doses — an extended release of 37.5 mg and a 15-mg capsule — do not offer the flexibility needed, according to Scott Kahan, MD, MPH, medical director of the Strategies to Overcome and Prevent (STOP) Obesity Alliance at George Washington University: “What a lot of doctors don’t realize is that the traditional dose of phentermine is generally way too high. You don’t need that high a dose to get a good benefit, and often people can’t tolerate that high a dose, so patients often end up having poor outcomes.”

The problem is that phentermine is a stimulant, so patients have problems with the side effects of insomnia, jitteriness, headache, high blood pressure, high pulse, and tachycardia.

Sold under the brand name Lomaira (KVK Tech), the new version is 8 mg and scored so it can be easily split in half. It can be taken up to three times a day, 30 minutes before each meal, not just in the morning or before breakfast, as with the 37.5-mg version. “When you use a lower dose, you often get very good efficacy, and it is much better tolerated. I’ve had very good outcomes with it,” Kahan says.

In contrast to the lower dose of phentermine, lorcaserin (Belviq) is now available in a higher, extended-release version. Belviq came out in 2012, and has been dosed at 10 mg twice daily, but the new Belviq XR is a 20-mg, once-a-day version (so the total daily dose remains the same).

“From a practical perspective, it is much easier for most people to take these medications once daily rather than twice daily, so that has been very well received. It works better because people are actually taking it more consistently if they don’t have to take that second pill,” Kahan says.

Lorcaserin activates the serotonin 2C receptor in the brain, which may help patients eat less because they feel full after eating smaller amounts of food. In clinical trials, patients on the drug lost an average of 3% to 3.7% more body weight than those in the placebo group.

“…we don’t have enough data on balloons to know how useful they are going to be over the long term. But maybe we will use them as one way to produce more weight loss, and then we will use drugs, special diets, and special exercise programs to help maintain the weight loss. I think combining these approaches is the wave of the future.” –   Donna Ryan, MD, professor emerita, Pennington Biomedical Research Center, New Orleans

As clinicians learn more about the best way to use these tools, having more options in the toolbox can only help, says Donna Ryan, MD, professor emerita at Pennington Biomedical Research Center in New Orleans: “The current approach is to manage obesity as a chronic disease. We expect weight regain if we don’t stay vigilant and continue treatments to keep it off.  For example, we don’t have enough data on balloons to know how useful they are going to be over the long term. But maybe we will use them as one way to produce more weight loss, and then we will use drugs, special diets, and special exercise programs to help maintain the weight loss. I think combining these approaches is the wave of the future.”