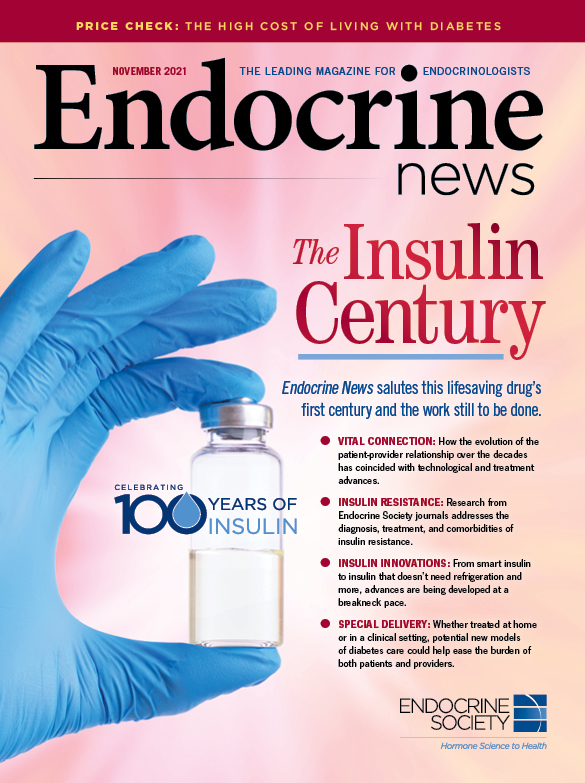 Each November during Diabetes Awareness month, we typically devote the issue to various diabetes research studies as well as new breakthroughs in treatment. However, in honor of the 100th anniversary of the discovery of insulin, we have skewed our coverage somewhat in this issue of Endocrine News to marvel at this Canadian import that has saved lives around the world for the last century.

Instead of a retrospective of insulin’s illustrious history — which can be found in great abundance elsewhere and is easily accessed — we’ve decided to set our sights on what the future of insulin holds for people living with diabetes as well as the providers caring for them. There’s also a great deal of enthusiasm for new research and technology surrounding this lifesaving elixir. Just as the doses of insulin that were first administered in the 1920s are different from what is being given today, the insulin of tomorrow will be very different in how it is formulated and administered today.

Throughout insulin’s first century of existence, one condition that has continued to confound researchers, clinicians, and even patients alike is insulin resistance. Kelly Horvath addresses this phenomenon with new research from Endocrine Society journals in her article, “Insulin Resistance: New Insights into Development, Diagnosis, and Treatment.” Specifically, the new research Horvath discusses concerns the relationship between smoking behavior and insulin resistance with both traditional and e-cigarettes. In her article, Horvath also looks at research that discusses a treatment approach for pediatric patients in low- or middle-income countries of diagnosing severe insulin resistance guided by the clinical picture and widely available laboratory tests so patients can avoid severe, disabling consequences. Horvath further looks at research on intestinal floral, which is a key factor in insulin resistance and contributes to developing polycystic ovary syndrome.

Senior editor Derek Bagley discusses one of the most controversial aspects today concerning insulin: The high price tag in the U.S., in “The Cost of Living (with Diabetes).” While healthcare experts, industry leaders, and legislators have taken some steps to address the problem, Bagley reveals that researchers have been studying trends in insulin use that could provide some insights into what drives the cost. However, the experts who spoke to Endocrine News agree that it’s going to take action on everyone’s part before real progress is made. “I think we want to, as individuals, as well as the [Endocrine] Society, advocate to our representatives in Congress and the Administration, how important this is for people with diabetes to have effective and affordable insulin,” says Endocrine Society Past-President Robert Vigersky, MD, chief medical officer, Medtronic. “I think the Society and its members need to continue to advocate and pound that message home, and get the individual physicians, the endocrinologists, as well as their patients up in front of their representatives and make the case.”

As part of its 100 Years of Insulin, the Endocrine Society has been sponsoring a litany of online events and videos highlighting the drug’s history and future, as well as its evolution. One of those webinars, “Building a Strong Patient-Provider Relationship” highlighted the importance of trust between the patient and provider and how that relationship has evolved in the last several decades. Horvath delves into the details of this roundtable discussion in “Evolution of Diabetes Management: The Patient-Provider Relationship, Accessing Resources, and Surmounting Obstacles” that weaves a remarkable tale of how patient self-care has evolved in the last 50-plus years, as well as the new technology and services available to people living with diabetes.

Eric Seaborg heads into a pretty exciting future about the development of new types of insulins in “Coming Attractions: Insulin’s Intriguing Future.” From “smart insulin,” once-a-week insulin, and insulin that would no longer need to be refrigerated, researchers around the world are working on a variety of insulin innovations. Some of these new formulations could be available sooner than you might expect, creating yet another step forward for this lifesaving therapy.

The future of delivering that therapy is discussed in Bagley’s Patient Resources article, “Special Delivery: A Look at New Modes of Diabetes Care.” Here, Bagley discusses potential new models of diabetes care could help ease the burden of both the patients and the providers, whether treatment takes place at home or in a clinical setting.

By the way, the “Building a Strong Patient-Provider Relationship” webinar and many other videos celebrating the 100 years of insulin are available online and are highly recommended!