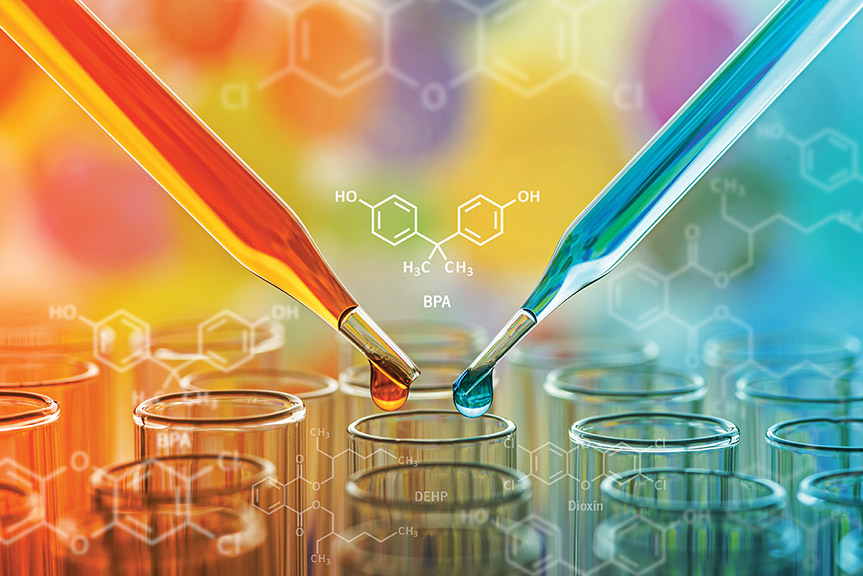 Many researchers are sounding the alarm about endocrine disruptors. So why aren’t regulators listening?

At its national meeting in April, the Endocrine Society signaled its concern about the public health risks of endocrine-disrupting chemicals (EDCs) by presenting an award for outstanding public service to four scientists for their work in bringing the danger of EDCs to the attention of the public. And yet, these and other scientists are frustrated at their inability to convince government regulators of the risks.

As a case in point, the U.S. Food and Drug Administration, the European Food Safety Authority, and health authorities in Canada and Australia all consider one of the most well-known EDCs — bisphenol A — to be safe in food contact applications.

According to several researchers active in the field of EDCs, three issues in particular make it difficult to separate fact from fiction when it comes to EDCs:

“I think much of the debate is manufactured,” says R. Thomas Zoeller, PhD, professor of biology at the University of Massachusetts, one of the recipients of the public service award, and a co-author of both the first and second Endocrine Society scientific statements on EDCs. “There are people who are paid by industry to manufacture a debate. When somebody is paid to make up things that sound right, that is not a legitimate, scientific debate.”

“I think much of the debate is manufactured. There are people who are paid by industry to manufacture a debate. When somebody is paid to make up things that sound right, that is not a legitimate, scientific debate.” – R. Thomas Zoeller, PhD, professor of biology, University of Massachusetts, Amherst

Another researcher compares this effort to the fossil fuel industry’s attempt to obfuscate the issue of climate change by making it appear that there is scientific debate when there is none. Heather Patisaul, PhD, professor of biological sciences at North Carolina State University, says, “If you talk to people outside the regulatory community — scientists at the Endocrine Society, academic scientists, scientists who study chemicals — we all think that the evidence is pretty strong that BPA contributes to human health effects. There is this disparity between what the regulatory agencies say and what the rest of science says.”

Bisphenol A (BPA) provides a good case study of this dichotomy because it has been studied so extensively. Environmental and consumer groups have lobbied to get it out of the food supply, but have not succeeded except in the case of baby bottles.

Released in June 2014, the FDA’s most recent “updated safety assessment of bisphenol A for use in food contact applications” was based on an extensive literature review of more than 300 studies, according to Jason Aungst, PhD, a supervisory biologist at FDA who led the group that performed the review and assessment. The safety assessment concluded that “an adequate margin of safety exists for BPA at current levels of exposure from food contact uses.”

But according to Patisaul, the FDA group cherry-picked studies to reach that conclusion.

In the literature review’s section on neurotoxicology, FDA reviewers examined 36 studies and concluded that only one had any relevance to its hazard identification and risk assessment. That industry-funded study found little effect of low-dose, acute exposure to BPA on a number of behavioral parameters in adult, ovariectomized female rats. Patisaul points out that the endpoint — behavioral parameters — and the study population — adults without ovaries — are hardly the best places to look for the effects of BPA, which is believed to have the greatest effects during development.

Aungst defends the conclusions, saying they “are based on our comprehensive and systematic review. We used predefined, scientifically supported criteria for evaluating the level of inclusion for information from each study.”

The literature reviewers also found that not a single one of the 48 epidemiological studies they examined was of any use for the agency’s risk assessment. Zoeller says that regulators have told him that one reason they have dismissed epidemiological studies is that people are exposed to so many chemicals, it is hard to sort out individual impacts.

He thinks that there is a gulf between the way regulators — who may look at endpoints of acute toxicity rather than endpoints reflective of disease — and the way he and other researchers see some issues: “The measurements of endocrine disruption that the regulatory community uses are really not designed to capture effects on hormone systems as we know them today.”

The FDA itself sowed confusion about its attitude toward BPA in 2012 when it disallowed the use of BPA in baby bottles. Aungst says that this action was “not a safety decision,” but a response to a request from the American Chemistry Council, an industry trade association. Aungst says that it was not a “ban” but an “abandonment” — the FDA merely removed the regulation allowing the use of BPA at the request of manufacturers that had stopped using it in response to pressure from consumers.

Not Everyone Is Convinced

Zoeller acknowledges that there are genuine disagreements among researchers in the field. For example, Geoffrey C. Kabat, PhD, MS, a cancer epidemiologist at the Albert Einstein College of Medicine of Yeshiva University, is not convinced of the risks of BPA and other EDCs. He notes that the issue of falling sperm counts linked to EDCs has been discussed for at least 25 years, but “it turned out these studies showing falling sperm counts were off the mark and there was no universal decline in sperm counts” and that trends in other health conditions linked to EDCs “aren’t clear.”

He says that looking at the effects of EDCs in a condition such as diabetes is a distraction from the more obvious drivers, such as the many factors leading to weight gain and obesity in modern society. Kabat’s position is based in part on evidence that the amount of BPA that leaches out of containers is very small and that whatever BPA is ingested is metabolized quickly and almost completely, so people “are absorbing trivial, minute amounts.”

Kabat points to research such as a study by government researchers (but funded by the American Chemistry Council) recently published in Food and Chemical Toxicology that examined serum and urine BPA levels in pregnant women and concluded that “typical exposures of North American pregnant women produce internal exposures to BPA within the picomolar range.”

These issues of rapid metabolism and low exposure levels are often cited by FDA researchers and regulators to bolster their belief in BPA’s safety, but are particular sticking points for those who believe in the risks of BPA.

Zoeller takes issue with an oft-quoted statistic that BPA goes to the liver first where 99% is metabolized because biological systems don’t function at this very high level of efficiency and because there is no reason to assume that the resulting metabolites are inactive or benign.

“If you talk to people outside the regulatory community — scientists at the Endocrine Society, academic scientists, scientists who study chemicals — we all think that the evidence is pretty strong that BPA contributes to human health effects. There is this disparity between what the regulatory agencies say and what the rest of science says.”- Heather Patisaul, PhD, professor of biological sciences, North Carolina State University, Raleigh

Laura N. Vandenberg, PhD, assistant professor at the University of Massachusetts, Amherst, says the focus on knowing how much BPA is in the blood is somewhat of a red herring because there is a wealth of evidence from epidemiological, longitudinal, and animal studies showing that BPA has effects at doses below the FDA’s “no-observed adverse effect level” used to calculate the “safe” dose for human exposure. “If the doses that are used to calculate ‘safe’ amounts are wrong, then the issue of how much humans are exposed to is secondary,” Vandenberg says.

Perhaps a final point where perspectives divide is over the level of certainty needed before taking action. “All of the pediatricians I know are worried about this because they see increases in abnormalities and birth defects,” Zoeller says. “The people who have become the most vocal are the ones who have been on the ground seeing what’s happening.”

— Seaborg is a freelance writer based in Charlottesville, Va. He wrote about fracture liaison services in the May issue.

At A Glance
• Many academic researchers complain that federal regulators are cherry-picking among studies of endocrine-disrupting chemicals in ways that favor industry-generated research.

• The FDA considers bisphenol A to be safe, but its most recent safety assessment discounted the contributions of many studies, noting that of the 48 epidemiological studies it examined, “no single study was able to make a definitive contribution to hazard identification or risk assessment.”

• BPA has been found to have deleterious effects at levels below those considered safe by regulators, according to some researchers.