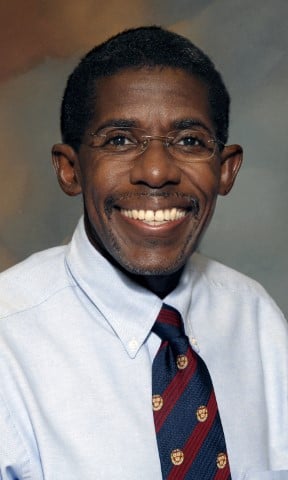 On December 14, Endocrine Society past-president E. Dale Abel, MD, PhD, was one of the first physicians at the University of Iowa’s Carver College of Medicine to receive the COVID-19 vaccination.

Abel, chair of the Department of Internal Medicine; director, Fraternal Order of Eagles Diabetes Research Center; and professor of medicine, biochemistry and biomedical engineering at the University of Iowa, Carver College of Medicine, in Iowa City, received the Pfizer/BioNtech vaccine and he says he experienced both a tinge of excitement as well as a small amount of anxiety when he received notification about his injection.

“Overall, I was eager to do this because of my conviction that the COVID-19 vaccine is safe and highly effective and represents a major advance towards ending this pandemic,” he tells Endocrine News. “I also felt that as a highly visible underrepresented minority, it was important for me to be a public example to motivate members of our community to consent to receiving the vaccine when it becomes more widely available.”

“As more of us get immunized, I am confident that we will gradually be returning to life as normal. This might not happen though until the end of 2021, but it will be worth it!” – E. Dale Abel, MD, PhD, past-president, Endocrine Society

Upon receiving the injection, Abel says that he did not actually feel the actual shot even though he was aware of the “cool” liquid entering his arm. He adds that later in the day and the following morning he felt only mild soreness in his arm and a low-grade temperature, which, for him is an increase of his typical temperature of 97.4 F to 98.0 F.

None of this stopped Abel from his morning exercise and the arm soreness was gone by the evening of the second day, “as if nothing had happened.” He is scheduled for his booster shot at some point in early January, but he adds that he will continue to wear a mask outside of his home as well as practice physical distancing.

“As more of us get immunized, I am confident that we will gradually be returning to life as normal,” he says. “This might not happen though until the end of 2021, but it will be worth it!”