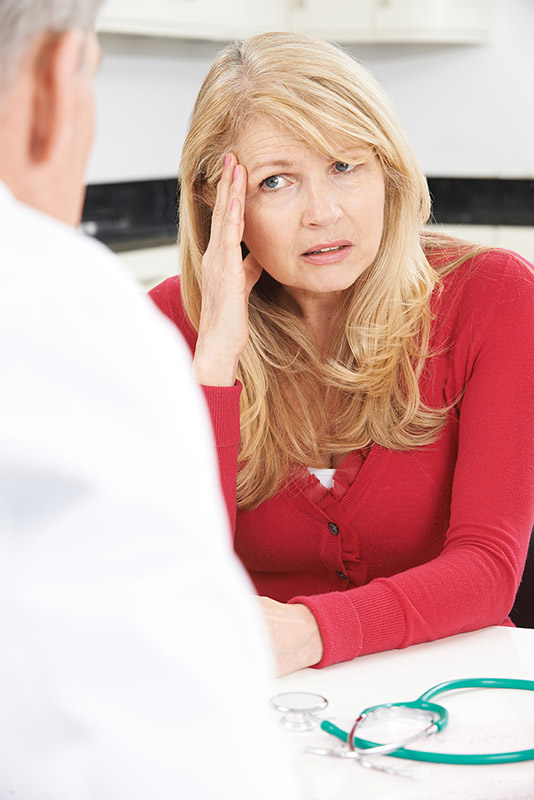 Women continue to be undertreated for symptoms of menopause, and a new Endocrine Society clinical practice guideline aims to enlist endocrinologists in leading the way to correct that.

Hormone therapy remains the most effective treatment for the vasomotor and other symptoms of menopause, an expert panel from the Endocrine Society and allied organizations concludes in a new clinical practice guideline.

Many clinicians still seem hesitant to prescribe menopausal hormone therapy (MHT), so endocrinologists need to lead the way in ensuring that women get the treatment they need, says Cynthia A. Stuenkel, MD, clinical professor of medicine at the University of California, San Diego school of medicine and chair of the task force that wrote the guideline, “Treatment of Symptoms of the Menopause.”

A 2012 Endocrine Society survey found that 72% of women experiencing menopausal symptoms were not receiving any treatment for them, a huge shortfall considering that essentially every woman who lives long enough will pass through this phase.

The treatment was common before the initial findings of the Women’s Health Initiative scared many women and physicians off the treatment. In the 13 years since then, a great deal of evidence has confirmed that MHT offers a safe option for many women to alleviate symptoms such as hot flashes, night sweats, vaginal dryness, and pain on intercourse. And there are also many alternatives for specific situations, Stuenkel says.

“As endocrinologists we bring a very broad and unique view to the specific conditions associated with midlife and the menopause,” Stuenkel says. “It is difficult to make broad blanket recommendations because women are incredibly different in the degree of their symptoms, in their sense of what they are willing to take to relieve these symptoms, and in their other associated health concerns, so the guideline really focuses on trying to customize their therapy.”

“It’s good news that women now have more options for managing menopausal symptoms, but deciding among the expanded array of hormonal and nonhormonal treatments can be overwhelming for women and clinicians alike,” says JoAnn Manson, MD, DrPH, a professor at Harvard Medical School and chief of the Division of Preventive Medicine at Brigham and Women’s Hospital in Boston, who was not on the committee that wrote the guideline but did review it. “This practice guideline culls an enormous body of research to facilitate personalized decision-making, incorporating the patient’s risk factor status and treatment preferences.”

The guideline is designed to provide the tools for this individualized approach, describing the evidence needed to help clinicians answer questions such as when hormone therapy is appropriate and what other treatments are available when it is not. The guideline committee tried to be comprehensive enough to provide recommendations on most situations the clinician will encounter, and laid out the information in discrete, easy-to-find sections, Stuenkel says.

A Portal on the Second Half of Life

Another important reason that endocrinologists should be proactive when women present for menopausal transition is the opportunity it offers as “a portal to the second half of life” and “a critical window to reassess lifestyle,” Stuenkel says. “We wanted to remind clinicians that this is a time for overall awareness of cardiovascular risk, cancer screening and risk, bone health, smoking cessation, and alcohol use. All those areas should be considered.”

Some Specifics on Hormones

The guideline’s recommended hormone treatment is estrogen plus progestogen for patients with a uterus and estrogen alone for those without a uterus. The guideline recommends against the use of custom-compounded hormones. But clinicians should individualize the treatment based on a woman’s risk for cardiovascular disease, venous thromboembolism, and breast cancer.

The guideline panel commissioned a meta-analysis of the literature regarding the relative risk of oral vs. transdermal therapies related to thrombosis and stroke. The risk appeared higher with oral therapy, although the conclusion was based primarily on observational studies, Stuenkel says. For this reason, the guideline recommends transdermal delivery for women who are at moderate cardiovascular risk or increased risk of venous thromboembolism. The guideline favors nonhormonal treatment for women at high cardiovascular risk or intermediate or high breast cancer risk.

There continues to be no definitive answer to the question of how long to continue MHT. “We suggest that the decision to continue MHT be revisited at least annually, targeting the shortest total duration of MHT consistent with the treatment goals and evolving risk assessments of the individual women,” the guidelines say. Similar to other guidelines, it implies that five years could be sufficient for most patients, and could be continued beyond that only in special cases, such as patients with a high fracture risk who prefer MHT over other, bone-specific medications and patients whose symptoms remain so intolerable during a trial of stopping that they elect to continue after weighing the risks.

The guideline contains a separate section for patients who have moderate-to-severe vasomotor symptoms but should be steered away from hormonal treatment based on risk factors or who shy away because of personal preferences, Stuenkel says. For these patients, the guideline recommends selective serotonin reuptake inhibitors/serotonin-norepinephrine reuptake inhibitors, gabapentin, or pregabalin (although contraindications should be considered). If these do not work, clonidine can be considered, but it has a poor side-effect profile.

The guideline recommends counseling women on the lack of evidence supporting the effectiveness of over-the-counter and complementary medicine therapies such as botanicals, black cohosh, omega-3-fatty acids, vitamin E, and more.

“For postmenopausal women with mild or less bothersome hot flashes, we suggest a series of steps that do not involve medication, such as turning down the thermostat, dressing in layers, avoiding alcohol and spicy foods, and reducing obesity and stress,” the guideline notes.

The guideline also has a separate section on treatment of genitourinary symptoms. It recommends or describes the conditions for use of: vaginal moisturizers for patients with vulvovaginal atrophy (VVA); the use of low-dose vaginal estrogen for VVA when moisturizers are insufficient; vaginal lubricants for insufficient vaginal secretions for comfortable sexual activity; and ospemifene for moderate to severe dyspareunia associated with vaginal atrophy (and the contraindications to consider).

“It is difficult to make broad blanket recommendations because women are incredibly different in the degree of their symptoms, in their sense of what they are willing to take to relieve these symptoms, and in their other associated health concerns, so the guideline really focuses on trying to customize their therapy.”  — Cynthia A. Stuenkel, MD, clinical professor of medicine, University of California, San Diego School of Medicine; chair, “Treatment of Symptoms of the Menopause” task force

But Not for Prevention

Hormones are appropriate for treating symptoms, but “current evidence does not justify the use of MHT to prevent coronary heart disease, breast cancer, or dementia,” the guideline says.

“Twenty years ago we were encouraging women to take MHT for prevention,” Stuenkel says. This use had been growing through the 1980s and 1990s, but was brought to a screeching halt by the initial findings of the Women’s Health Initiative.

To shed light on this issue, the guideline panel commissioned a second meta-analysis to examine whether MHT confers any mortality benefit. “This meta-analysis did not find a mortality benefit, although there are some reports that indicate there may be one, particularly in young, healthy women starting MHT close in time to menopause. This remains an area of some controversy,” Stuenkel says.

“The FDA has stated that hormone therapy can be effective for preventing bone loss associated with menopause,” Stuenkel says. But the questions of whether there is a cardiovascular or cognitive benefit “are still hotly debated, and in my view inconclusive.”

“But our main goal was to re-enlist endocrinologists in giving the green light to use MHT in appropriate women,” she says.

Seaborg is a freelance writer based in Charlottesville, Va. He wrote about the epigenetic effects of obesity in the March issue.

• Menopausal hormone therapy is the most effective treatment for the vasomotor and other symptoms of menopause, but many clinicians seem to be hesitant to use it.

• Every woman’s situation is unique and there are many therapy options, so treatment plans must be tailored carefully to the individual.

• Nonhormonal treatments may meet the needs of women whose risk profiles — or personal preferences — contraindicate hormone use.