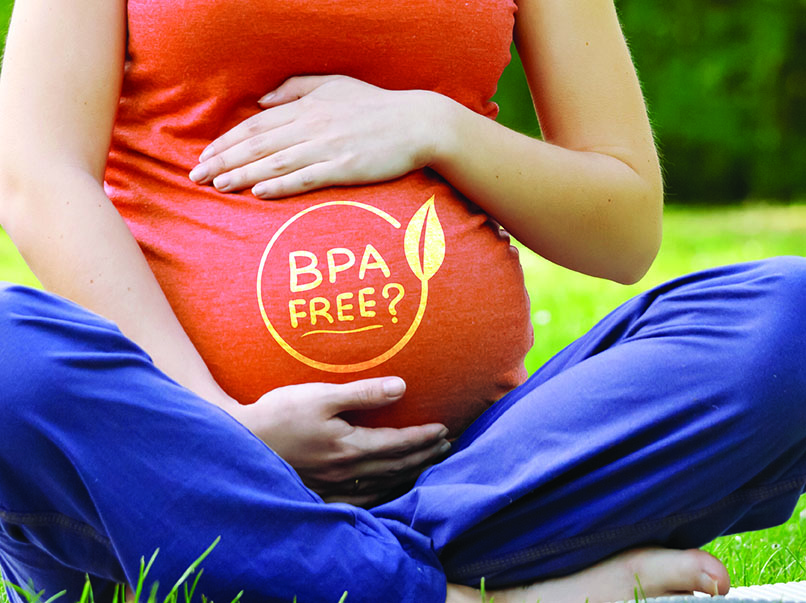 As more and more data stack up arguing the dangers of endocrine-disrupting chemicals on human health, three new studies emphasize the damage they can do during pregnancy.

As endocrine-disrupting chemicals (EDCs) gain notoriety for the havoc they wreak on human body systems, three new studies shed light on what adverse effects EDCs can have during pregnancy for the mother, the placenta, and the child. The bad news is, not only is exposure to EDCs unavoidable, their power to do damage is exponentially greater during this critical developmental stage.

In “Bisphenol-A Treatment during Pregnancy in Mice: A New Window of Susceptibility for the Development of Diabetes in Mothers Later in Life,” published in Endocrinology, researchers including Paloma Alonso-Magdalena, PA-M, PhD, of the Universidad Miguel Hernández de Elche, in Alicante, Spain, investigated what exposure to low-dose bisphenol-A (BPA), a widespread EDC with proven estrogenic activity, caused in pregnant mouse dams in the long term. “Up to now, the focus has been centered on how exposure to endocrine disruptors during pregnancy increases metabolic disorders in offspring, but this is among the first studies to analyze how they affect the mother’s glucose homeostasis,” says Alonso-Magdalena. The dams began to exhibit overweight and altered glucose metabolism by four months after delivery as well as impaired pancreatic β-cell function and mass by month seven postpartum, with clear implications for disrupted insulin secretion in response to glucose.

Importantly, the researchers treated non-pregnant dams with the same dosages of BPA and found no subsequent metabolic alteration, suggesting that pregnancy presents a critical window for susceptibility to harmful BPA effects, including the risk of developing metabolic syndrome and diabetes later in life. This is possibly due to increased stress on pancreatic β cells, related to the abnormal estrogenic activity during gestation caused by BPA exposure. Alonso-Magdalena and colleagues found that, “A more rapid deterioration of the pancreatic β cell with aging occurs in those mothers exposed and, therefore, an impaired control of blood glucose.” This study shows that the problems inherent in the near-ubiquitous BPA exposure among humans cannot be underestimated. If mouse models are any indication, women may face the long-term risks of weight gain and critical metabolic disruptions after exposure during pregnancy.

In “Endocrine Disruption in Human Placenta: Expression of the Dioxin-Inducible Enzyme, CYP1A1, Is Correlated with that of Thyroid Hormone-Regulated Genes,” published in The Journal of Clinical Endocrinology & Metabolism, R. Thomas Zoeller, PhD, of the University of Massachusetts, in Amherst, and colleagues proved a principle that they had been investigating for the last 10 years, starting with cells in culture followed by animal studies. They showed that some polychlorinated biphenyl (PCB) congeners could activate the expression of an enzyme that altered the structure of other PCB molecules, which could in turn activate the thyroid hormone receptor (THR). “This was a coup we were not expecting, but it made a lot of sense,” Zoeller says. “In culture, we could take apart the pathway and prove what was required in each step — an enzyme gets induced that essentially bioactivates specific PCBs, which can then drive THR function.”

“From the 50,000-foot view, I don’t think you can play around with TH function during pregnancy and not have some problem, but saying specifically what those problems are and what these measurements reveal is difficult.”

To replicate this two-step process in humans, in whom PCBs bioaccumulate over the lifetime, the researchers had to find an accessible tissue with certain biochemical elements — first, that the enzyme CYP1A1 is inducible within it, and second, it has known targets of TH action. “The placenta was it,” Zoeller says. They isolated mRNA from 132 placentas from healthy, vaginal deliveries obtained from the GESTE study looking for whether the same two-step process would occur — that CYP1A1 would be induced and that its increased activity would change molecules in the placenta to form THR activators. “That’s exactly what we saw,” Zoeller says. “The main observation here is that CYP1A1 expression was very tightly correlated with the expression of genes known to be regulated by the THR. Essentially what we are showing is a correlation at a molecular level.” After seeing that what they had predicted would happen did actually happen, the researchers systematically ruled out every potential confounding variable to be sure that their data stood up to scrutiny and that they were not simply willing this causative relationship into being.

In another “surprising predictability,” a subset of their original 164 placentas that had been set aside because of a lack of measurable CYP1A1 expression next turned out to be vitally important to their findings. These 32 samples showed a correlation between TH in the cord blood and the expression of TH response genes in the placenta, thus exhibiting normal interaction. The 132 CYP1A1 placentas, however, showed no correlation of TH and the expression of these genes. “To me, that’s the definition of disruption,” Zoeller says. “There’s a chemical or chemicals in there that can interfere with the ability of TH to do its normal thing.” In women who smoked, the CYP1A1 levels were considerably higher.

Given that women with low TH levels give birth to offspring with lower birth weights, lower IQs, and any number of other problems, the implications of this study are potentially profound, although whether or not the mechanism the researchers have identified will lead to some kind of adverse effect is as yet unknown. “The genes that are being regulated are probably affecting the functionality of the placenta,” Zoeller says. “From the 50,000-foot view, I don’t think you can play around with TH function during pregnancy and not have some problem, but saying specifically what those problems are and what these measurements reveal is difficult.”

The next place to investigate is probably muscle, where form and function is tightly linked; moreover, TH plays an important role in muscle development. Such future plans will mean going back to animal studies, but returning to their existing data to view it in light of additional information is a distinct possibility in the meantime. A co-researcher in this study, Larissa Takser, from the University of Sherbrooke Medical Center, in Québec, Canada, is currently working on characterizing the cognitive function of the children born from the 132 pregnancies with CYP1A1 placenta expression. “If our measurements are predictive of impacts on TH function in the fetal brain and maybe even later in development, we might expect a relationship between what we could call a ‘measure of disruption’ and cognitive function,” Zoeller says.

In “Human Chorionic Gonadotropin Partially Mediates Phthalate Association with Male and Female Anogenital Distance,” to be published soon in the Journal of Clinical Endocrinology & Metabolism, Jennifer Joan Adibi, ScD, and her colleagues at the University of Pittsburgh Graduate School of Public Health in Pennsylvania, studied prenatal exposure to phthalates and subsequent fetal developmental pathway disruption to ultimately look at short- and long-term outcomes in the children.

“This research is going in the direction of being able to offer clinicians methods and types of measures early in pregnancy that can be used to assess not just genetic risk but also environmental risk.”

Animal models demonstrate that phthalate exposure during the fetal period can cause defects in male reproductive tract development an various aspects of reproductive health and function. “Now studies are going beyond to suggest that these exposures can increase risk of neurobehavioral and metabolic disorders, obesity, and even eczema and asthma,” Adibi says.

The researchers took genital and phthalate measurements from 541 infants from The Infant Development and Environment Study (TIDES) subjects, specifically, the distance from the anus to the genitals. They found an association with human chorionic gonadotropin (hCG) measured in maternal blood in the first trimester with maternal exposure to phthalates. Higher levels were associated with longer anogenital distance in females and shorter anogenital distance in males.

Although it was historically thought that exposure damage happens directly within the fetus, these researchers wanted to determine whether the placenta responds uniquely to the exposure — that is, whether the placenta’s response at the molecular level can change or contribute to change within the fetus. “It is a nuance, but it shifts the emphasis from waiting until the child is born and has grown up to measure effects to measuring the placenta’s response directly. This gives us a much stronger understanding of what these EDCs are doing,” Adibi says.’

“The benefit of our findings is that they show that we could do more to directly assess environmental effects on pregnancy, whereas most prenatal screening currently addresses genetic defects,” Adibi says. “This research is going in the direction of being able to offer clinicians methods and types of measures early in pregnancy that can be used to assess not just genetic risk but also environmental risk.”

Horvath is a freelance writer based in Baltimore, Md. She wrote about endocrine-disrupting chemicals’ effects on female reproduction in the July issue.