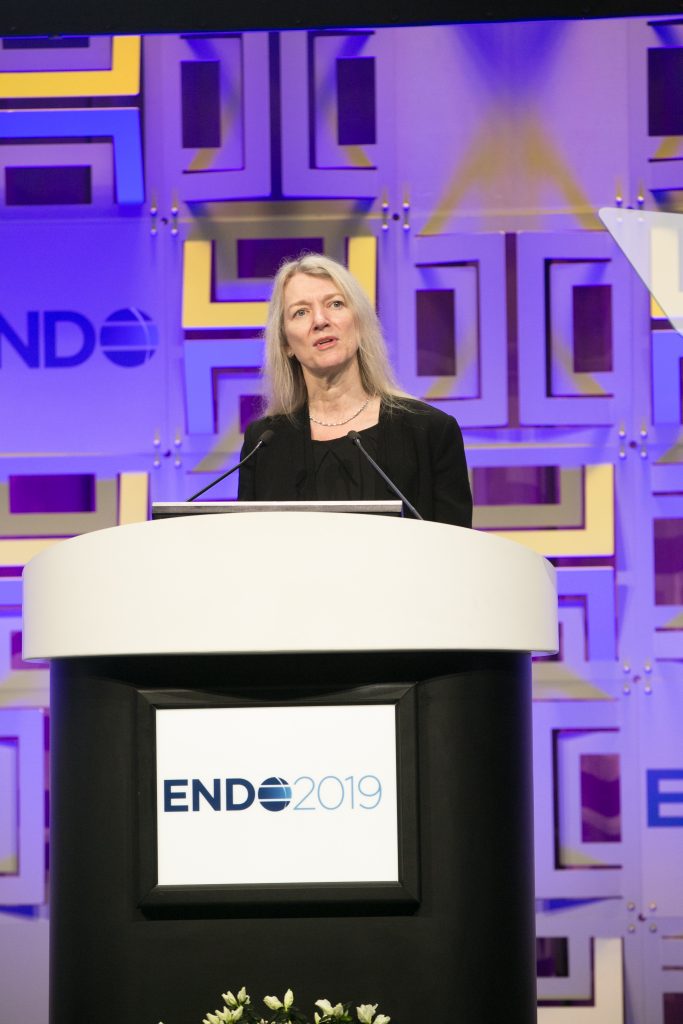 When Cori Bargmann, PhD, head of science of the Chan Zuckerberg Initiative, spoke at ENDO 2019 in New Orleans, she explained how endocrine science and practice can play a vital role in curing — or at least managing — all disease by the year 2100.

Here’s an ambitious goal: Cure, prevent, or manage all diseases by the end of the century. On its face, this goal seems like something out of a science fiction story about a utopian society or at least a bumper-sticker affirmation. But the end of the century is 81 years away, and when you think about the advances medicine has seen in the last 80 to 100 years, this goal doesn’t seem so lofty after all. Insulin was discovered 98 years ago, which isn’t ancient history. Before that scientific leap, people diagnosed with diabetes died young of ketoacidosis, virtually unheard of just a few decades later.

This past March, during ENDO 2019 in New Orleans as part of a session entitled “Utilizing Big Data in Science and Clinical Care,” Cori Bargmann, PhD, head of science of the Chan Zuckerberg Initiative, expanded on exactly why this goal is more within our grasp than we think, but achieving it will require robust collaboration not only among fundamental, translational, and applied sciences, but interdisciplinarity across all medical fields – and endocrinology is uniquely positioned to be the linchpin of it all.

Bargmann, a neuroscientist and geneticist, is renowned for her work studying C. elegans, or transparent roundworms, researching how the nervous system and behavior respond to motivational and emotional states. And it’s here that Bargmann says endocrinology has been one of the most important ways that she and her colleagues have gained insight into human behavior. “Endocrinology very much represents an area where behavior and emotion and motivation intersect,” she says. “My feeling about this field in general is that it’s been tremendously important in linking science and medicine, and that’s only going to be more true in the future as we understand them.”

The Chan Zuckerberg Initiative (CZI) was founded in 2015 by Priscilla Chan and Mark Zuckerberg with the aim of facilitating social progress by focusing on three core areas – education, justice and opportunity, and science – and either funding projects through grants, helping build software tools and apps and other technologies, and collaborating with ongoing projects. In science, CZI funds basic biological research, builds technological tools with and for scientists, and supports collaborations between interdisciplinary experts “At the Chan Zuckerberg Initiative, we are trying to think broadly about how to give scientists the tools that they need to move the field forward,” Bargmann says. “And that could be in any field. That could be an infectious disease, that could be in neurology, and it could be endocrinology.”

“Endocrinology very much represents an area where behavior and emotion and motivation intersect. My feeling about this field in general is that it’s been tremendously important in linking science and medicine, and that’s only going to be more true in the future as we understand them.” – Cori Bargmann, PhD, head of science, Chan Zuckerberg Initiative, Redwood City, California

Bargmann points to diabetes as an example of what she and her colleagues at CZI and the other scientists who collaborate with them are addressing, since many of the mysteries of diabetes have yet to be unlocked. Sure, physicians know the risk factors and can offer various forms of treatment, but the disease process is still a work in progress. “We have a good understanding of genetic risk, but we haven’t moved from a genetic risk that might be present in your body for your entire life to you developing type 2 diabetes and being informed of that by your ophthalmologist when you’re 50 years old,” she says.

Between those two endpoints is a twisting, tangled superhighway of cell biology and physiology and endocrinology, complete with offramps that lead to unexpected avenues, which will require input from many different disciplines to navigate. For example, patients with cancer who are treated with immunotherapies can develop autoimmune diseases, like type 1 diabetes. “This is obviously something that we would like to limit,” Bargmann says. “It also provides an opportunity to understand better what the early stages of those diseases are in a way that has not been possible. And that’s an example of putting together insights from different fields to make progress in all of them. We want immunooncology, we want to treat tumors, and we don’t want those people to develop diabetes.”

To address this issue, CZI supports the Human Cell Atlas, a global collaboration to map and characterize the more than 37 trillion cells in the healthy human body — including how cells communicate with each other — as a resource for studies of health and disease. CZI is partnering with groups like the Broad Institute, the European Bioinformatics Institute, the Wellcome Sanger Institute, the University of California, Santa Cruz, and many more to support this effort.. Endocrinology is fundamentally about a signal released from one cell and then detected by another, even at a distance. “One of the things that is emerging from the Human Cell Atlas project is an understanding of all the different secreted factors made by different cell types, and the expression patterns of their receptors on all different cell types,” Bargmann says.

None of the work CZI or the Human Cell Atlas consortium is doing is aimed specifically at endocrinology, or any other specialty, but that’s the point. Sometimes the best discoveries in science are born out of other seemingly unrelated work. Discoveries are often made by accident. Aspirin worked before anyone understood how it worked.

When Bargmann was a graduate student at MIT, she studied how genetic changes give rise to cancer and she discovered an oncogene mutated in an obscure class of rat tumors, neu/Her2, that could be rejected by the immune system. “That particular gene does not play a role in human neuroblastoma, but following my work, a clinical scientist at UCLA discovered that that same gene was altered in human breast cancer,” Bargmann says. “And following that work, the drug company Genentech developed an antibody [Herceptin] because they knew from the earlier work that, in rats at least, antibodies could be used to reject that cancer.” 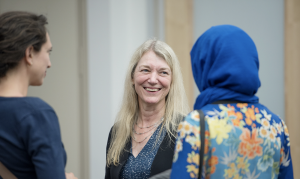 In fact, Bargmann says that it was sessions she attended at ENDO that got her thinking about what other diseases endocrinologists could help cure, prevent, or manage, even a disease like Alzheimer’s. Treatments for Alzheimer’s target amyloid plaque in the brain, and yet all of these treatments have been unsuccessful, partly because resources are poured into a particular hypothesis, so much so that it’s difficult for other ideas to gain purchase. “I think that’s where we can make progress by bringing people together across fields, having endocrinologists think about Alzheimer’s disease, having immunologists think about Alzheimer’s disease,” Bargmann says. “Stepping out of the box of the particularly narrow view of the neurons and the plaques and tangles may move these fields forward.” To that end, CZI’s Neurodegeneration Challenge Network aims to establish a new kind of interdisciplinary collaborative network to better understand the fundamental biology of these diseases and study them from a different perspective.

“If we want to make progress on disease, we have a long path that starts with fundamental understanding that builds toward a deeper understanding through recognizing what the healthy human body does, and then recognizing how that is altered in disease.” – Cori Bargmann, PhD, head of science, Chan Zuckerberg Initiative, Redwood City, California

During her talk at ENDO, Bargmann stressed the importance of collaboration and taking risks, even making mistakes, when it comes to advancing science. This starts with building a foundation that allows healthcare providers to intervene and generate prevention or treatment for different kinds of disease states – knowing the terrain before beginning the journey. Still, she recognizes the long, winding road ahead before the century is over. “If we want to make progress on disease, we have a long path that starts with fundamental understanding that builds toward a deeper understanding through recognizing what the healthy human body does, and then recognizing how that is altered in disease,” she says. “And that ultimately then leads to the development of drugs, to clinical trials, and interventions. This is a long path and it’s too long a path for any one person to take on their own.”

— Bagley is the senior editor of Endocrine News. He wrote about the link between screen time and snacking and pediatric obesity in the June issue.

For more information on what the Chan Zuckerberg Initiative is working on, go to: https://chanzuckerberg.com/.