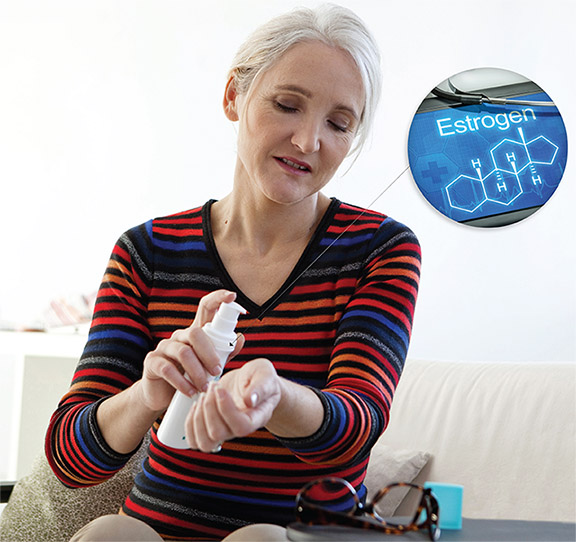 The issue of menopausal hormone replacement therapy (MHT) continues to confuse many clinicians, even though experts and guidelines agree that physicians should not shy away from providing estrogen to treat troublesome symptoms of menopause.

The popularity of using estrogen has been swinging back and forth like a pendulum for decades. Prescriptions went on an upswing with the approval of Premarin for the prevention of osteoporosis in the 1980s and only grew in popularity over the following decade as observational studies suggested benefits such as a protective cardiovascular effect and lower all-cause mortality. At the turn of the century, huge numbers of postmenopausal women were using MHT.

The use plummeted when the initial reports from the Women’s Health Initiative (WHI) were published more than a decade ago. That huge study was begun in the early 1990s to look at the use of estrogen and progestin in healthy menopausal women for the prevention of chronic disease. It was stopped early when initial results indicated an increased risk of invasive breast cancer in some women as well as increases in coronary heart disease, stroke, and pulmonary embolism. These initial reports received great attention from the press, with much less attention paid when further analysis of the data demonstrated that the risks were lower than first reported — and that estrogen alone did not increase breast cancer risk.

A significant difference in effects emerged when results were stratified by age. The risks were greater among older women — those further removed from menopause — and the risk/benefit ratio was much better in younger women — those who could benefit from hormone therapy to treat menopausal symptoms.

What the WHI Didn’t Mean

“The WHI was very important in clarifying that hormone therapy should not be used for prevention of cardiovascular disease, cognitive decline, or other chronic diseases, but the WHI never indicated that hormone therapy should not be used to treat menopausal symptoms,” says JoAnn Manson, MD, DrPH, the Michael and Lee Bell Professor at Harvard Medical School and chief of the Division of Preventive Medicine at Brigham and Women’s Hospital, in Boston. “The WHI results were not intended to be extrapolated to the short-term use of hormone therapy for the treatment of menopausal symptoms in early menopause. But the results were extrapolated very widely to include all women,” by many physicians, media reports, and patients.

“In most cases, for women who are very close to the age of menopause, hormones provide the most relief with the least risk. I prefer them as a first-line agent, because then patients know what maximal relief looks like. Th en if they are going to settle for another treatment because they are afraid or they have been taking hormones for long enough that a risk is beginning to emerge, at least we know what we could do with hormones.”

Some clinicians may be concerned about “black box” warnings, but expert consensus is that hormones offer the best option for many women to alleviate symptoms such as hot flashes, night sweats, vaginal dryness, and pain on intercourse.

“You need to look at the patient’s background, her risks, and her current health status, and balance that against what hormones will do for her,” says Nanette Santoro, MD, E. Stewart Taylor Chair of Obstetrics and Gynecology at the University of Colorado School of Medicine, in Aurora. “In most cases, for women who are very close to the age of menopause, hormones provide the most relief with the least risk. I prefer them as a first-line agent, because then patients know what maximal relief looks like. Th en if they are going to settle for another treatment because they are afraid or they have been taking hormones for long enough that a risk is beginning to emerge, at least we know what we could do with hormones.”

The analyses of the WHI data stratified by age and other evidence have given rise to the “timing hypothesis,” which proposes that the effects of MHT on heart disease and the overall risk-to-benefit ratio depend on a woman’s age and when she starts hormones in relation to her time of menopause. Estrogen therapy may have a more favorable effect in women closer to the age of menopause than in older women.

The evidence for the hypothesis comes from a variety of sources. For example, animal evidence comes from cynomolgous monkeys, which are a good model for humans because of their 28-day cycle and other similarities, says Rogerio A. Lobo, MD, professor of obstetrics and gynecology in the Division of Reproductive Endocrinology at Columbia University. When the monkeys are ovarectomized and fed a high fat diet, they develop atherosclerosis. If they are given hormones immediately, the atherosclerosis is inhibited. But the treatment has no effect if it is delayed and given to older monkeys.

The Elite Play for Keeps

Studies designed to test the timing hypothesis in humans are reporting mixed results so far. The Kronos Early Estrogen Prevention Study (KEEPS) trial tested the effects of two types of estrogen (transdermal and oral) with progesterone against placebo in 720 healthy women who were within three years of menopause. Aft er four years of treatment, there was no difference among the groups in two markers of cardiovascular disease — carotid intima-media thickness (IMT) and coronary calcium. (Lobo, Manson, and Santoro were all principal investigators on the KEEPS trial.)

In contrast, the Early Versus Late Intervention Trial with Estradiol (ELITE) trial was designed to more specifically test the timing of treatment. The trial tested estradiol vs. placebo in some 650 postmenopausal women in two age groups: less than six years after the onset of menopause or at least 10 years aft er. Aft er six years of treatment, younger women who received estradiol had a slower progression of atherosclerosis as measured by carotid IMT than the placebo group. The older women showed no difference. These results are preliminary, but when the final results are published they could have a large impact on increasing the acceptance of the timing hypothesis.

However those studies shake out, experts agree that MHT should not be used for prevention of chronic conditions — but many are concerned that the initial reporting of the WHI results pushed the pendulum so far away from hormone therapy use that today’s younger clinicians did not receive training in its use. Some women report difficulty in finding satisfactory treatment of symptoms.

“In 2000, most of our internal medicine trainees and all the ob-gyn trainees knew everything about hormones and how to give them. Now, there has been a generation that didn’t learn how to give it that sort of says, ‘I don’t know anything about it, so I’m not going to give it,’ ” says Margaret E. Wierman, MD, professor in medicine, ob-gyn, physiology, and biophysics, at the University of Colorado School of Medicine and chief of endocrinology at the Denver VA.

Many clinicians worry that the treatment is “tainted.” “They feel like, ‘As soon as I prescribe it, I am going to see an article next week that is going to make me regret that I did it, so let me just stay away from that,’ ” says Santoro. But that attitude deprives their patients of a beneficial therapy.

A lack of familiarity can be daunting, because hormone therapy involves “a complex balance of benefits and risks,” Manson says. The contraindications include a history of blood clots in the legs or lungs, a history of breast or endometrial cancer, unexplained vaginal bleeding, and a high risk of cardiovascular disease. And treatment should be time limited, with guidelines recommending that five years for estrogen-progestin and seven years for estrogen alone should be adequate for most patients.

“There is really no reason to deny women treatment with hormone therapy when they have significant menopausal symptoms and are appropriate candidates.”

The North American Menopause Society developed a free mobile app and clinical decision support tool called MenoPro with versions for both patients and clinicians designed to facilitate shared decision making. The app’s algorithm takes into account medical history and risk factors as well as personal preferences on hormonal versus nonhormonal treatments. “It helps to assess whether or not a woman is a good candidate for hormone therapy and reviews the options for nonhormonal treatment for those who are not,” says Manson, who helped develop the app. “It encourages clinicians to have women try lifestyle modifications for at least three months before starting pharmacologic therapy.”

“There is really no reason to deny women treatment with hormone therapy when they have significant menopausal symptoms and are appropriate candidates,” Manson concludes.

Seaborg is a freelance writer based in Charlottesville, Va. He wrote about endocrine-related clinical trials in the July issue.