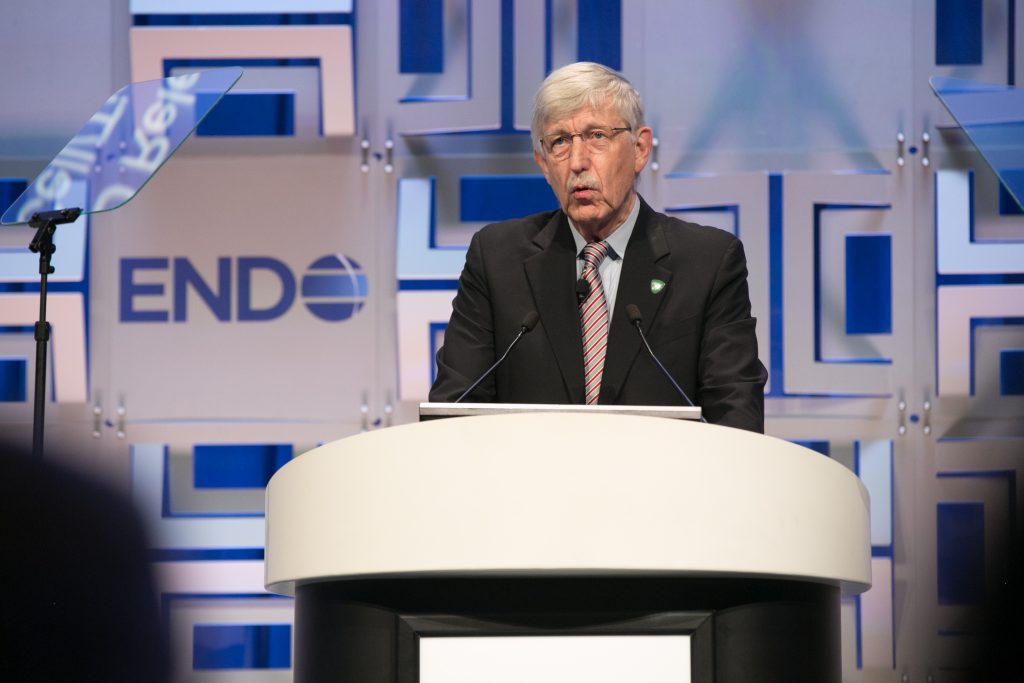 Every ENDO is packed with exciting, groundbreaking science, and of course, one of the highlights each year is the Presidential Plenary. To officially open the proceedings of ENDO 2019 in New Orleans, attendees were fortunate to have Francis S. Collins, MD, PhD, the director of the National Institutes of Health, deliver the Presidential Plenary speech, “Translating Whole Genome Data to Disease.”

On Saturday March 23, there was only one place to be as ENDO 2019 got under way in New Orleans and that was in the New Orleans Theater at the Ernest N. Morial Conference Center. Crowds of eager attendees poured in from every direction to listen to the Presidential Plenary speech by one of the most renowned and high-ranking scientists in the U.S., Francis S. Collins, MD, PhD, director of the National Institutes of Health (NIH), the largest supporter of biomedical research in the world.

Collins is a world-renowned physician and geneticist who has made landmark discoveries of disease genes. He’s perhaps most well-known for his leadership of the Human Genome Project, a 13-year project that set out to map all the genes in the human genome. 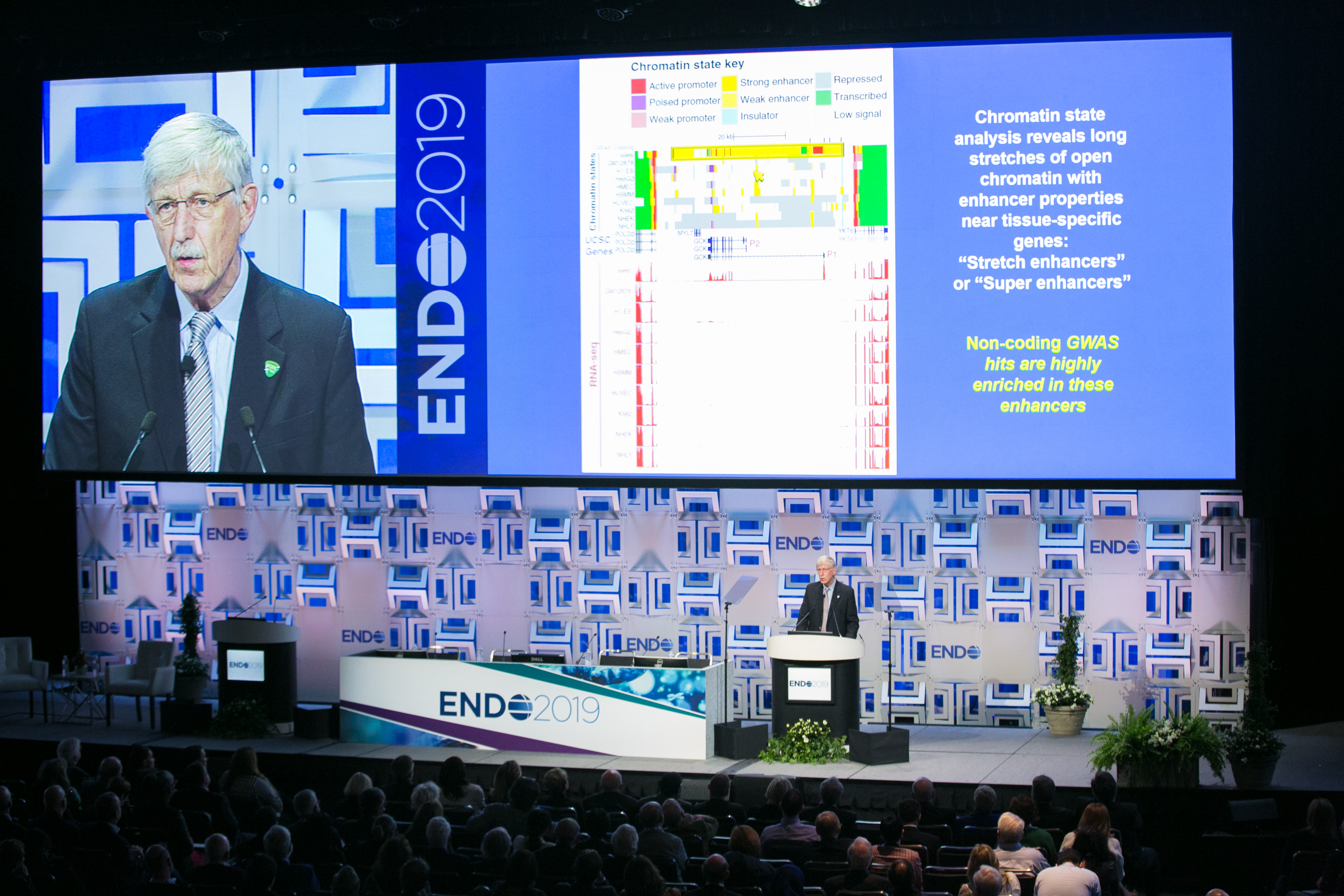 For his presidential plenary talk, Collins touched on three areas that he and his colleagues have been working on, starting with the Human Genome Project and then leading into practical applications for this map of the human genome and what this all means in the modern world of big data. One of Collins’s slides showed the cover of an issue of Nature magazine; the cover line read, “Science in the Petabyte Era.”

“We hear, ‘Well you don’t really have big data problems like the cosmologists,’” Collins says. “We do have big data problems. The amount of information generated by NIH-funded research every day is absolutely breathtaking, and we need to have a way to store it and make it accessible.” He goes to say that it might be a good time for endocrinologists to familiarize themselves with large data sets and maybe even learn some coding, since we’re in the dawn of the time of artificial intelligence and machine learning, tools that physicians will increasingly need to use.

“We already do precision medicine. Think about the glasses you’re wearing or blood transfusions. But in many instances, we are still a one-size-fits-all world. We’d like to change that but to do that you need a lot of data.”

Collins then narrowed his talk down to one practical application – especially interesting to an audience of endocrinologists – type 2 diabetes, a disease dubbed “the geneticist’s nightmare.” “I think we’re beginning to wake up from the nightmare,” Collins says.

Collins and his team at NIH, along with worldwide collaborators, have now identified more than 100 highly statistically significant variants in the genome that are associated with an elevated risk of type 2 diabetes. According to Collins, what they’ve found is that many non-coding genome-wide association study risk variants lie in long stretches called “stretch enhancers,” and that these enhancers are typically tissue-specific and influence the level of expression in nearby genes, but not the nearest ones. “Their effect appears to be mediated by reduction or enhancement of the binding of specific transcription factors,” he says. “These epigenomic findings open up a whole new world of potential therapeutic targets.”

From there, Collins detailed the NIH’s All of Us Research Program, which aims to prevent and treat all common illnesses, not just diabetes, and to bring more precision to medicine. “We already do precision medicine,” he says. “Think about the glasses you’re wearing or blood transfusions. But in many instances, we are still a one-size-fits-all world. We’d like to change that but to do that you need a lot of data.”

All About All of Us

The All of Us Research Program launched in May 2018. It’s a historic, longitudinal effort to gather data from one million or more people living in the U.S. that takes into account individual differences in lifestyle, socioeconomics, environment, and biology. So far, the program has enrolled 200,000 participants. The participants are partners, meaning they can receive every piece of information the program collects on them. The program also sought to enroll at least 50% of participants from groups typically underserved in research, and they have already hit that target.

“Clearly epigenetics is where the action is in terms of gene-environment interactions. If something’s happening in your body because of an environmental exposure, it’s happening perhaps because of a DNA mutation that’s been created if it’s a carcinogen.”

The goal of the All of Us Research Program, Collins says, is to become the largest-ever biomedical resource, which will be able to answer questions like: Are there distinct subtypes of type 2 diabetes? Do polygenic risk scores alter health behavior? What genetic and environmental risk factors contribute to racial or ethnic disparities in risk for type 2 diabetes? What controls progression or lack thereof in individuals with risk of diabetes? What genetic or environmental factors determine risk of developing diabetic nephropathy? What combination of care providers leads to the best outcomes for persons with diabetes?

“A lot of the future is still unclear,” Collins says. “We’re trying to enable it. I hope a group like this will make that dream come true, of enabling a future that gives more and more of an opportunity to people to enjoy full and healthy lives.” 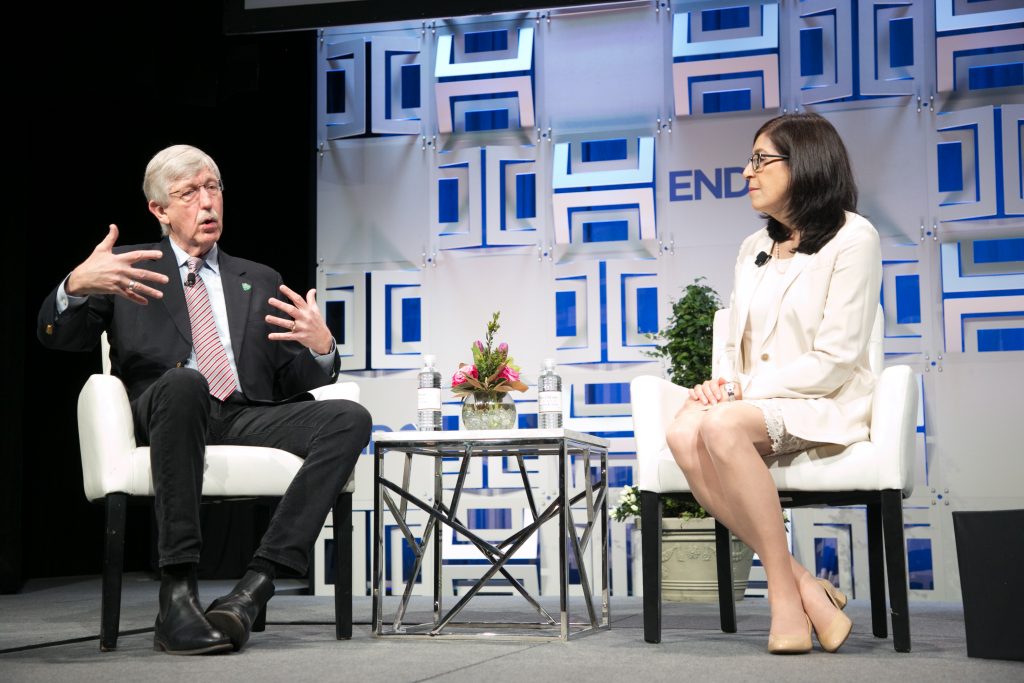 Towards the end of the plenary, Collins sat down with the Endocrine Society’s immediate past-president, Susan Mandel, MD, for a sort of “fireside chat.” Here are some highlights.

MANDEL: “As a practicing physician, as someone who uses [electronic health records], if I have a patient who’s enrolled in All of Us, and especially since we find so many things that as of yet we’re not quite sure what that means, what is the type of conversation that the investigators have with the patient, that I have with the patient? How is that going to work?”

COLLINS: “It’s an opportunity to empower patients to be more engaged in their care, and people who are signing up seem pretty interested in that and glad they’re going to be told the results of the lab studies that are done. They’re going to get results back in terms of biochemistry. They will get back results about genetics. We’re actually piloting that with genetic counselors available to try to help people think it through. It will be our goal to give information to people in a fashion that is interpretable, that they can share with their physician.

“This is going to be an interesting experiment. I think one of the reasons to come and speak to a group like this is to be sure that we’re connecting with practicing physicians about how this could be a real opportunity.”

MANDEL then asked about inheritable and environmentally determined epigenetic factors.

COLLINS: “Clearly epigenetics is where the action is in terms of gene-environment interactions. If something’s happening in your body because of an environmental exposure, it’s happening perhaps because of a DNA mutation that’s been created if it’s a carcinogen. But if it’s just modifying gene expression, that’s going to work through this whole epigenomic pathway. The more we can learn about how that mechanism works and then study it in people who have had specific environmental interactions, the better.”