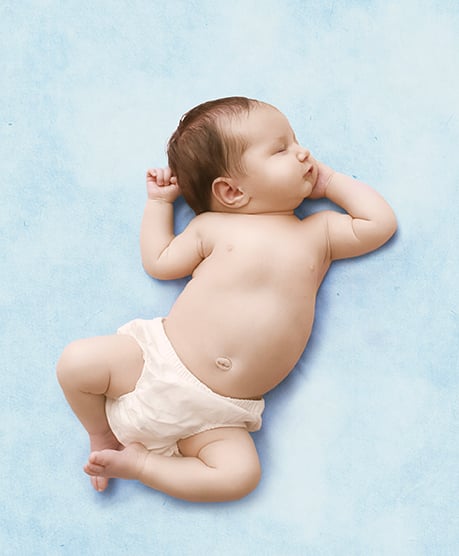 Should imaging be a routine procedure in diagnosing pediatric patients with congenital hypothyroidism? Two pediatric endocrinologists explain their opposing views on this topic to Endocrine News.

In September of last year, during the 10th International Meeting of Pediatric Endocrinology in Washington, D.C., Johnny Deladoëy, MD, PhD, of the University of Montreal, and Stephen LaFranchi, MD, of Oregon Health & Science University in Portland, participated in a “Controversy” session on whether thyroid imaging should be a routine step in the diagnosis and therapeutic planning for congenital hypothyroidism (CH).

Pediatric endocrinologists have yet to settle on the optimal evaluation and care of infants with confirmed CH detected by abnormal newborn screening (NBS) tests, and the use of imaging studies remains controversial. The controversy seems to stem from the debate of whether imaging studies should be a routine part of diagnosis and care, not whether imaging provides any value at all. It’s an important debate, since CH can lead to extreme mental deficits in children, and screening for CH can prevent irreversible intellectual disability.

For Deladoëy, imaging in NBS has two functions:(1) a diagnostic tool able to give an accurate diagnosis and to explain this diagnosis clearly to the parents; and (2) assessment of the quality of the NBS at the population level. “Newborn screening is a success of medicine, allowing us to prevent disabilities by early treatment and follow-up of the newborn with congenital hypothyroidism,” he says. “Given the importance of NBS for CH, it is important to assess its quality, and thyroid imaging is an important benchmark.”

LaFranchi, however, takes issue with the thought that imaging should be a routine step. He argues there are other ways to find out the information you need, and that imaging is not routinely necessary for every infant who tests positive for CH. “I’m going to date myself, but that goes back to 1975 to 1985, we did routine screening,” he says. “But since that experience, we realized it was not information that we needed to do on every case. And so at present, I don’t routinely do imaging.”

If a newborn’s blood test shows elevated thyroid-stimulating hormone (TSH) levels that, of course, means the newborn needs to be evaluated further. LaFranchi says a lot can be gleaned from that test, even determining whether the CH is transient or permanent. “One can determine the likelihood of permanent versus transient almost from the get-go depending on how elevated the TSH is and how low the confirmatory free T4 is,” he says, “so if you had a baby with a free T4 of 0.3 ng/dL, where the normal is 1-4 ng/dL, and the TSH is over 500, the odds are really high this is going to be permanent.”

But relying on blood tests can lead to “circular thinking,” says Deladoëy. “If you confirm this first test by another blood test, it implies that the only criteria of diagnosis is a cutoff point applied on a TSH blood value,” he says. “Cutoffs are variable in all jurisdictions, and therefore when the diagnosis of CH is based only on blood tests (especially for borderline tests), you can have a diagnosis of CH in one place but be healthy if you move to another jurisdiction.”

“Newborn screening is a success of medicine, allowing us to prevent disabilities by early treatment and follow-up of the newborn with congenital hypothyroidism. Given the importance of NBS for CH, it is important to assess its quality, and thyroid imaging is an important benchmark.” — Johnny Deladoëy, MD, PhD, University of Montreal, Montreal, Canada

This circular thinking can lead to over-diagnosis and over-treatment, which would mean more visits to a doctor, which would mean more absenteeism from work and/school. During his presentation, Deladoëy pointed out that there has been an increase in CH incidence and asked what the cost of over-diagnosis and over-treatment is versus the cost of a correct diagnosis. “Imaging can determine whether the CH is due to an anatomical problem or a functional problem,” he says. “At the level of a population, it is important to assess whether an increased CH incidence is due to anatomical or functional problems. This information helps to compare NBS programs even if they use different NBS procedures and cutoffs. It also gives invaluable information about the precise diagnosis; this latter point is important if one wants to define the cause of an increase incidence of CH.” 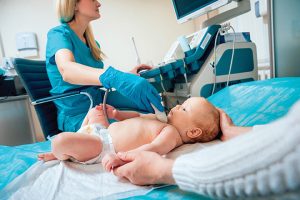 But these questions can also be answered through follow-up according to Endocrine Society and American Academy of Pediatrics guidelines, says LaFranchi, and even if imaging showed different problems (ectopic, aplasia, goiter), physicians would still use the same starting dose of meds. “After a year of age, let’s say a baby outgrows their dose and the TSH, where normal, is under five, if it rises to greater than 10, then you know that’s going to be permanent lifelong treatment,” he says. And if that never happens, patients can stop treatment after three years, since the developing brain has a “critical dependence” on thyroid hormone, beginning before birth. Then, after a month to wait for the medicine to clear out, test again, and if TSH levels are still elevated, it’s confirmed permanent hypothyroidism.

“You might not be able to tell the parents right away the first visit you see them, but eventually you can explain that we’ll be able to tell whether this is permanent versus transient,” LaFranchi says.

“More than a Thousand Words”

For both of these pediatric endocrinologists, the debate of “To Routinely Image or To Not Routinely Image” involves the issue of patient education and compliance, as well as personalized medicine. Deladoëy says that an image is an extremely useful tool in making sure these parents know exactly what they’re up against. He tells the story of one of his patients whose mother was very reluctant to give thyroxine replacement to her child until she could see her child’s thyroid ectopy with her naked eye (after a period of undertreatment), something that might have been prevented had she seen the ectopy on sodium pertechnetate scanning at diagnosis in the newborn period. “One image reveals and explains more than a thousand words,” he says.

“I think that individual practitioners, individual pediatric endocrinologists should decide what best fits their practice. But my take is, this point of view that ‘Imaging should be done and you’re doing the wrong thing if you don’t do routine imaging.’ That’s not correct.” — Stephen LaFranchi, MD, Oregon Health & Science University, Portland, Ore.

LaFranchi says that is not an unreasonable position, but in his practice, he finds it as useful to sit down with the family and explain the importance of thyroid hormone and brain development. “We say, ‘The tests show that your baby is not making enough thyroid hormone. If you don’t give this medicine every day and get your refills on time so you don’t run out, you run the risk of causing brain damage.’ And we put it in writing, and most families are persuaded by that argument,” he says. But, he says, he would perform an imaging study on a newborn if the parents requested it.

Doctors Should Be Cautious

During his presentation, Deladoëy said that all he sees are benefits when it comes to routinely imaging for CH. “Besides crucial information to assess the overall quality of an NBS program, thyroid imaging gives an accurate diagnosis,” he says. “It helps for discussion with the parents; the parents can see the image and really understand why we, the doctors, want to treat their babies.” Physicians can determine whether the CH is transient and reassure the parents about their children’s future, or if the CH is permanent, start making plans for genetic counselling for the child and subsequent siblings (the recurrence risk being 25% for functional disorders and only about 1% for developmental anomalies). “That’s a lot of benefits for an imaging that is currently available in many medical centers in North America and for a very reasonable price,” he says.

For LaFranchi, it’s the word “should” that comes before “routinely image” that put him in the “opposes” slot of this session, although he’s not opposed to imaging, he just feels doctors should be cautious. “I think that individual practitioners, individual pediatric endocrinologists should decide what best fits their practice,” he says. “But my take is, this point of view that ‘Imaging should be done and you’re doing the wrong thing if you don’t do routine imaging.’ That’s not correct. If you think the information might be helpful for all the reasons we just talked about, including improving adherence to daily treatment. But if you feel comfortable and confident that you can treat this patient, and ensure daily adherence without it, then you can forgo it.”

— Bagley is the senior editor of Endocrine News. He wrote the comprehensive Progress Report in the December issue.