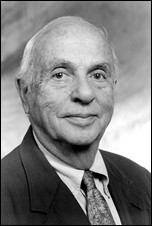 Lewis Braverman, MD, will be dearly missed by countless number of former fellows, colleagues and friends.

Braverman, most recently a professor of medicine at Boston University School of Medicine and chief of the Section of Endocrinology, Diabetes, and Nutrition, was an internationally recognized leader in the field of thyroid research for his contributions that spanned over six decades.

Examples of his contributions include studies leading to the understanding of the Wolff-Chaikoff effect; the demonstration of peripheral conversion of T4 to T3 and to other iodinated products; description of iodine deficiency in the U.S. and worldwide; and the recognition of amiodarone-induced thyroid dysfunction, among several other important contributions. He published over 500 peer-reviewed manuscripts on the topics of iodine metabolism and thyroid dysfunction. He also served as editor for several editions of Werner and Ingbar’s The Thyroid.

Braverman was a warm and caring individual who gave so much of his time to his patients, trainees and colleagues. He was a gentle giant of his time and will be missed by all who were fortunate to have known him.

In 1951, Braverman completed his undergraduate degree in biology at Harvard College followed by medical school at Johns Hopkins University in 1955. He returned to his hometown of Boston to complete his internship at the Beth Israel Hospital followed by two years of military service in France. He returned to Boston to complete residency at the Harvard Unit at Boston City Hospital and joined the prestigious Thorndike Laboratory under the direction of Dr. Sid Ingbar. He subsequently served as chief of endocrinology at Tufts St. Elizabeth’s Hospital (1962-1975), chief of endocrinology at University of Massachusetts Medical Center (1975-1998), and then chief of endocrinology at Boston University in 1999 where he remained as a faculty member until his retirement in 2017.  He valued patient care and kept a busy thyroid practice throughout his academic career. He had a special ability to connect with his patients who followed him throughout his career at different institutions.

Through the years, Braverman provided outstanding service to the Endocrine Society. He was the editor-in-chief of The Journal of Clinical Endocrinology & Metabolism from 1989 to 1993. In 2007, he was recognized with the Endocrine Society’s Robert H. Williams Distinguished Leadership. He was also an integral part the American Association of Clinical Endocrinologists and the American Thyroid Association (ATA), where he received numerous awards and served as president.

He enjoyed mentorship of fellows and junior faculty. He served as mentor on numerous National Institutes of Health career development awards, dissertation committees, research projects, and manuscripts. His former trainees span the globe and include several endocrinology chiefs and senior academic faculty. His door was always open for fellows and faculty to discuss new projects, to manage challenging patients, and to provide career advice. He always took the time to get to know trainees and colleagues on a personal level. He drew large crowds at every endocrine meeting that he attended where former fellows and colleagues queued in line to greet him.

Braverman was a warm and caring individual who gave so much of his time to his patients, trainees and colleagues. He was a gentle giant of his time and will be missed by all who were fortunate to have known him.