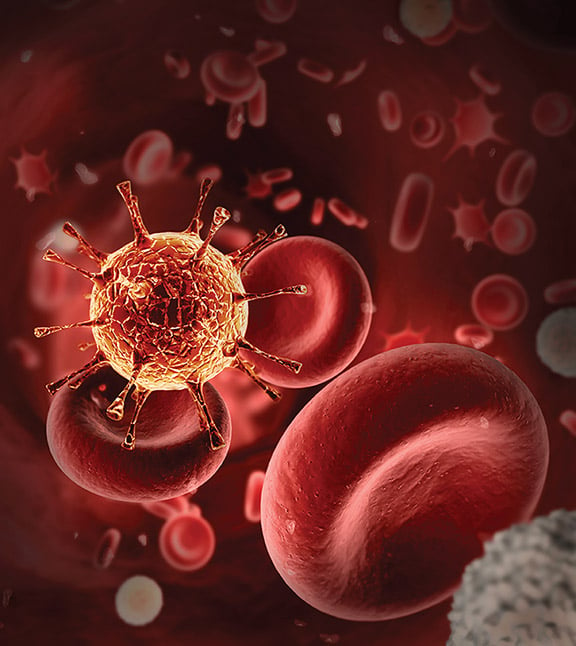 As HIV-positive patients live longer, their risk for developing diabetes has increased along with their lifespans. Treating both of these conditions concurrently is challenging, but as with any other patient, lifestyle modification is a crucial component.

Last year, Max Pemberton, a psychiatrist in the United Kingdom’s National Health Service and a regular columnist for a number of publications, wrote an op-ed in The Spectator titled “As a doctor, I’d rather have HIV than diabetes.”

Pemberton makes the case that HIV has become a manageable chronic disease, and people with the disease have about the same life expectancy as healthy people. He writes that HIV is “regarded in public health terms in the same category as, for example, type 2 diabetes,” but goes on to say that the prognosis for patients with T2D is much worse for those with HIV. The article raised some eyebrows, publicly and in the medical community, with some disagreeing with Pemberton because HIV and T2D are contracted and treated in very different ways.

It’s certainly a controversial viewpoint, and given the choice of the two diseases to have, it’s up for debate. HIV numbers are holding steady: According to the Centers for Disease Control and Prevention (CDC), there were 1.2 million people ages 13 and older in the U.S. with HIV at the end of 2012, and about 27,000 living with stage 3 of HIV (AIDS), but these people are living longer now that advances have been made in the past 30 years. Meanwhile, diabetes numbers continue to climb. The CDC estimates that there are now 29 million people with diabetes and 86 million with prediabetes, and most experts believe those numbers will continue to rise.

“The global gains that have been made in drastically reducing mortality from HIV/AIDS means that millions of infected people are living longer,” says Sam Dagogo-Jack, MD, a professor of medicine and the director of the Division of Endocrinology, Diabetes, and Metabolism at the University of Tennessee Health Science Center, and president of the American Diabetes Association. “And, with aging comes the associated morbidities such as diabetes, heart disease, degenerative, and neoplastic disorders.”

So for some there is no choice, and that means living with both dangerous diseases, while their physicians must treat both diseases in concert.

A diagnosis of HIV might not be a death sentence anymore, but complications still abound. Treatments vary by patient, and even when the correct course of treatment is found, the side effects can start to outweigh the benefits. Indeed, a possible side effect of some highly active antiretroviral (HAART) medications taken by patients with HIV is an enhanced risk of developing T2D.

“In addition to the age-related increase, the risk of diabetes is significantly increased by exposure to HAART,” Dagogo-Jack says. “Components of the HAART regimens, including but not limited to the protease inhibitors, have been convincingly associated with increased risks of diabetes. With some of the drugs, congruent mechanisms (such as molecular interference with insulin action and impairment of insulin secretion) leading to glucose dysregulation have been demonstrated in experimental models as well in humans.”

“The global gains that have been made in drastically reducing mortality from HIV/AIDS means that millions of infected people are living longer. And, with aging comes the associated morbidities such as diabetes, heart disease, degenerative, and neoplastic disorders.”

— Sam Dagogo-Jack, MD, professor of medicine, director of the Division of Endocrinology, Diabetes, and Metabolism at the University of Tennessee Health Science Center, president of the American Diabetes Association

Some standard therapies, like statins, become less effective in HIV-positive patients, either through side-effect profiles that are not tolerable, or by interacting with and altering the metabolism of combined antiretroviral therapy (cART) medications. These can lead to ineffective cART or enhanced drug toxicities. “Most importantly,” says Kevin Yarasheski, PhD, a professor of medicine, cell biology and physiology, and physical therapy in the Division of Endocrinology, Metabolism, and Lipid Research at Washington University in St. Louis, Mo., “standard therapies don’t typically target the presumed underlying problem — residual immune cell activation and inflammation — and thus may not successfully treat diabetes and other cardiometabolic complications.”

Physicians have to make certain that anti-diabetes drugs do not compromise an HIV-positive patient’s immune and virologic status. “Doing so might allow the virus to mutate and become even more difficult to treat, and can reduce protection against potentially fatal opportunistic infections,” Yarasheski says.

Again, people living with these chronic diseases in tandem have to be treated differently, often depending on how and when they developed each one (prediabetic who contracted HIV, hyperglycemic aft er the start of HIV therapy, etc.). The risk factors for T2D in the general populace (family history, overweight/obesity, habitual inactivity, hypertension, dyslipidemia, and so on) apply equally to HIV-infected patients. Early clinical encounters should document the presence of any diabetes risk factors.

Additional risks from HIV should also be recognized, but according to Dagogo-Jack, the appropriate focus should be on containment of the virus. “Where a regimen is effective in suppressing viral load, boosting CD4 counts and warding off opportunistic infections,” he says, “it would not be prudent to switch or substitute HIV medications on account of risk or even occurrence of incident diabetes. In my opinion, any HAART-emergent diabetes can be managed effectively with available medications.”

One of the first and most important steps for the patient should be lifestyle modification. Dagogo-Jack says that weight gain following initiation of HAART was a strong predictor of incident diabetes. He points to a 2015 article in HIV Medicine by Amit Acchra, PhD, of the University of New South Wales, Australia, that found an 11% increased risk of diabetes for each one-unit increase in BMI. “That’s a powerful opportunity for primary prevention with lifestyle intervention, as weight gain occurs frequently following successful treatment of HIV. There’s real opportunity for clinical researchers to translate well-known diabetes prevention initiatives in this particular population.”

Physicians should also be on the lookout for HIV and T2D complications that can mimic each other. For instance, nephropathy is present in both diseases. However, the time course, evolution, and magnitude of proteinuria and other features should help differentiate the two conditions. “In our practice,” Dagogo Jack says, “referral for expert nephrology opinion is the rule whenever the picture does not fit snugly with classical diabetic nephropathy.”

Yarasheski’s team has been looking at drugs to cut down on these complications risks, namely inflammatory responses in HIV-positive patients that lead to diabetes and other cardiometabolic problems. In a study published in The Journal of Clinical Endocrinology & Metabolism earlier this year, they found that sitagliptin improved glucose metabolism and reduced inflammation in HIV-positive adults taking antiretroviral therapy. “We believe that people living with HIV are exposed to multiple pro-inflammatory activators or processes,” Yarasheski says.

According to Yarasheski, residual HIV replication persists in certain immune cell reservoirs and potentially other reservoirs that are not cART accessible. In these host immune cell sanctuaries, chronic immune cell activation and inflammatory processes persist and augment the pro-inflammatory states associated with cardiometabolic complications. In addition, immune cell activation localized to regions like the gut may compromise gut integrity, releasing gut bacteria and other microbes into the circulation.

“These are also associated with a host of downstream, pro-inflammatory events that may exacerbate cardiometabolic disease risk among people living with HIV,” he says. “Finally, many HIV-positive people are living to be around 70 years old, and advanced age is associated with enhanced pro-inflammatory processes that might respond to sitagliptin or other ‘anti-inflammatory’ interventions.”

Yarasheski and his team tested sitagliptin because preliminary reports had shown it to be safe, did not have a serious adverse event profile, and did not interact with cART medications or their metabolism. They also found that the drug could possibly lower glucoregulatory hormones during an oral glucose tolerance test in HIV-positive adults with T2D. Th e hope is that sitagliptin could become an add-on therapy for people living with HIV and T2D who are already receiving first-line anti-diabetes medications but not achieving glucose control or hemoglobin A1c goals. But there’s work to be done, and more studies are needed before that can happen.

Of course, the ultimate hope and end goal is for a cure for both of these diseases or a vaccine that prevents the transmission of HIV or the development of T2D, but that may be a long way off yet.

Dagogo-Jack says he has seen an increased awareness of patients living with HIV and T2D, but whether such knowledge has been actionable is open to question. “What I perceive from colleagues in the field is an expectation of a ‘cheat sheet’ of HIV drugs arranged in a hierarchy of ‘best for diabetes’ to ‘worst for diabetes,’” he says. “Initial experience fostered an understanding that the protease inhibitors were driving all the increased risks for insulin resistance and diabetes. Subsequent refinements in knowledge have now implicated a broader array of HIV drugs as posing a risk for diabetes. Given my aforementioned reservation about switching medications on account of diabetes risk and the unlikelihood that a credible ‘cheat sheet’ hierarchy of HIV medications can be developed, clinicians need a different mindset.”

Dagogo-Jack notes that the estimated incidence of HAART-emergent diabetes ranges from 5.7 to 47.0 cases per 1,000 person-years and that the higher end came from older estimates with limited samples and the lower end estimates came from more recent larger databases so they may be closer to the truth. “With a working estimate of approximately 10 cases per 1,000 person-years, the majority of HIV patients receiving antiviral treatment would not develop diabetes,” he says.

Therefore, he sees risk profiling as beneficial. A family history of diabetes along with being overweight or obese before treatment, or evidence of early weight gain with initiation of HAART should trigger referral for aggressive dietary modification and physical activity counseling, Dagogo-Jack says. “Admittedly,” he continues, “these measures would be taken on empirical grounds, pending availability of large-scale multi-center data from effectiveness studies.”

Yarasheski plans to further investigate the potential beneficial actions of sitagliptin in people living with HIV and experiencing residual immune cell activation, inflammation, glucoregulatory defects, as well as several other end-organ complications (vascular inflammation, NAFLD, bone demineralization, neurocognitive deficits) for which pre-clinical data suggest that sitagliptin and/or better glucose control might exert a beneficial effect in humans. He anticipates more effective, less metabolically toxic anti-HIV drugs being developed and introduced to the market, and he says that we need worldwide distribution and availability of all anti-HIV medications, especially in low- and middle-income countries where the rates of HIV infection are much greater than in the U.S.

Bagley is the associate editor of Endocrine News. He wrote about treating type 1 diabetes and eating disorders in the October issue.