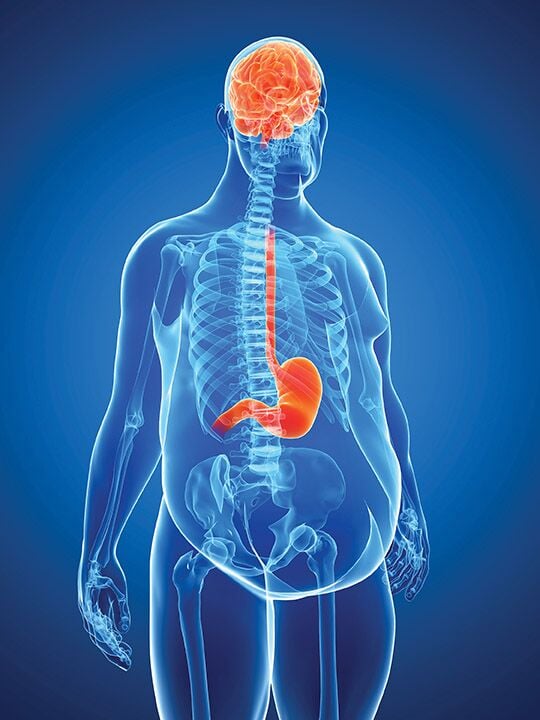 Studies presented at ENDO 2017 in Orlando or published in the Journal of the Endocrine Society all reveal how obesity is the greatest threat to the health of the young. Fortunately, endocrine science is close to finding answers on how to prevent this epidemic.

According to the 2013–2014 National Health and Nutrition Survey, pediatric obesity affects 17.2% of children ages two to 19 years and overweight another 16%, defined as body mass index (BMI) ≥95th percentile and 85–95th percentile, respectively. In the adolescent population, the rate of obesity and overweight has tripled since the 1970s, making this health problem and its pathogenesis one of paramount importance. Not only does it affect the health of the child, it confers enormous risk for developing grave comorbidities on through adulthood.

According to the 2013–2014 National Health and Nutrition Survey, pediatric obesity affects 17.2% of children ages two to 19 years and overweight another 16%, defined as body mass index (BMI) ≥95th percentile and 85–95th percentile, respectively. In the adolescent population, the rate of obesity and overweight has tripled since the 1970s, making this health problem and its pathogenesis one of paramount importance. Not only does it affect the health of the child, it confers enormous risk for developing grave comorbidities on through adulthood.

“Without a better understanding of the relative importance of neurobiological and cognitive factors in the development and persistence of childhood obesity, we may be unable to effectively reverse the obesity epidemic and reduce the health and related burdens of this problem.” – Christian Roth, MD, of Seattle Children’s Research Institute and University of Washington

In April, three presentations at ENDO 2017 in Orlando focused on the problem of overweight and obesity in children and adolescents, underscoring the need for further clinical research and understanding it demands. A fourth related study from the U.K. is also included here. The complexities cannot be underestimated, as these studies demonstrate, exploring cardiovascular, metabolic, and neurologic pathways and their clinical implications. Marisa Censani, MD, director of the Pediatric Obesity Program at Weill Cornell Medicine and New York Presbyterian Hospital and one of the ENDO 2017 presenters, put it this way: “As pediatric endocrinologists, our goal is to address obesity and its comorbidities and to serve as advocates for the future health of our patients.”

Censani’s study, “Vitamin D Status Is Associated with Early Markers of Cardiovascular Disease in Children and Adolescents with Overweight and Obesity,” is one of the first to assess the relationship of vitamin D deficiency with both lipoprotein ratios and non–high-density lipoprotein cholesterol (non-HDL-C), which are lipid markers known to impact cardiovascular risk, in children and adolescents with obesity/overweight.

Knowing that impaired vitamin D status disrupts the cardiometabolic pathways in adults and that elevated serum non-HDL-C levels in childhood increase risk for cardiovascular disease in adulthood, her team investigated whether a connection exists between vitamin D status and specific lipid markers in a two-year cross-sectional study of 60 children and adolescents, ages six to 17 years, who met criteria for obesity/overweight (body mass index [BMI] >85th percentile). 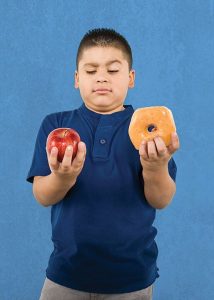 “Our findings strongly suggest that vitamin D deficiency may have a negative effect on lipid parameters with increase in cardiovascular risk among individuals with low vitamin D levels,” Censani says. Although the exact mechanism is unclear, proposed hypotheses include that vitamin D, being fat soluble, becomes less available in the setting of increased adipose tissue and that children with obesity may be more sedentary and therefore less inclined to be outside, where they would otherwise derive vitamin D from sunlight.

The take-away message for clinicians is clear: “These results support screening all children and adolescents with obesity and overweight for vitamin D deficiency and the potential benefits of improving vitamin D status to reduce cardiometabolic risk,” Censani says. “Although further research into both short-term and long-term effects of vitamin D repletion, is needed, early intervention might improve cardiometabolic markers and help to ensure a healthy future.”

In “Pathogenesis of Type 2 Diabetes in Obese Adolescents: Metabolites of Serotonin and Mitochondrial Function in 24-Hour Urine Samples,” also presented at ENDO 2017, Pinar Gumus Balikcioglu, MD, of Duke University Medical Center and Lenox Baker Children’s Hospital in Durham, N.C., and team sought to zero in on what metabolic factors predispose an obese child to insulin resistance and glucose intolerance, given that only half of obese youth are insulin resistant and only a fraction of those develop type 2 diabetes. In previous studies, they used fasting plasma samples to characterize metabolic markers of insulin resistance in obese adolescents. By contrast, this study used non-targeted metabolic profiling of 24-hour urine samples, which integrates differences in metabolic status throughout the day and night, to characterize metabolic differences in obese youth with and without type 2 diabetes.

“Little is known about the metabolic factors predisposing to insulin resistance and type 2 diabetes in obese children,” Balikcioglu says. “To identify those at highest risk, it is essential to characterize metabolic markers that predict the development of insulin resistance and glucose intolerance.” Analyzing 24-hour urine samples using gas chromatography/mass spectrometry from 33 obese African American children ages eight to 18 years, 13 with type2 diabetes, researchers identified three metabolites significantly higher in those with type 2 diabetes that signify mitochondrial dysfunction, and therefore reduced energy production, and one that was much lower–5-hydroxy-indoleacetic acid (5-HIAA), the major metabolite of serotonin. “This finding is particularly interesting given that serotonin increases pancreatic β-cell replication, β-cell mass, and glucose-dependent insulin secretion, Balikcioglu says.

Their findings implicate impaired serotonin metabolism and mitochondrial dysfunction in type 2 diabetes pathogenesis through inhibition of insulin secretion. Future studies may find other novel factors that would help predict the development of insulin resistance and progression to type 2 diabetes in people at risk. “Validation of urine metabolomic profiling could provide a new non-invasive approach to identification of biomarkers for metabolic risk,” Balikcioglu says, “while analysis of serotonin metabolism may provide new therapeutic approaches for type 2 diabetes prevention and treatment.”

In “Body Mass Index and Incident Type 1 and Type 2 Diabetes in Children and Young Adults: A Retrospective Cohort Study,” published in the Journal of the Endocrine Society, Ali A. Abbasi, MD, PhD, who was with King’s College in London, U.K., at the time the research was published, and team also explored the association of obesity with diabetes in children. Using data from 375 general practices in the U.K. from 1994 to 2013, researchers looked for diagnoses of type 1 diabetes and type 2 diabetes among 369,362 obese or overweight participants aged two to 15 years. “We found that there has been a rapid increase in type 2 diabetes in children and young adults. Children who are obese have a fourfold increase in risk of type 2 diabetes,” Abbasi says. No association was found between obesity and type 1 diabetes.

Their next research steps will explore potential targets for the prevention of childhood obesity and early-onset type 2 diabetes. “In our follow-up study, we have planned to expand the population, risk factors, and the outcomes, analyzing the burden (prevalence) and incidence of both type 1 and type 2 diabetes and their associations with sociodemographic characteristics (like ethnicity, smoking, and alcohol use),” Abbasi says. “Preventing obesity and diabetes should be a top priority for everyone concerned with the health of future generations.”

Christian Roth, MD, of Seattle Children’s Research Institute and University of Washington presented “Post-Prandial Brain Response to High-Calorie Visual Food Cues Is Greater in Obese Vs. Lean Children” at ENDO 2017, a study that investigated why lifestyle interventions do not produce favorable outcomes in some children with obesity. “Without a better understanding of the relative importance of neurobiological and cognitive factors in the development and persistence of childhood obesity, we may be unable to effectively reverse the obesity epidemic and reduce the health and related burdens of this problem,” Roth says. Using functional magnetic resonance imaging (fMRI), Roth’s team measured brain activation in 34 children with obesity and 21 children with normal weight, all aged nine to 11 years to find out whether differences in the central satiety response exist between obese and non-obese children. A secondary outcome was determining whether the strength of the central satiety response is associated with impulsivity and/or the success of obesity treatment among obese children.

Participants viewed images of high- and low-calorie foods as well as non-food objects while undergoing fMRI, then ate a test meal consisting of 33% of estimated daily caloric needs, which was followed by a second fMRI scan. They next ate a buffet-style meal composed of what they chose. Researchers found similar levels of brain activation after the first fMRI and self-reported satiety after the buffet meal in both the obese and non-obese groups. It was after the test meal that differences emerge, as higher overall brain response to high-calorie foods was seen in the obese children, suggesting that, “in obese children, a blunted central nervous system satiety response impairs the success of obesity interventions,” Roth says.

“Little is known about the metabolic factors predisposing to insulin resistance and type 2 diabetes in obese children. To identify those at highest risk, it is essential to characterize metabolic markers that predict the development of insulin resistance and glucose intolerance.” – Pinar Gumus Balikcioglu, MD, Duke University Medical Center and Lenox Baker Children’s Hospital, Durham, N.C.

A follow-up study will report the results of a six-month intervention with the group of obese children, consisting of family-based behavioral treatment (FBT), the success of which depends in part on parental control and participation and in part on the child’s own obesity-related cognitive traits, such as low responsiveness to internal satiety signals, impulsivity, high responsiveness to external food cues, and level of satisfaction when eating high-calorie foods. “We expect that our study findings will inform ways FBT might be modified to improve outcomes for all children or how FBT might be modified for particular children (e.g., targeting self-control),” Roth says. The follow-up study will use a U.S. Preventive Services Task Force-recommended weight-loss protocol focusing on food and exercise education and behavioral skills accompanied by the Spotlight Diet eating plan (foods are categorized into green, yellow, and red groups, with green signifying “go”; yellow, “proceed with caution”; and red, “stop” — eat sparingly).

“The current study, having provided a basic understanding of brain satiety function and how children’s perceptions of high-calorie environmental food cues are altered by eating, will help tailor this intervention and potentially improve treatment response in the future,” Roth says. “We expect that the gained insights will be integrated in a clinical context that will impact the prevention and treatment of childhood obesity.”

– Horvath is a freelance writer based in Baltimore, Md. She wrote about a side benefit of menopausal hormone therapy on women’s bone strength in the May issue.