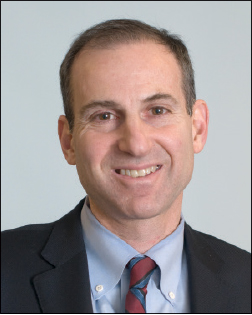 Steven Grinspoon, MD, is the Endocrine Society’s selection for the 2016 Gerald D. Aurbach Award for Outstanding Translational Research. After graduating from Cornell University, Dr. Grinspoon attended the University of Rochester School of Medicine and completed his residency in internal medicine at Columbia-Presbyterian Hospital. He then did an endocrinology fellowship at Massachusetts General Hospital (MGH), focusing on neuroendocrinology with his mentor Anne Klibanski. Dr. Grinspoon is currently professor of medicine at Harvard Medical School and director, Program in Nutritional Metabolism at MGH.

Dr. Grinspoon’s long-standing focus has been to understand the neuroendocrine regulation of body composition in HIV, with a focus on how it relates to the growth hormone (GH) axis. His work in HIV lipodystrophy started with a clinical finding. In his clinic, Dr. Grinspoon was impressed with altered fat distribution in several patients with HIV infection. Further investigation led to the seminal work in characterizing lipodystrophy in such patients. He hypothesized that augmentation of GH pulse amplitude with GHRH would reduce visceral fat and improve metabolic abnormalities in HIV lipodystrophy. His work led the FDA to approve Tesamorelin for HIV lipodystrophy in 2010. In follow-up studies, he has shown that Tesamorelin significantly reduces hepatic fat by 40% as assessed by spectroscopy among HIV-infected patients with lipodystrophy. Indeed, the use of Tesamorelin is the first strategy shown to reduce hepatic fat in the HIV population.

These studies demonstrate Dr. Grinspoon’s ability to take a finding from bedside to bench, and back to bedside. In addition to his clinical research successes, he has been an active educator and mentor in clinical investigation; he has mentored over 25 trainees who have gone on to academic careers, the majority of whom are actively involved in clinical investigation. This demonstrates Steve’s dedication to training and mentorship.

About the Award
The Gerald D. Aurbach Award for Outstanding Translational Research is presented in recognition of outstanding research that accelerates the transition of scientific discoveries into clinical applications. Translational research supported with this award will typically involve expertise, collaboration, and engagement across disciplines. Supported by the Gerald D. Aurbach Memorial Fund.