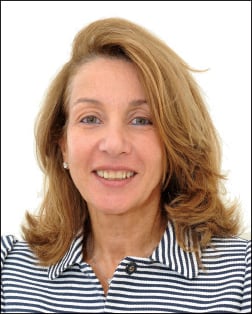 El-Hajj Fuleihan obtained her MD degree from the American University of Beirut (AUB), Lebanon. She completed her residency and fellowship at the New England Deaconess and Brigham and Women’s Hospitals (BWH), Harvard Medical School, with a subspecialty in metabolic bone diseases under the mentorship of Edward Brown. She pursued a Master in Public Health, Clinical Effectiveness concentration, from the Harvard School of Public Health. Post-training, she directed the Calcium Metabolism Research Unit at BWH prior to moving back to her alma mater in 1997. Despite limited resources and major challenges in the region, Dr. El-Hajj Fuleihan has since, and continues to, relentlessly spearhead major capacity building initiatives to advance research, education, and care in the region. Her program is the nucleus for the conduct of original research projects, on osteoporosis and hypovitaminosis D, of major relevance to the Middle East, and it holds a rich publication record. It is home to many post-doc trainees, several of whom followed a similar path, and currently hold junior positions in major academic centers in the U.S. and the region.

Dr. El-Hajj Fuleihan led the IOF Middle East Africa osteoporosis audit, spearheads the National Task Force for Metabolic Bone Disorders, the FRAX Lebanon calculator, and leads/partakes in national and international osteoporosis guidelines. She directed the development and finalization of the blueprint, governance structure, and policies for the University’s Human Research Protection Program, and its Clinical Research Institute. Dr. El-Hajj Fuleihan was awarded a five-year grant to launch the Scholars in HeAlth Research Program (SHARP). SHARP allows trainees enrolled from Lebanon and the region to pursue an intense summer certificate and a master degree in quantitative methods in health research in non-communicable diseases. Dr. El-Hajj Fuleihan received prestigious awards and is member of the Alpha Omega Alpha medical honor society.

About the Award
The International Excellence in Endocrinology Award is presented to an endocrinologist who resides outside of the United States, who has made exceptional contributions to the field of endocrinology in geographic areas with underdeveloped resources for endocrine research, education, clinical practice, or administration. These may include non-traditional activities with substantial local impact to his/her own country and/or internationally. Sponsored by the Endocrine Society.