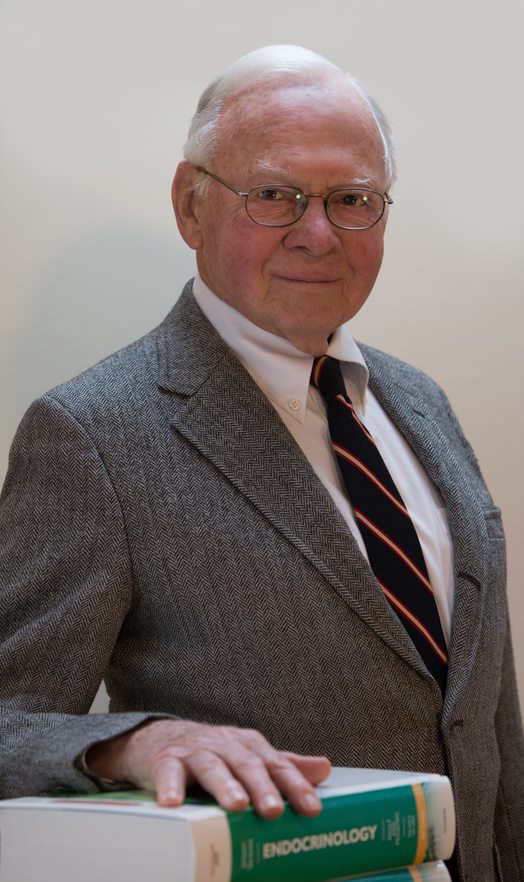 The world of endocrinology lost one of its most influential and charismatic leaders on October 23, 2018, when Leslie De Groot passed away, having led a very full and impactful life. Leslie’s career touched every dimension of endocrinology, but he focused most intensely on thyroidology. His research and publications spanned genetics, thyroid metabolism, thyroid hormone action, autoimmunity, and thyroid cancer.

Leslie came to the field of endocrinology via the National Cancer Institute, following a well-trodden path of physician-scientists who fulfilled public service at the NIH, became entranced with investigation, and dedicated their careers to biomedical research. In a career-changing experience, he joined John Stanbury’s Thyroid Unit at the Massachusetts General Hospital and later at the Massachusetts Institute of Technology (MIT). Leslie imprinted on Stanbury’s style of rigorous research, an engaging writing style, global investigation, and leadership. The Stanbury lab was populated by international giants of endocrinology, including Aldo Pinchera, Jacques Dumont, Samuel Refetoff, Geraldo Medeiros-Neto, and Reginald Hall, among many, many others. This experience cemented Leslie’s deep interest in thyroidology. It also opened his eyes to an international community that he embraced through his life-long collaborations, sabbaticals, and travels.

Leslie might well have been the prototype for the “world’s most interesting man.” He combined scientific exploration with a strong moral compass, and he was often the center of attention in any debate or social gathering.

Leslie and his incomparable wife, Helen, were prominent on the international scene. They traveled to Afghanistan soon after being married to serve as medical missionaries. They opened their home to visiting scientists and trainees. They organized social activities at meetings of the American Thyroid Association (ATA) and the Endocrine Society. Leslie might well have been the prototype for the “world’s most interesting man.” He combined scientific exploration with a strong moral compass, and he was often the center of attention in any debate or social gathering. Leslie insisted that his books be available throughout the world. He catalyzed this principle by inviting an international group of editors and authors for his texts, and ultimately, insisting that his online books be available for free.

Most of Leslie’s academic career was spent at the University of Chicago. He moved there during the tumultuous time of the 1968 political and social protests. He and Helen settled in, and fit in, to Hyde Park. At the University of Chicago, he developed an acclaimed Thyroid Unit, and helped to build one of the most outstanding Endocrinology Sections in the country. Among many pioneering studies, he and his collaborators examined the importance of external radiation as a risk factor for thyroid cancer.

In addition to research that resulted in more than 450 publications and his major leadership accomplishments, Leslie’s most lasting legacy might be his authoritative medical textbooks. These books evolved through three major phases. His first classic, The Thyroid, was written in the voice of a master clinician teaching at the bedside. The text described patient presentations in vivid detail and outlined expert approaches to management. His second classic, Endocrinology, now in its seventh edition, is a multivolume, comprehensive text, written in an evidence-based style by hundreds of international experts. His third foray involved online publishing, including www.endotext.org and www.thyroidmanager.org. These comprehensive, continuously updated sources were intended to provide unimpeded access to clinicians, students, and patients throughout the world. They are a marvelous combination of Leslie’s passion for rigorously curated information and a commitment to improve health globally. Anyone who has attended ENDO in recent years is likely to have encountered Leslie at his exhibition booth, spreading the word about the availability of these valuable resources.

Leslie was an outstanding clinician, dedicated to his patients. He was omnivorous in his interests, whether in endocrinology, history, literature, or politics. The gleam in his eye was never brighter than when interacting with trainees. He provided service unselfishly on committees, journals, and leadership roles in the American Thyroid Association (ATA) and Endocrine Society. He served as president of the ATA, on the Council of the Endocrine Society, as an associate editor of the New England Journal of Medicine, and on the editorial boards of many journals. He was recognized with numerous lectureships and awards, including the Distinguished Educator award from the Endocrine Society. Leslie De Groot cherished his family, friends, sailing, and socializing. On behalf of his many friends, patients, trainees, and colleagues, we can treasure his positive impact on all of us. We have lost a giant in endocrinology, but he leaves an indelible mark on our field and a warm place in our hearts.