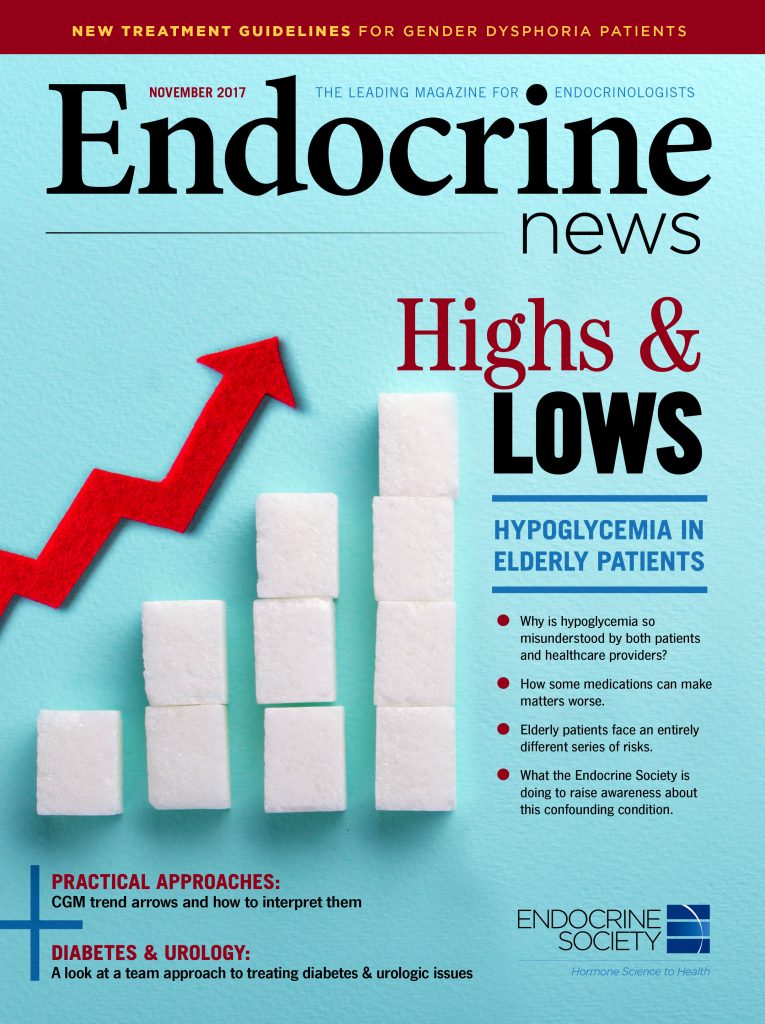 Hypoglycemia, a misunderstood diabetes complication, not only confounds the public and patients, but many healthcare providers as well. Elderly diabetes patients with hypoglycemia are especially vulnerable to this dilemma.

Mary M. Julius, RDN, CDE, clinical coordinator of Diabetes Self Management Education and Support and a research dietician and nutritionist at the Department of Veteran’s Affairs in Cleveland, Ohio, treats an 86-year-old man who has had type 1 diabetes for 50 years. His wife passed away last August. “He said to me, ‘Mary, for the past 55 years, all I’ve had to do is sit down and breakfast would be there,’” Julius says. “’I’d sit down and lunch was there. All I had to do was eat.’ He is going to bed hungry because this is a new skill for him.”

Julius’s patient is one of many in the very complex realm of hypoglycemia, and the fact that he’s in the vulnerable population of elderly people with diabetes, it only compounds the complexities. According to Julius, missing a meal is the number one cause of hypoglycemia, and elderly patients are at a higher risk of missing a meal than the general population. These patients are already frail at baseline, and older people tend not to eat as much anyway, whether they’re just not hungry or they suffer from food insecurity, but more on that later.

Hypoglycemia remains a complication of diabetes that’s not entirely understood. There still seems to be a lack of awareness among the healthcare community and the public, even among people with diabetes. For instance, hypoglycemia just isn’t as appreciated or respected among people with type 2 diabetes or sometimes even the physicians who treat them. Patients with type 1 diabetes are more likely to receive education on hypoglycemia, since low blood sugar is a common complication. However, patients with type 2 diabetes might not even know they can experience hypoglycemia.

“Sulfonylureas are particularly bad actors in causing hypoglycemia in the elderly. If you’re an older patient, you’re more likely to be on an older drug — like sulfonylureas. Glyburide, in particular, can cause prolonged hypoglycemia in older patients. This group of patients may also lack the financial resources to obtain newer medications that don’t cause hypoglycemia.” – Robert W. Lash, MD, professor of medicine, University of Michigan, Ann Arbor

“For most patients with type 2 diabetes, most clinic visits are focused on finding ways to bring glucose levels down,” says Robert W. Lash, MD, a professor of medicine at the University of Michigan in Ann Arbor. “This emphasis on getting the A1c to goal, particularly when diabetes is only one of many medical issues, puts questions about hypoglycemia way down on the list of topics to cover.”

Quantity Versus Quality of Life

The first big step in reducing hypoglycemia is understanding these complexities. Hypoglycemia is an especially difficult problem in the elderly population, because there are usually competing priorities in care. “On the one hand, there’s the priority for good glycemic control, however one defines ‘good,’” says David C. Aron, MD, MS, professor of medicine and epidemiology and biostatistics at Case Western Reserve University School of Medicine in Cleveland. “On the other hand, there is quality of life, so it’s quality versus quantity of life.”

Julius, who was diagnosed with type 1 diabetes in 1975, says she doesn’t feel comfortable with an A1c below 7%, even though that might fly in the face on conventional medical wisdom. “The last time I went to an endocrinologist, they were not happy with my A1c, but they didn’t ask what my goal was,” she says. “And my goal really is to be between 7 and 8. Not to be a 6.7 or 7.0. I’m really comfortable with a 7.5, 7.6. I don’t like being above 8 but I don’t care if I am. And I think that people should be proud of me, not upset when I have an elevated number. And not interrogate me and not beat me up because there was a number that was too high.”

Julius says she fears most another episode of food insecurity, defined as not having enough food to eat for an entire month, which could then lead to another severe hypoglycemia episode, like when she fell asleep in traffic. And while many might associate food insecurity with lower income, Julius stresses that it can happen to anyone. Research appears to back up her claim.

According to a study by Berkowitz et al., published in PLOS earlier this year, food insecurity doubled from 2005 to 2012, to historic highs. Another study by Wang et al., published in Public Health Reports in 2015, reported that of the 6,709 veterans enrolled in the study, 1,624 (24%) reported being food insecure. “Food insecurity was independently associated with being African American, earning $25,000/year, recent homelessness, marijuana use, and depression. Being food insecure was also associated with worse control of hypertension, diabetes, HIV, and depression,” the authors write.

“I think food insecurity is a relatively unknown problem,” Aron says. “And it’s masked in a way by the obesity epidemic. How can we have food insecurity and increasing obesity at the same time?”

And here again is another of these vicious cycles. Food insecurity is more prevalent in households that include a person with diabetes. The cost of treating diabetes is expensive, and the costs keep increasing. “You’re given a choice between do I eat or do I buy my medications?” Aron says.

Adverse drug events are the other major culprit in hypoglycemia. Insulin ranks up there along with anticoagulants and opioids when it comes to the risk of adverse drug events. “When endocrinologists are taking care of older patients with diabetes, we make a special effort to avoid insulin and sulfonylureas,” Lash says. “We tend to forget that insulin is one of our highest-risk medications, along with opioids and anticoagulants. When you add in the potential for dosing errors and the possibility of a missed meal, insulin becomes an increasingly risky medication.”

And elderly patients can often get caught in the trap of non-medical switching of their insulin. They could be taking insulin that comes in a blue pen that tells them to take 45 units once a day, then receive a green pen that tells them the same thing, not realizing they’re supposed to replace the blue pen with the green one, so they take both. “It just adds one more level of complication to an already complex medical regimen,” Lash says. “These are patients who may have significant comorbidities, or who may not be as knowledgeable about how to reach their diabetes treatment team.”

Steps are being taken to address these concerns. On September 2, the Food and Drug Administration held a meeting with providers, payers, patient advocates, and government representatives to discuss mitigating risk factors and reducing hypoglycemic events, and the Endocrine Society has launched the Hypoglycemia Quality Improvement Project (HQuIP). Again, this a complex issue, and there won’t be any easy answers right away.

For Aron, this is going to involve physicians changing the way they think. A target of A1c less than 7% might not be the standard for everyone, and there needs to be honest discussions among physicians and their patients, and payers need to take notice when that happens. “Personalized medicine has always been the essence of medicine,” he says. “I don’t think that it’s a secret that shared decision-making takes time. And the one thing that is not valued from a reimbursement perspective, is time not doing mechanical procedures.”

“Personalized medicine has always been the essence of medicine,” he says. “I don’t think that it’s a secret that shared decision-making takes time. And the one thing that is not valued from a reimbursement perspective, is time not doing mechanical procedures.” – David C. Aron, MD, MS, professor of medicine and epidemiology and biostatistics, Case Western Reserve University School of Medicine, Cleveland, Ohio

He gives an example: “You are an endocrinologist in practice, and you’re on the hook for a performance measure. Let’s just say that this patient meets the NCQA criteria for A1c less than 7%. Let’s say, for the sake of argument, they’re on oral agents, and they have an A1c of 7.1%. So what are you going to do? You’re going to tell them to go on insulin so you can get it to 6.9%? What’s the incremental value to the patient? And what’s the incremental negative value of taking an additional drug, or an additional drug that you have to inject yourself with? That’s one of the reasons why I’m not a fan of dichotomous measures.”

Lash, who is the chair of the Society’s HQuIP steering committee, says that in addition to reducing the number of patients becoming hypoglycemic, they also want to raise awareness. Physicians should be asking their patients with diabetes about hypoglycemia as often as they ask them about caring for their feet.

On Point from the Endocrine Society

In 2016, the Endocrine Society created the Hypoglycemia Quality Collaborative Strategic Blueprint. Created as a resource to increase awareness of hypoglycemia and promote actions to reduce its incidence, it can be found online.

“We also need to consider how to align provider reimbursement with a range of diabetes treatment goals, including glucose control and the prevention of hypoglycemia,” Lash says. “Physicians, like all people, respond well to thoughtful incentives. Finding ways to move hypoglycemia prevention up on everyone’s priority list will pay real dividends, in patient safety and reduced medical cost.”

Julius says that she would like to see those involved in diabetes care asking their patients whether they’re going to bed hungry, even if they’re not food insecure but simply lack the skills to feed themselves, like her 86-year-old widower patient. She was able to find a solution to this problem by telling him to eat a bowl of cereal and milk when he can’t decide what to eat, and to alter his insulin injections. “Later he’ll be able to think of more things to do,” she says, “but right now, safe is the goal.”