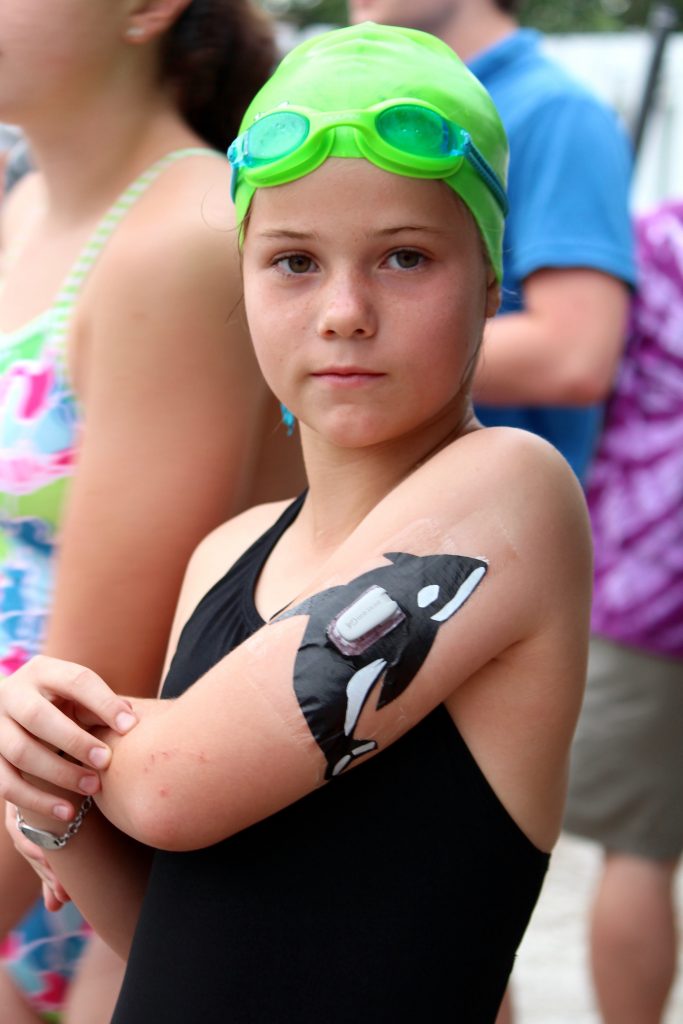 Virginia tween Claire Engler joins the #WeAreNotWaiting movement with a do-it-yourself artificial pancreas that not only scored her a big prize at her middle school’s science fair, but it has also greatly improved her glycemic control.

Claire Engler has had type 1 diabetes for a decade — but for the past six months, her glucose has been almost in the nondiabetic range. The 12-year-old credits this impressive control to the “artificial pancreas” she was showing off recently when Endocrine News encountered her at the Burley Middle School Science Fair in Charlottesville, Va., where she took a top prize.

Claire did not invent the system. She teamed up with her father to implement a do-it-yourself rig based on the Open Artificial Pancreas System (OpenAPS) project. [See Disclaimer].

“When I heard about the DIY artificial pancreas, I knew right away that was what I wanted to do, both to be healthier and because I thought it would be an awesome project. At first my dad did not think it was realistic, but after we looked into it more, he was on board,” Claire says.

Claire was two years old when one night her parents heard her running the bathroom faucet because she was unable to slake her thirst. For her physical therapist mother, Rebecca, this was the smoking-gun symptom of diabetes, and she and Claire were at her pediatrician’s office the next morning. And from there they were sent to the emergency room.

They were overwhelmed by a diagnosis they found “more stressful than bringing home a newborn,” Rebecca says, adding that they read everything they could find to educate themselves. After about six months of giving Claire insulin shots, their research showed that Claire could benefit from using an insulin pump.

Claire’s father, David, amassed a stack of studies to show their pediatric endocrinologist, only to be told, “I wouldn’t put a child that young on a pump.” They found a physician in Richmond who agreed with them about the value of a pump and for the next few years made the 70-mile trip down the interstate for Claire’s care. David says a pump can be particularly effective for toddlers because they fuel themselves with lots of snacks rather than meals. 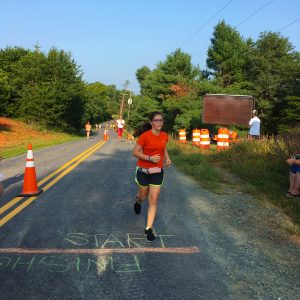 By the time Claire was three, she was also on a continuous glucose monitor (CGM) — after her parents documented its advantages well enough to convince their health insurance company to cover it.

So, it’s not surprising that someone growing up with the latest technology would be excited to hear about the OpenAPS project. The project was started by a data analyst named Dana Lewis, a type 1 diabetes patient who simply wanted to make the alarm on her CGM loud enough that she wouldn’t sleep through it. As one thing led to another, she and her husband Scott Leibrand, a computer network and systems engineer, developed algorithms using the CGM readings to make insulin dose recommendations. When another member of their online community found a way for communicating with her insulin pump, they “closed the loop” on the feedback system. They shared their success online, and continued development of the open source, crowd-sourced system.

“When I heard about the DIY artificial pancreas, I knew right away that was what I wanted to do, both to be healthier and because I thought it would be an awesome project.” – Claire Engler, 12, type 1 diabetes patient, Charlottesville, Va.

The basic components of the OpenAPS artificial pancreas are a CGM, insulin pump, smart phone, and small computer to process the information and communicate with the web.

The choice of pump is crucial because the user needs to be able to configure it to accept outside commands for insulin delivery, a process the OpenAPS guides the user through. This function exists in some older Medtronic models, but not newer ones. “Newer insulin pump models have more advanced security features,” says Pamela Reese, a spokesperson for the Medtronic Diabetes Group. 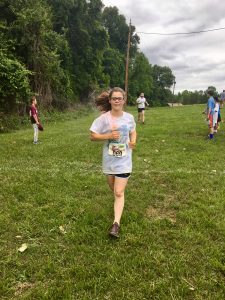 Manufacturers of medical devices have a strong incentive to prevent users from making modifications that deviate from their Food and Drug Administration-approved functioning. The Englers found the old-model Medtronic on Craigslist, and drove several hours to a rendezvous at a Cracker Barrel restaurant in southwest Virginia to buy it.

Claire’s computer provides Wi-Fi capacity to upload her CGM readings to the OpenAPS website, where algorithms calculate her upcoming insulin needs for communication to her pump. Claire had to get approval to use her school’s Wi-Fi. School administrators were happy to cooperate when she informed them of the reason she needed it.

Claire’s iPhone displays her CGM readings, insulin recommendations, and trend lines — and so do her parents’ phones, providing them peace of mind and the opportunity to intervene if needed.

The system’s results have been striking. “My A1C decreased from an average of 7.5% — ranging from 6.9% to 8.0% — over almost ten years of diabetes, to 6.0% in my first six months of OpenAPS use,” Claire says. “This is almost to the non-diabetic range. This happened at an age when A1C is usually at the highest due to body changes and insulin resistance.”

Before the OpenAPS, Claire had so many hypoglycemic episodes that she’d developed unawareness and did not recognize the sensation. After a month or two on the system, she had fewer hypoglycemic episodes, and could feel them when she did. Her body was also more attuned to detecting high blood sugar. 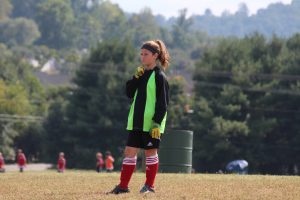 The system is not entirely automated. She gives herself a manual bolus when she eats, which is considered a safety feature of OpenAPS software. “I do fewer fingersticks. Most of my fingersticks now are to check Dexcom accuracy before I give myself a large dose of insulin for meals. I still do checks to confirm a high or low reading before treating. Exercise, stress, and miscalculated meals can lead to rapid changes that Open APS cannot keep up with,” Claire says. She needs fewer overnight checks, and generally wakes up with a good blood glucose level. Before this system, “my blood glucose was very unpredictable when I woke up.”

The OpenAPS website notes that it “is not an FDA-approved system or device. It’s not manufactured or sold anywhere in the world. It’s an open-source designed system that you can choose to build yourself. The DIY part of OpenAPS is important, because there’s no customer service if it breaks or stops working — you’ll have to fix it yourself. Individuals who build an OpenAPS are essentially doing an experiment, which they have a right to do to/by themselves. That is not a regulated activity by the FDA.”

“My A1C decreased from an average of 7.5% — ranging from 6.9% to 8.0% — over almost ten years of diabetes, to 6.0% in my first six months of OpenAPS use. This is almost to the non-diabetic range. This happened at an age when A1C is usually at the highest due to body changes and insulin resistance.” – Claire Engler, 12, type 1 diabetes patient, Charlottesville, Va.

While Claire’s determination and overall attitude is a clear indicator that she will undoubtedly overcome any obstacle that may present itself in the future, creating a homemade CGM from a disparate collection of components is not what most endocrinologists would recommend. 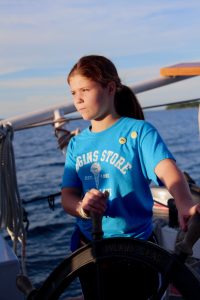 “Claire is certainly an inspiration with a wonderful can-do spirit, but we continue to recommend that patients stick to FDA-approved systems,” says Endocrine Society chief professional and clinical affairs officer Robert Lash, MD. “With diabetes-related technology developing so quickly, patients and physicians will be able to choose from a growing number of innovative, safe, and effective devices.”

The 600-plus people currently using the OpenAPS system are those who have access to the technology and know-how to implement its slogan of “#WeAreNotWaiting to reduce the burden of type 1 diabetes.” The Englers certainly benefited from David’s professional work as a software engineer, but he says that after getting the software downloaded, he made sure that Claire did most of the work of getting the system running. 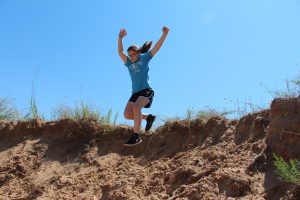 In June 2017, Medtronic launched the MiniMed 670G, a “hybrid closed loop” insulin pump system that “mimics some of the functions of a healthy pancreas” and “adjusts insulin based on CGM readings,” according to the company’s website.

As one other example — also based in Charlottesville — a system developed at the University of Virginia (UVA) featuring a reconfigured smartphone running advanced algorithms that is linked wirelessly to a blood-sugar monitor and an insulin pump is in the final rounds of “a large-scale trial run by UVA at seven sites across the country. If successful, this study should help take the new system through FDA approval and out there in a year,” according to Boris Kovatchev, PhD, a developer of the system and director of the UVA Center for Diabetes Technology.

— Seaborg is a freelance writer based in Charlottesville, Va., He wrote about research breakthroughs regarding the male birth control pill in the June issue.

Endocrine News and the Endocrine Society does not advocate patients tampering with commercially available glucose-monitoring equipment. However, we felt that this story should be shared with endocrinologists who might have patients currently using or considering creating such a device.  — Editor