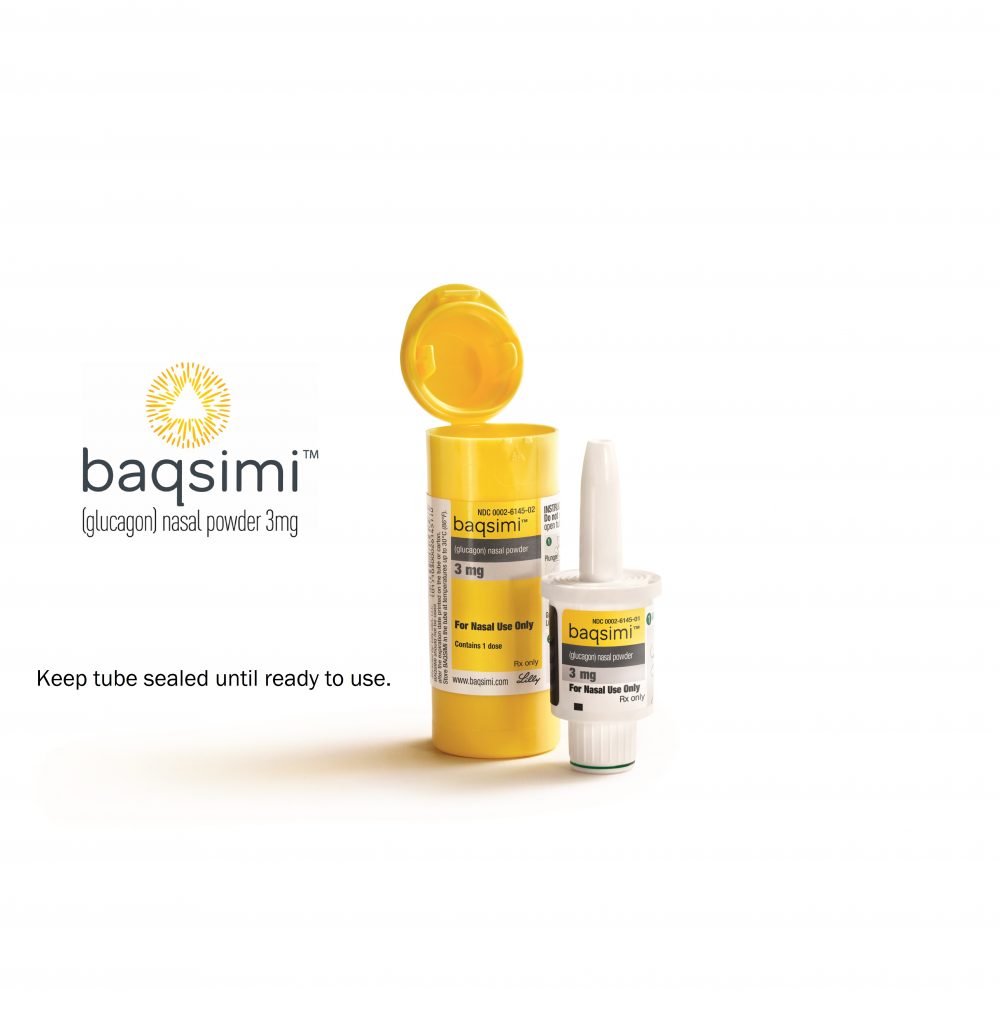 In July, the U.S. Food and Drug Administration approved a nasal powder glucagon therapy for the emergency treatment of severe hypoglycemia that can be administered without an injection. Eli Lilly and Company is marketing the drug as Baqsimi. The therapy has been approved to treat severe hypoglycemia in patients with diabetes ages four and older.

Baqsimi is a powder administered into the nose and will come in a single-use dispenser that can be given to someone suffering from a severe hypoglycemic episode. “Until now, the only glucagon treatment available was a kit that required a number of steps including reconstitution and an intramuscular injection,” says Henry Anhalt, DO, vice president of Medical Affairs at Science 37 in Los Angeles.

“There is no need to reconstitute it by injecting the liquid in the powder vial, dissolving it, then drawing back the liquid in a hurry while the person with diabetes is unconscious or suffering a very low glucose and unable to help him/herself,” says Grazia Aleppo, MD, FACE, FACP, a professor of medicine at the Feinberg School of Medicine at Northwestern University in Chicago.

Injectable glucagon has been approved for use in the U.S. for several decades. The efficacy and safety of Baqsimi nasal powder glucagon to treat severe hypoglycemia was evaluated in two studies of 83 and 70 adults with diabetes, comparing a single dose of Baqsimi to a single dose of glucagon injection in causing a blood sugar response to insulin-induced hypoglycemia. Baqsimi adequately increased blood sugar levels. In a pediatric study of 48 patients older than the age of four with type 1 diabetes, similar results were observed.

“This is the first compact, portable, and ready-to-use rescue treatment for severe hypoglycemia,” Aleppo says. “Therefore, this treatment is groundbreaking because anyone will be able to deliver this rescue medicine; the previous injectable needed to be reconstituted and given intramuscularly, and very few people would feel comfortable giving this type of injection to a family member unless they were trained on how to give intramuscular injections. Also, potentially the patients could self-administer the nasal spray since it is a single dose and easier to administer than an injection.”

Baqsimi should not be taken by patients with pheochromocytoma or by patients who have insulinoma. Baqsimi should not be taken by patients with a known hypersensitivity to glucagon or the inactive ingredients found in Baqsimi, as allergic reactions may occur. Baqsimi also carries a warning that it should be used with caution by those who have been fasting for long periods, have adrenal insufficiency,  or have chronic hypoglycemia because these conditions result in low levels of releasable glucose in the liver. “Per the package insert, this medication is contraindicated in people who have pheochromocytoma because glucagon may stimulate release of catecholamines from the tumor and cause a rapid and dangerous increase in blood pressure,” Aleppo says. “[Baqsimi is also contraindicated] in people who are known to have an insulinoma (tumor secreting insulin) because it can transiently increase the glucose but also cause an exaggerated insulin release from an insulinoma and cause hypoglycemia afterwards.”

“People with liver disease and low glycogen stores (such as end stage liver disease) should not receive Baqsimi because glucagon would not work for them,” Aleppo continues. “Glucagon works by making the liver convert stored glycogen into glucose, which is released into the bloodstream to raise glucose levels; in severe liver disease the glycogen stores are very low and therefore not likely sufficient to convert to glucose and raise glucose effectively after glucagon.”

The most common adverse reactions associated with Baqsimi are nausea, vomiting, headache, upper respiratory tract irritation, watery eyes, redness of eyes, and itchiness. Side effects of Baqsimi are similar to injectable glucagon, with the addition of nasal and eye-related symptoms, such as watery eyes and nasal congestion, because of the way the drug is administered. “People who are having a hypoglycemic episode should consume glucose orally if they are conscious. If the patient is unconscious or unable to safely eat, glucagon treatment is in order. In the event that glucagon is indicated, either injectable or nasal is administered. If administered when not indicated gastrointestinal distress and vomiting may ensue,” Anhalt says.

“A new formulation of glucagon, much easier to use and less intimidating than an injection, is now available,” Aleppo says. “Endocrinology practices should stock it for patients in the event of severe hypoglycemic episodes taking place in their offices, patients should carry it with them when they are engaging in physical activity together with rapidly acting glucose sources (i.e., juice, glucose tablets, etc.), and it should be stocked in schools (where school nurses may need to administer it to children with diabetes).”