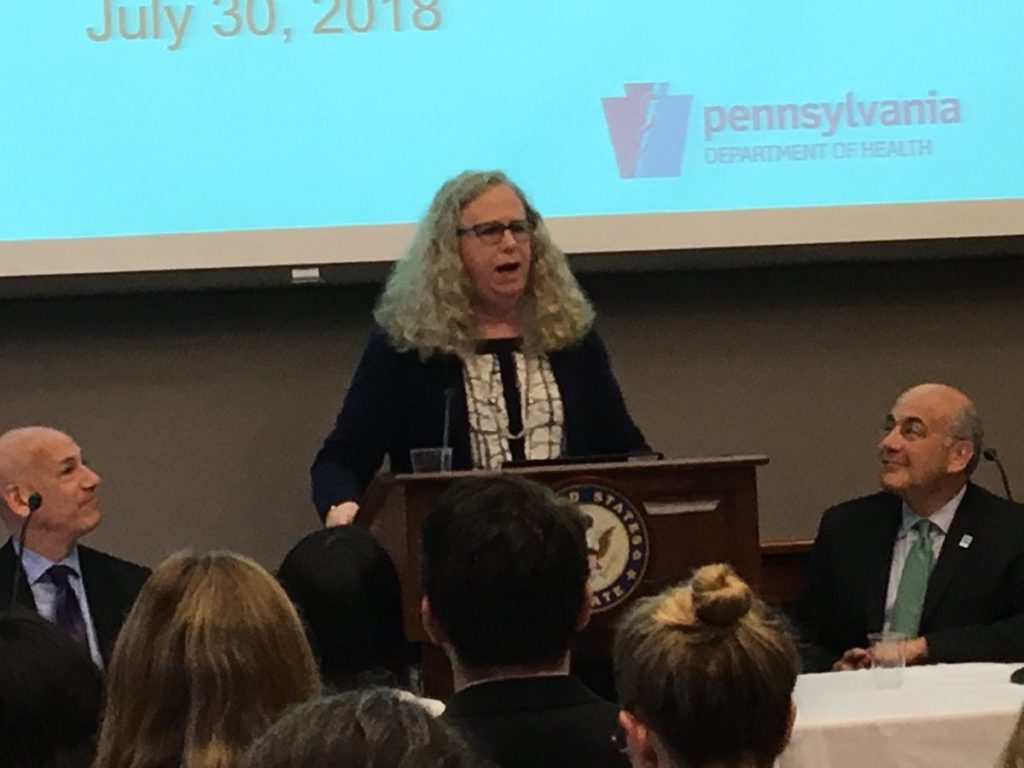 The speakers at the briefing consisted of Endocrine Society member Joshua Safer, MD, executive director of the Mount Sinai Center for Transgender Medicine and Surgery in New York City; Rachel Levine, MD, (pictured, left) the Pennsylvania’s Secretary of Health and a professor of pediatrics and psychiatry at Penn State College of Medicine; and Karen L. Parker, PhD, director of the Sexual & Gender Minority Research Office, Division of Program Coordination, Planning and Strategic Initiatives of the Office of the Director at the National Institutes of Health in Bethesda, Md.

“Our attendees, who were from both sides of the aisle, had the opportunity to hear national experts discuss how research is informing our understanding of transgender medicine.” – Robert W. Lash, MD, chief professional & clinical affairs officer, Endocrine Society

The briefing was moderated by Robert W. Lash, MD, the Endocrine Society’s chief professional & clinical affairs officer, and was conceived to highlight the evolving approaches of treating transgender patients to members of Congress as well as their staffs. “We were delighted to be able to contribute to the growing awareness of the medical, legal, and public policy issues facing the transgender community,” Lash says. “Our attendees, who were from both sides of the aisle, had the opportunity to hear national experts discuss how research is informing our understanding of transgender medicine.”

In his presentation addressing an evidence-based approach to transgender medicine, Safer explained to the attendees about the biological underpinning to gender identity. “We are medical providers and scientists who may have hypotheses about medical strategies that may work but who then defer to the actual data when we have it,” he explains. “We provide the best care for our patients when we follow the science.”

Safer further adds that the credibility of the medical and scientific community in the greater community results from our evidence-based, scientific approach.  “Our sober, honest interpretation of the scientific data has contributed to a shift in the general community regarding approach to transgender individuals as well.”

At one point, Safer addressed the potential factors that determine gender identity and how these are viewed differently today than they were in the past. “It was widely accepted that gender identity was passive and could be manipulated externally only a decade or so ago,” he explains. “However, despite the lack of understanding of mechanism, the data for a durable biological underpinning to gender identity has shifted the care strategy entirely. Instead of devoting erroneous effort to trying to manipulate gender identity, the accepted establishment care model has shifted to aligning external anatomy with gender identity when medical intervention is sought.”

“We are medical providers and scientists who may have hypotheses about medical strategies that may work but who then defer to the actual data when we have it,” he explains. “We provide the best care for our patients when we follow the science.” – Joshua Safer, MD, executive director, Mount Sinai Center for Transgender Medicine and Surgery, New York

Parker discussed the research being done at the NIH, specifically research that addresses sexual and gender minority (SGM) research. SGM is an umbrella phrase that encompasses lesbian, gay, bisexual, and transgender populations, as well as those whose sexual orientation, gender identity and expressions, or reproductive development varies from traditional, societal, cultural, or physiological forms, according to her presentation.

Levine, who herself is transgender, approached the information from a more personal standpoint and attempted to dispel rumors that the general public – and even some healthcare professionals – may harbor towards transgender individuals. “It’s impossible to hate someone whose story you know,” she says, adding a quote from Yoda from the Star Wars films to illustrate her point: “Fear is the path to the darks side. Fear leads to anger. Anger leads to hate. And hate leads to suffering.”

She also addressed the number of health disparities that affect transgender people citing that at least one-third have experienced a negative reaction from a healthcare provider in the past year and 40% have attempted suicide in their lifetime. This is nearly nine times the average rate in the U.S. of 4.6%. “This is the result of bullying, harassment, discrimination, and violence that leads to these negative outcomes,” she says.

Lash says that it was a special privilege to hear from Levine, “a physician and policy maker whose perspective as a transgender woman called attention to the issues of discrimination and access to care that transgendered men and women still face,” he says. “We hope that sessions like these will help to shape the discussion of this important issue.”

The briefing on the Hill was just another component of the Endocrine Society’s continuing efforts to meet transgender patients’ needs through research as well as improve their access to quality care.  As part of its efforts to improve care for transgender people, the Society is advocating for no discrimination by providers or insurance companies; establishing medical intervention as the standard of care; transgender treatment should be covered by insurance; and increased funding for research.