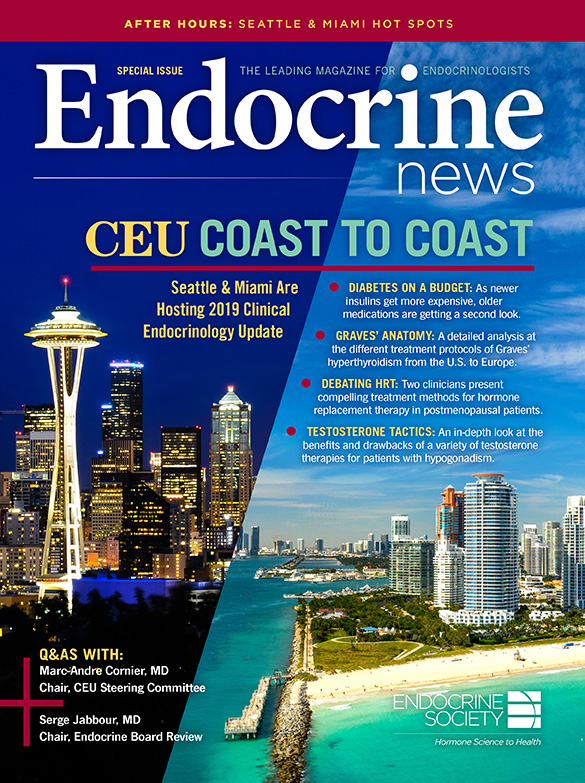 The advent of newer — often very expensive — drugs has driven up the cost of care for diabetes. But older, less expensive medications can often still get the job done.

Treating diabetes with lower-cost drugs might not only help a patient’s pocketbook, they might benefit the patient’s health as well.

That will be one important message of the Meet the Professor session on “Diabetes on a Budget” at the Clinical Endocrinology Update in Miami by David M. Nathan, MD, director of the diabetes center at Massachusetts General Hospital in Boston. A session with the same title will be presented at CEU Seattle by Marie E. McDonnell, MD, of Brigham and Women’s Hospital in Boston.

Newer and more expensive drugs have become “all the rage” in diabetes treatment, but a closer look reveals they may not be worth the cost, Nathan says: “These drugs are for the most part marginally better than some of the older, less expensive drugs, and they carry risks and costs, including financial costs,” Nathan says. “Every drug has advantages and disadvantages, and we must weigh the balance between the benefits and costs.”

In a time of rising drug costs, “if we are going to prescribe medicines, it is our responsibility to pay attention to the cost for the patient, because that is strongly linked to whether they actually take the medicine,” Nathan says.

With many reports of patients rationing insulin, the kind of insulin that physicians prescribe has become a focus. Newer and much more expensive insulin formulations have come on the market since the turn of the century. The insulin analogs were generally developed to treat type 1 diabetes, for which they work well. “Type 1 diabetes requires us to give insulin in a way that is as physiologic as possible, including using tools like insulin pumps and continuous glucose monitoring, and this is one area where the newer insulin analogs are better,” Nathan says.

But many physicians are prescribing them for type 2 diabetes, which can be problematic. One needs to look beyond the advertising claims and examine the studies comparing them, Nathan says.

For example, the oldest basal insulin on the market is NPH. It does lead to a peak level and is not perfect, but studies have found no clinically important difference compared with newer, more expensive formulations such as glargine. “Severe hypoglycemia — defined as episodes that require assistance from another person — remains rare in type 2 diabetes,” Nathan says. “The difference between NPH and glargine regarding severe hypoglycemia is close to zero, the total frequency of hypoglycemic events is not very different, and hemoglobin A1c levels are lowered similarly.”

“These drugs are for the most part marginally better than some of the older, less expensive drugs, and they carry risks and costs, including financial costs. Every drug has advantages and disadvantages, and we must weigh the balance between the benefits and costs.” –  David M. Nathan, MD, director, Diabetes Center, Massachusetts General Hospital, Boston

There are fewer incidents of hypoglycemia overnight with glargine, but the “total frequency of hypoglycemic events is actually not very different than with NPH, so that means people are having more hypoglycemia during the daytime,” Nathan says. “I often ask physicians when I lecture: Would you rather have your patient at home, where they can grab a juice box or whatever they use to treat hypoglycemia at night, or would you rather they have their episodes during the daytime when they are driving? I think that many of my colleagues haven’t carefully considered the data comparing insulins when it comes to type 2 diabetes. The benefits of these new insulins are frankly trivial compared to the cost.”

The cost of insulin has skyrocketed in recent years, with analog insulin leading the way at about $300 a vial. NPH has gone up greatly, too, but it is still generally only half that. For those willing to shop, Novo Nordisk distributes NPH product lines at outlets like Walmart and CVS for $25 a vial. Nathan says that part of the job of treating a patient may be working with them to find a source that they can afford.

Before a patient gets to the point of needing insulin, in the early stages of treating type 2 diabetes, metformin is still the first drug of choice. “Metformin is a well-tolerated drug and is incredibly cheap at $4 a month in most healthcare systems,” Nathan says. Sulfonylureas are another inexpensive and commonly used option, at about the same cost as metformin, although they have been “demonized” somewhat unfairly because of problems such as hypoglycemia and cardiovascular risk.

In contrast, newer drugs like SGLT2 inhibitors cost about $400 a month and GLP1 receptor agonists cost $600 to $800 a month, or about 200 times more. And as with the newer insulins, the benefits of the newer drugs may not justify the costs, and have been hyped in ways that may not survive a closer look.

For example, Nathan notes that some of the GLP-1 receptor agonists and SGLT-2 inhibitors have been shown “not only to be safe with regard to heart disease, but actually prevent heart disease.” But this interpretation overlooks that “these studies were performed in people who already had heart disease, and it was in those participants in which there was a benefit. The benefit was a 10% or 15% reduction in the next heart attack or the next stroke. The absolute benefit was relatively small, in the range of a reduction of 5 to 10 events per thousand patient years. The problem is that as these drugs are advertised, you only find the information that they are indicated for people with prior disease in the fast language in the television advertisement that everyone misses or in the small text at the bottom of the advertisement,” Nathan says. Yet many physicians seem to think this benefit will apply to the entire diabetes population.

Some of the newer drugs come with significant side effects. For example, some physicians may be attracted to GLP1 receptor agonists because they are associated with weight loss, in contrast to insulin and sulfonylureas, which are associated with a gain of five to 10 pounds. However, the weight loss with GLP1 receptor agonists is modest — about six pounds — and may last only a year. “The problem is that some of the weight loss is because the drugs can cause nausea, vomiting, and diarrhea. Probably 10% to 20% of patients who are started on those drugs say, ‘I hate it. I’m not going to take it,’” Nathan says.

“These expensive diabetes drugs are associated with a raft of side effects. The pluses and minuses need to be weighed.” –  David M. Nathan, MD, director, Diabetes Center, Massachusetts General Hospital, Boston

The SGLT2 inhibitors lower blood glucose by blocking glucose re-uptake by the kidneys. But that action puts abundant glucose into the urine, which leads to recurrent yeast infections. Even more worrisome, the drugs raise the risk of diabetic ketoacidosis, which is why the U.S. Food and Drug Administration turned down their use in type 1 diabetes.

“These expensive diabetes drugs are associated with a raft of side effects. The pluses and minuses need to be weighed,” Nathan says.

A final consideration is that widespread use of expensive drugs drives up the overall cost of healthcare. The cost of treating diabetes in the U.S. rose from $245 billion a year in 2012 to $327 billion in 2017. “Those cost increases are related to the drugs we are using. Somebody has to look out for the pocketbook or there won’t be any money to pay for anything. I don’t think we can ignore what this is costing all of us,” Nathan says.

— Seaborg is a freelance writer based in Charlottesville, Va. He wrote about the Endocrine Society’s clinical practice guideline on treating diabetes in older adults in the July issue.