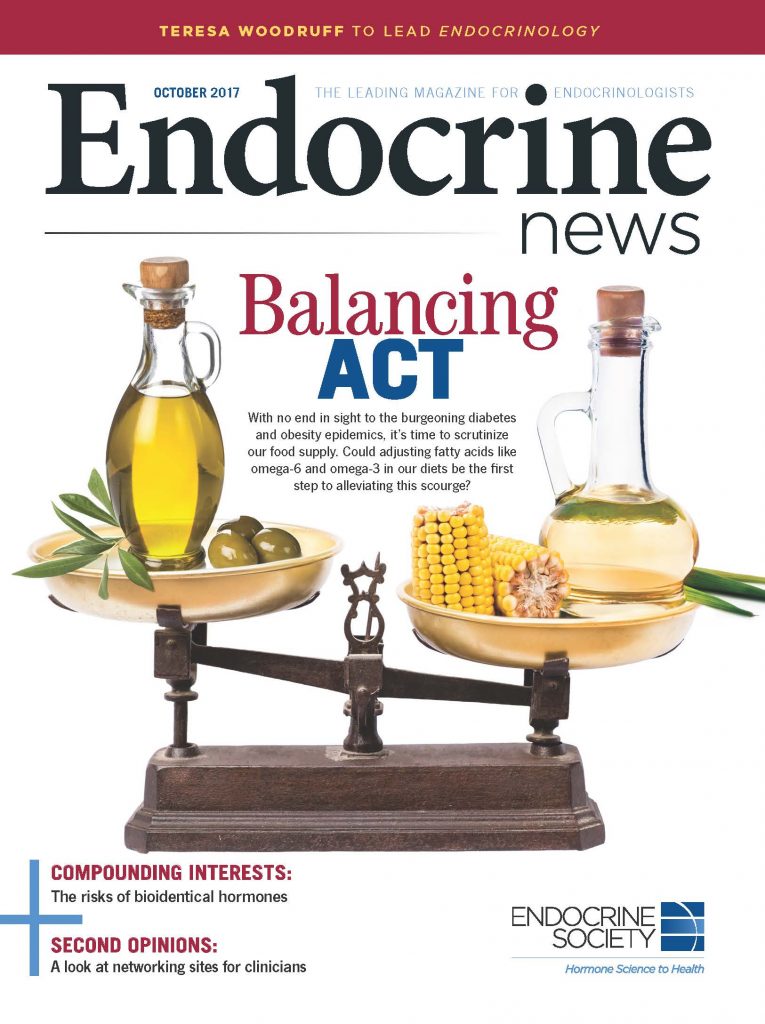 As the diabetes and obesity epidemics continue to flourish, a closer look at our food supply is needed. A new study suggests that getting the right amounts of fatty acids – especially omega-6 and omega-3 – back into our diets is the first vital step.

Last year, the British Medical Journal online journal Open Heart published an editorial by Artemis Simopoulos, MD, of the Center for Genetics, Nutrition, and Health in Washington, D.C., and James DiNicolantonio, PharmD, of Saint Luke’s Mid America Heart Institute in Kansas City, Mo., that concluded that all calories are not equal, and that to combat the growing obesity epidemic, we should focus more on restoring the correct balance of omega-6 and omega-3 fatty acids in our food supply.

As it stands, 1.5 billion people worldwide are overweight, while 500 million people are obese, leading the authors to conclude that the current “calories in and energy out” approaches have “failed miserably over the past 30 years.” Simopoulos and DiNicolantonio argue that we should be working to rebalance the ratio of omega-6 and omega-3 fatty acids to 1 or 2:1, since that was the ratio in the foods humans consumed as they evolved.

“Human beings evolved on a diet that was balanced in the omega-6/omega-3 fatty acids,” says Simopoulos. “During evolution, the ratio was about 1 or 2:1 whereas today it is at least 20:1 and in fact in some situations, even more than that.”

The authors point out that too much omega-6 promotes inflammation and is prothrombotic. In animal experiments, a high omega-6 intake leads to decreased insulin sensitivity and muscle and promotes fat accumulation in adipose tissue. Nutritional approaches with dietary omega-3 fatty acids reverse the dysregulation of the system, improve insulin sensitivity, and control body fat.

“Moving forward, the Endocrine Society’s role should be informing the public about what kinds of macronutrients are helpful to maintain a healthy body weight. If you consider obesity an endocrine disease, which it us, then the Endocrine Society’s role should be to gather the data and put out guidelines talking about what has happened to the food supply.” — Caroline Apovian, MD, Boston Medical Center, Boston, Mass.

“The time has come to return the omega 3 fatty acids in the food supply and decrease the omega 6 fatty acids by changing the cooking oils and eating less meat and more fish,” the authors write. “The composition of the food supply must also change to be consistent with the evolutionary aspects of diet and the genetics of the population.”

After World War II, the food industry increasingly featured oils from corn, safflower, sunflower, cottonseed, and soybeans in their products, because these oils were cheap. But these oils are high in omega-6 fatty acids. The hydrogenation of these cheap oils into trans fatty acids also led to increased production of trans fats, which the FDA limits today. Another important change was in animal feeds. Rather than the animals grazing, farmers started feeding the livestock grains chock full of omega-6, which led to changes in their muscle composition, which affected meat and dairy products.

The people of Crete used olive oil in their diet and ate sardines or herring, wild plants rich in omega-3 fatty acids, and their livestock were not grain-fed, not even the chickens. “My studies on the composition of the Greek egg clearly showed that non-grain-fed chickens (which is the normal way for chicken produced eggs) are balanced in the omega-6/omega-3 ratio, whereas the standard USDA egg from grain-fed chickens has a ratio of 20:1,” Simopoulos says.

These enormous changes in the oils used in the food supply were made not because there was any evidence of their importance to health, but because they were cheap, tasteless, and were much “lighter” in terms of appearance. “The food industry began to undermine olive oil about 30 years ago and promote extensively omega-6 rich vegetable oils as being “lighter” and gave the impression to doctors and their patients they had less calories,” Simopoulos says.

Simopoulos says that recent studies have shown that perinatal exposure of mice to a high omega-6 fatty acid diet (similar to Western diets) results in a progressive accumulation of body fat across generations, which is consistent with the fact that in humans, overweight and obesity have steadily increased in the last decades and emerge earlier in life. In human studies, high intake of omega-6 fatty acids during the perinatal period is associated with increased adiposity in the offspring, and the level of arachidonic acid in adipose tissue is associated with the BMI and overweight status of children.

But human studies can give conflicting results because they are based on dietary questionnaires. “People don’t remember exactly what they ate or how much,” Simopoulos says. “And depending on who is taking the history, you can get all kinds of responses and then do an analysis as to the amount of the omega-6 and omega-3 fatty acid content.”

“It’s hard to measure the ratio in a long-term study,” says Caroline Apovian, MD, an obesity expert with the Boston Medical Center, who was not involved in this editorial. “You have to know exactly what everyone is eating.” She describes her own study, in which the researchers delivered food to participants and had them keep food records for six months, but she says it’s impossible to know what the participants were eating in the meantime or if they were even eating the food that was prepared for them. Any further or more tightly-controlled study would be incredibly expensive.

However, Simopoulos sees a solution. A paper published in the European Journal of Nutrition last year by Lu Wang et al detailed a prospective analysis to determine the association of baseline red blood cell (RBC) membrane phospholipids of omega-3 fatty acids, omega-6 fatty acids, and the omega-6/omega-3 ratio and trans fatty acids with the longitudinal changes in body weight and the risk of becoming overweight or obese during a mean of 10.4 years follow-up. The researchers found that omega-3 fatty acids are inversely associated with weight gain, while omega-6 fatty acids, the omega-6/omega-3 ratio, and trans fatty acids are positively associated with longitudinal weight gain.

“The human study based on the Women’s Health Initiative by Wang et al is the best study that could have been done and that really was the impetus to do the editorial,” Simopoulos says. “The best biomarker is the analysis of omega-6 and omega-3 fatty acids of red blood cell membrane phospholipids, which tells you not only the amount of omega-6 and omega-3 from food intake, but also endogenous production due to genetic differences in the FADS1 and FADS2 desaturases. Furthermore, the amount measured that way indicates the amount in the body for at least three to three and a half months since a red cell survives 120 days.

“All patients should have their omega-6 and omega-3 fatty acid determined in RBC both at the baseline and during clinical intervention,” she continues.

Simopoulos and DiNicolantonio write in the editorial it is “the responsibility of the governments and international organizations to establish nutrition policies based on science and not continue along the same path of focusing exclusively on calories and energy expenditure.”

Some of these international organizations appear to have taken notice. Simopoulos spoke at two international conferences on the subject of this balancing act: the 4th International Congress: Science in Nutrition-Positive Nutrition in Milan, Italy in May, and the 10th Anniversary of the International Symposium on Immunonutrition in Madrid, Spain in July. The paper was translated into Chinese and distributed at a conference in Chongqing.

Simopoulos details what needs to be done from here:

For now, there seems to be a shift happening. More and more organic foods are popping up in grocery stores. More people are turning back to olive oil, and industry is working to reduce the omega-6 content of vegetable oils. “It will mean that the food industry will have to reformulate some of their products and they’re already doing that,” Simopoulos says. “But there is enormous interest worldwide in having a healthy diet for the prevention of chronic diseases. The most difficult part will be changing animal feeds because it is so much cheaper to feed the animals grains.”

“As a member of the Endocrine Society I feel very strongly that the Society should take a leadership role in the prevention and management of obesity since it is a metabolic disorder that affects the endocrine system and all aspects of human metabolism. Furthermore, the endocrinologists are in the best position to expand both the nutritional and genetic aspects of endocrine disorders.” — Artemis Simopoulos, MD, Center for Genetics, Nutrition, and Health, Washington, D.C.

Of course, this would just be one front in the attack on obesity. Other problems remain. Sugar intake still comprises 30% of calories, and 7% of total calories are sugar-sweet beverages, according to Apovian. And the underserved population is being hit the hardest, since they cannot afford to buy extra virgin olive oil, she says.

“Moving forward,” Apovian says, “the Endocrine Society’s role should be informing the public about what kinds of macronutrients are helpful to maintain a healthy body weight. If you consider obesity an endocrine disease, which it us, then the Endocrine Society’s role should be to gather the data and put out guidelines talking about what has happened to the food supply.”

“As a member of the Endocrine Society I feel very strongly that the Society should take a leadership role in the prevention and management of obesity since it is a metabolic disorder that affects the endocrine system and all aspects of human metabolism,” Simopoulos says. “Furthermore, the endocrinologists are in the best position to expand both the nutritional and genetic aspects of endocrine disorders.”

Bagley is the senior editor of Endocrine News. He spoke with Endocrine Society member Alaa Al Nofal, MD, about the impact of the travel ban in the September issue.