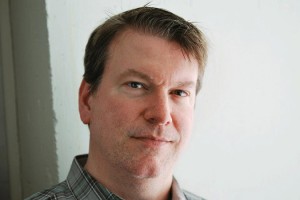 Pemberton admitted that his statement might sound shocking or surprising, but he said that the facts speak for themselves: “the prognosis for those with type 2 diabetes is much worse than for those with HIV,” he wrote. “The risk of stroke in newly treated type 2 diabetes is more than double that of the general population. People with diabetes are four times more likely to have cardiovascular disease than someone without diabetes. In 20 to 30% of people with diabetes, there’s damage to the kidney filtering system leading to kidney failure and the need for dialysis. Damage to the delicate vessels in the eye is a leading cause of blindness and damage to nerves is a leading cause of foot wounds and ulcers, which frequently lead to foot and leg amputations. For those with HIV, providing they take their medication, there are very few problems.”

Putting the discussion aside, this brought up an interesting conundrum: Instead of an “either/or” situation where a physician was charged with treating either HIV/ AIDS or diabetes, we wondered what the challenges would be in treating a patient with both. In this month’s cover story, “Parallel Protocols,” Endocrine News associate editor Derek Bagley writes about the challenges doctors face in treating patients with both conditions. As the article states, part of the dilemma is the fact that people with HIV and AIDS are now living longer due to a number of pharmacological developments. In turn, reaching an advanced age is often when chronic conditions such as type 2 diabetes develop. 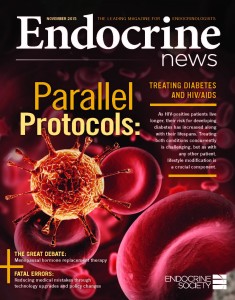 It’s a double-edge sword to be sure, but Kevin Yarasheski, PhD, a professor of medicine, cell biology and physiology, and physical therapy in the Division of Endocrinology, Metabolism, and Lipid Research at Washington University, St. Louis, Mo., says that he continues to advise patients to “quit smoking, consume nutritionally balanced meals, and engage in physical activity/exercise training.” Good advice regardless of pre-existing conditions.